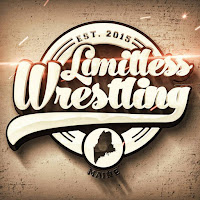 Limitless Wrestling promoted their second show on November 14th in Orono at the American Legion Hall and after everything good that I had heard about the first show in September I knew I couldn’t miss this one, and I’m glad I didn’t.

Top to bottom this was one of the finest wrestling cards I have ever attended in Maine and the best since the 2012 Robbie Ellis Cup in Fairfield.   A total of 8 matches including a 4 team tag match, a 5 man scramble, a women’s match, a no-dq match, and the card’s main event featured Ace Romero vs. Scotty Wild.

Anthony Greene has fast become one of my favorite wrestlers to watch on the independent scene since I first saw him back at MEW’s debut show.  This was my second time seeing Flip Gordon live and he too is extremely impressive in the ring.   This was the match that was I was looking forward to the most on the card and it did not disappoint.  Both men worked very hard with the match going back and forth until Greene got the win.  I would like to see Limitless bring them both back at all their shows.

The Fatal Four Way was next with The Influence winning their second match in a row getting the pin on Mantequilla.  I know one is scheduled for the next event so it seems this type of match will be one at each show.  The only team I had seen before was Da Hoodz and they were the work horses carrying this match from beginning to end.  For reasons unknown the Bash Brothers walked out before the finish signaling they didn’t need this.  The Influence are great and Caveman was in character the entire event, even intermission, he was just hilarious.

Mastone and Smashmaster was a slow methodical match but the two went at each other with Mastone repeatedly trying to hit his belly to belly suplex.  Smashmaster attempted a very impressive senton bomb off the top showing the big man has some agility.  I would like to see Mastone take on Ace Romero. 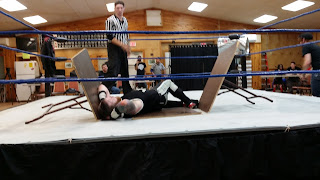 The last match before intermission was the no disqualification bout between Shane Marvel and Jeremy Leary.  This was Marvel’s last match in New England before moving to Arizona.   This would have been my least favorite match of the night, and it was still a good match. It was billed as no DQ, Marvel even brought out a trashcan of weapons, and yet the first 5 minutes they exchange holds mat wrestling.  Once they got into the brawling aspects of it, it was better but you don’t chain wrestle in a no DQ match. 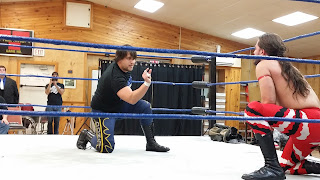 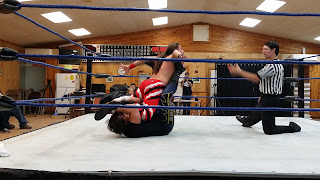 Tim Donst defeated “The Carnivore” Alex Mason in a great wrestling match.  Donst is a wrestler  that I have watched over the years in Chikara and now recently Combat Zone Wrestling where he was recently the CZW Wired Champion.  Earlier this year Donst had been diagnosed with cancer and after having his Kidney removed thought his time in the ring was over.  He was able to come back to the ring that he loves dearly, you can see that in an excellent documentary about Donst and his fight with cancer.

The five man scramble match was great; I really liked what Top Shelf brought with his inebriated comedic ways.  Xavier Bell if he continues to build is going to be a machine, the finish with the big ole piledriver on Nelson was great.  I like the piledriver and it’s banned on WWE so we don’t see it much.   Everyone held their own in the match bringing a piece of themselves into it. 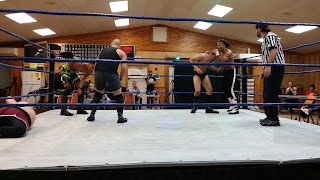 After the bout Lee berated the camera man who wasn’t going to take his crap leading to Randy making them a tag team in the Four Way Tag at the next show.  I’m pretty knowledgeable I feel, but I was a bit lost on this one.  Randy eluded to the fact that the camera guy was training or he could have just been giving Lee crap.  My buddy Roy has some inside info and told me that he has been training and has had some matches but I didn’t think it was clear.

A rare ladies match pitting Maximum Mecca against Sonya Strong.  I had seen only one Mecca match and that was on NECW TV earlier that day, never heard of either prior to that.  I gotta say I was very impressed by both of them.  Sonya has some great feet landing a devastating kick combo at one point.  Mecca is full of charisma and both worked their asses off!  I would love to see both of them back in action at Limitless Wrestling. 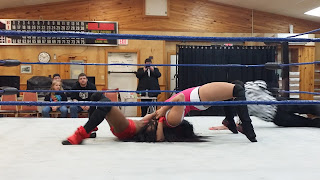 Main Event was explosive and hard hitting as Ace Romero and Scotty Wild beat the tar out of each other.   Romero can fly over the top rope in a way a man his size shouldn’t be able to.  You could see the welts and handprints on Wild’s chest for the chops he received from Romero.  Wild gave just has much as he received lighting up Romero with chops of his own.  After his victory Romero announced he would be fighting AR Fox when Limitless returns in January. 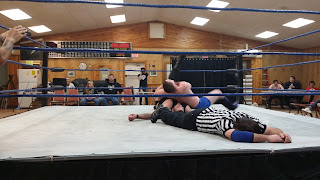 Like I said earlier one of the best shows I have seen in a long time where even worst match on the card was a really good match.  My buddy Mikey commented on the ride home that he thought this show was better than their first.  I cannot stress enough that if you are a fan of wrestling you need to make the drive to Limitless it’s well worth it.

Limitless Wrestling returns to the American Legion in Orono on Saturday January 30, 2016 tickets are on sale now at www.limitlesswrestling.com

I didn't get the best pictures with my phone, however Kevin Egan post some great shots on his Fans of Wrestling Facebook page.  Killin' & Thrillin' album 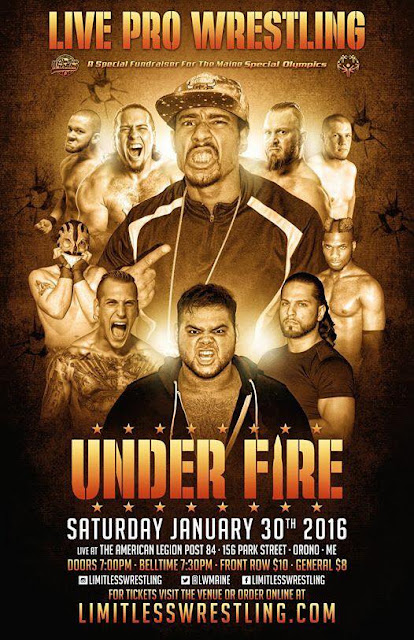