Mikey and I headed north to Brewer for Vacationland Pro Wrestling to check out the barbed-wire death match between Mason X & JP O'Reilly.

Mikey wanted to grab some dinner at Mad Kat & Company, the old city side restaurant.  The food was very good, and it's extremely nice inside.  Roy joined us at Mad Kat and the three of use headed over to the venue, an old warehouse that operates as an indoor flea market.  It appears as though they push the merchandise aside to make room for the ring and chairs. 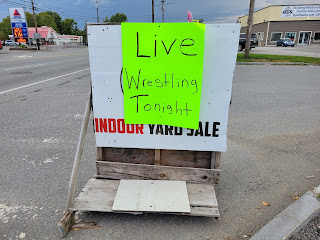 This was my first time going to a Vacationland Pro Wrestling show, I had forgotten that Matt Sydal was advertised for the show, the barbed wire death match was the draw for me.

This was a solid opening match featuring brawling inside and outside the ring.  Zakk Ramses is a big dude with a good ascetic look, didn't really get to see a lot of what he could do in the match but he looked good.  He hit NBK with a big chokeslam, he really got him up!  Moment then hit Ramses in the dick and pinned NBK to secure the win. 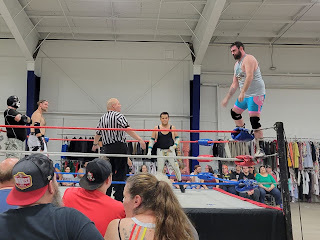 The ole teacher vs. student match.  Blade kept trying to interfere and Hess would chase him around the ring and hold him off.   Blade jumped on the apron as Lee was signaling for his finish on Nolan, Hess got on the apron jaw jacking with Bandit.  Nolan pushed Lee into Hess then rolled Lee up for a school girl pin getting the upset victory. 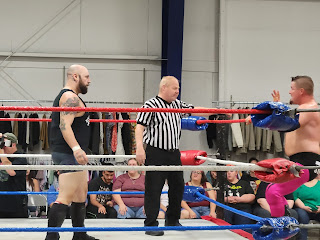 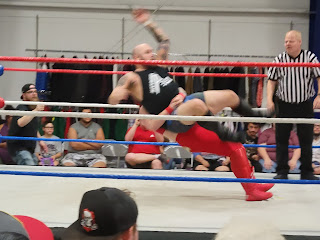 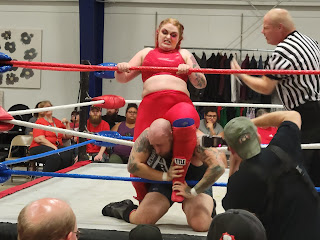 Post match Hess went after Lee for hitting him.  A bunch of people jumped in the ring separating them leading to Lee getting on the mic to try to say something, but the damn this kept cutting out.  Lee just yelled his point and challenged Hess to his debut match at the next Vacationland Pro show. 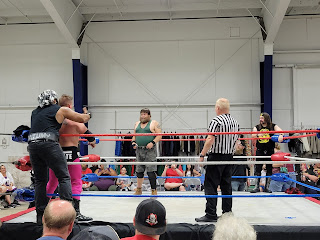 Larry came out crammed his thumb up everyone's butts, except his own, and took a beating for the majority of the match.  He made the tag to Primer who got a bit of offense in then Larry got back in the ring.  Primer went for a cross body, Bandit caught him, but Larry was right behind him tripping him allowing Primer to get the pin and the win for his team.

This was a very good match!  Honestly I can't believe that Matt Sydal was at the show wrestling at the indoor flea market. Not a lot of flippy shit in the match but it was crisp.  Sydal got the pin with a version of roll the dice. 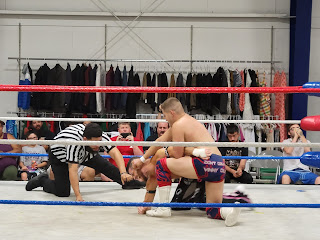 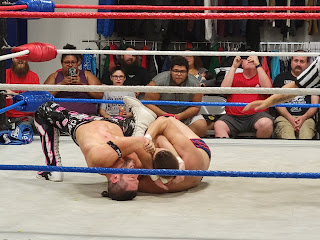 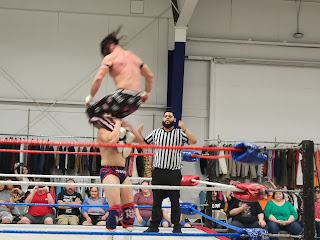 Great match, best on of the night!  Ace is Ace, and Ocean has been around a long time.  Ace got the pin after a sick package piledriver. 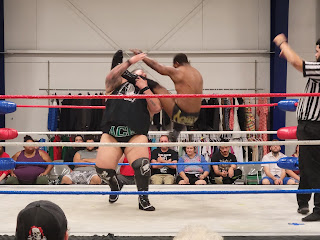 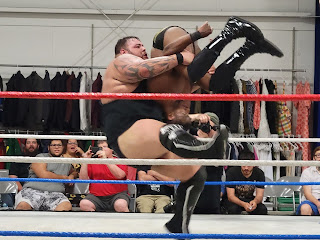 Jacob Drifter vs. Steve Off

My first time seeing Off, punk rocker gimmick, and a new look for Drifter.  Off got the pin. 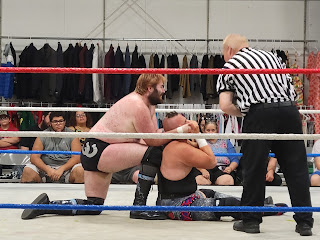 Mathews and Murphy dominated this match and really took it to Nuka for the majority of it.  Finally Nuka made the hot tag bringing in Logan who cleaned house causing the match to break down.  Logan had Mathews down for the three count but Murphy pulled the referee out of the ring breaking the county.  Nuka held Mathews and Logan went to hit Champ, who moved causing Logan to hit Nuka.  Feeling irrationally betrayed, Nuka spit mist in Logan's face leaving him susceptible to corner chaos and the Competition picked up the win. 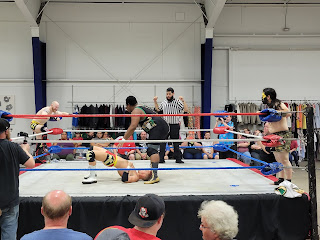 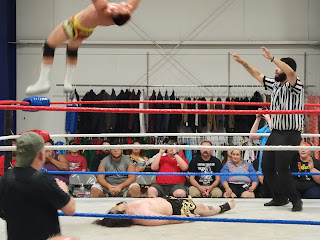 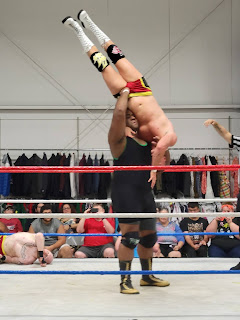 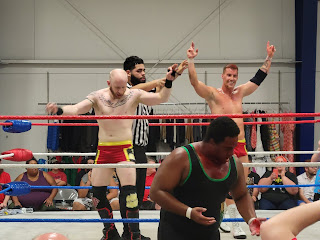 After this match they took an intermission to set up the ring for the main event. I swear to God, and I'm not the only one, that swears this match was advertised as a no rope barbed wire match.  We were all curious to see how they were going to rig the barbed wire, but then they started wrapping the ropes with the barbed wire.  I'm not complaining but that's not what we expected.  They had some other weapons around the ringside as well. 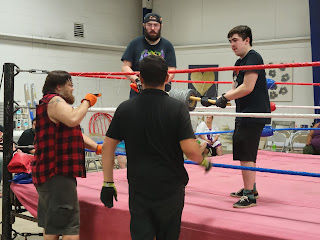 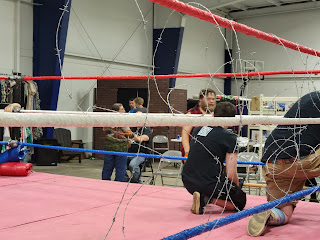 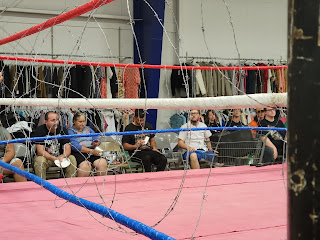 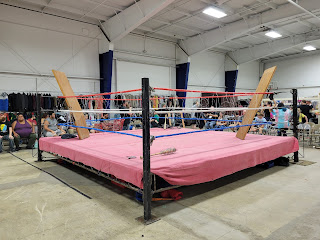 Mason X is out first with NBK.  I'm not sure which how many Mason X's there have been but as he made his entrance we starting listing off all the people that we were aware of that portrayed Mason X.  The character essentially work coveralls and a Jason Voorhees style mask.  This version wore the mask but had on a sleeveless shirt, work pants, and boots.

O'Reilly came out also wearing a Mason X mask, no Penguin he was serious, as he should be.  O'Reilly is no stranger to the death match, he competed in the 2017 IWA Mid-South "So You Want To Be A Death Match Star?" tournament.

Both guys get in the ring, intense stare down and then they locked up and O'Reilly transitioned into a side headlock!  We weren't expecting that. Mason was first into the wire, and then O'Reilly ripped Mason X's mask off.  Wasted opportunity to have him lose the mask in a match.

The wrestled on the floor, hit each other with barbed wire bats, chairs, the ring post, I mean we were several minutes in and no one was visibly bleeding.  Before the match the warned if anyone had a faint of heart or was squeamish to blood they should leave.  Chad Epik promised us that blood would fall like rain.  No one was bleeding, that was not lost an anyone watching this.

O'Reilly got thrown or dove at Mason who moved and he fell very hard on a barbed wire wrapped shopping cart.  The battled on the floor some more, made it back into the ring.  The ref got wrecked by Mason, NBK attacked O'Reilly when he got the upper hand on Mason. Chad Epik got in the ring and I think poured hot sauce in his mouth, I couldn't tell.  NBK fled to the back and Mason backed down. 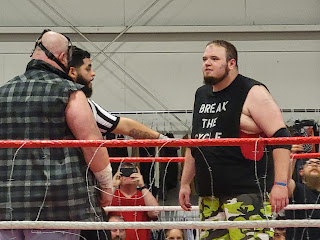 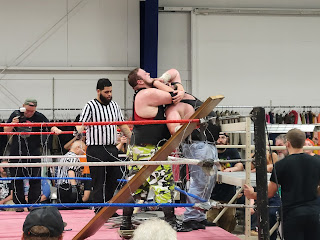 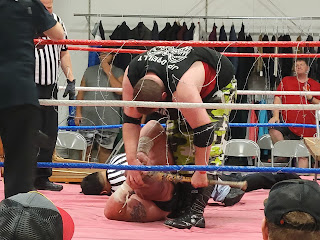 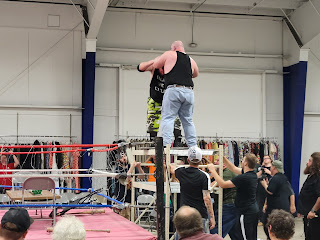 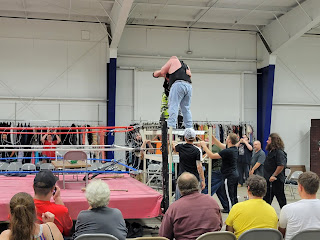 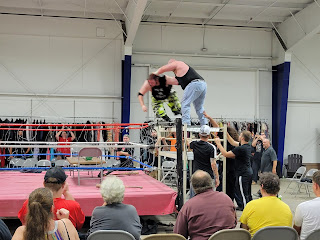 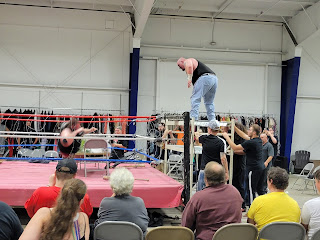 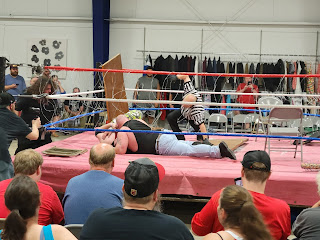 O'Reilly got busted open and was bleeding at this point.  They set up a barbed wire door on two chairs with a bundle of light tubes on it.  They climbed up on a riser next to the ring and Mason threw O'Reilly off crashing onto the mat.   Mason climbed down and got the pin winning the match.

Here's my gripe, Mason X wasn't visibly bleeding, now I'm not blood thirsty but if you are going to willing participate in a barbed wire death match where the promotion is warning fans of the violence with blood and gore then you need to deliver.  If you not willing to do it, that's fine, don't put yourself in that situation.  I'm not saying that Mason didn't cut up or hurt, or put himself in danger, but it wasn't evident that he did by my or anyone else watching.  O'Reilly delivered.

In the end, I spent Saturday night hanging out with my friends watching wrestling, and that's never going to be a bad night. 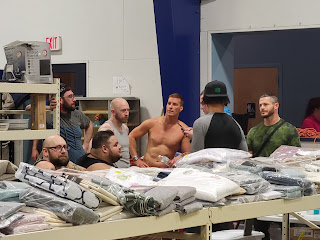 Thank you for reading, please leave a comment, check out my other posts, and if you want like my blogs Facebook page.  You can also head over to Amazon and pick up a copy of my new book Limitless Wrestling: The First Five Years, or any of my other books as well.