Faby Apache is one of the greatest women wrestlers in the word and quite possible the greatest Luchadora of all time.  Part of the famed Mexican wrestling Apache family, she along with her sister Mari Apache and Step-Mother Lady Apache, was trained by her father Gran Apache.  She began her in ring career in January 1998 under a make as Lady Venom. 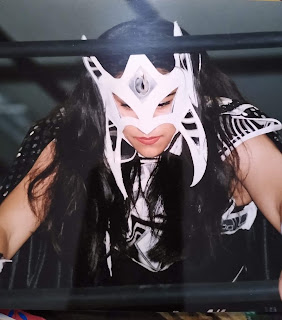 In March 1998 she and her sister Mari debuted in Japan for the ARSION joshi promotion staying in Japan through the end of May 1999. While with ARSION she continued her training with Aja Kong and Mariko Yoshida.  From October to December 1998 Faby teamed with her sister Mary in Twin Tags of ARSION League to crown the first tag team champions.  It was a round robin tournament consisting of seven teams, Faby & Mary finished in 4th place with six points. 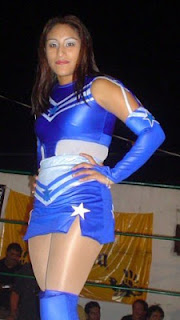 In June 1999 She returned to Mexico wrestling for the Lucha Libra AAA Worldwide promotion where her father Gran Apache was a trainer and active wrestler.  She competed in the promotion for the remainder of the year.

In January 2000 she returned to ARSION wrestling full time for the promotion until June 2002.  She competed in the Sky of ARSION League 2001 tournament which lasted from September 11, 2001 until October 27, 2001.  Faby winning six matches and losing two en route to the finals where she defeated noki-A to win the vacant Sky High of ARSION Championship.  She would go on to hold the title for 113 days.

Also during this time in Japan she competed on a CMLL promoted event in Japan at Korakuen Hall on August 4, 2000 teaming with her sister Mary defeating Ayako Hamada & Linda Star.  She teamed with Ayako Hamanda in the Twin Tags of ARSION League 2001 earning five points finishing in 3rd place.  The tournament lasted from November 3rd to December 8th.  On June 7, 2002 she competed on a New Japan Pro Wrestling show in a rare women's match at the Nippon Budokan.  It was a 10 woman tag team encounter where Faby's team came out on the losing end.

September 1, 2002 she returned to AAA teaming with Lady Apache defeating Cynthia and Esther Moreno.  She has stayed in Mexico with Lucha Libre AAA being her home promotion to this day, but has also competed in some Mexican and United States Independents over the years. In January 2005 she competed on a AAA promoted show at Korakuen Hall, and while in Japan wrestled for JWP.

On August 1, 2004 she and her father Gran Apache won the AAA World Mixed Tag Team Championships.  They would hold the titles for 350 days vacating them on July 17, 2005 as Faby was on maternity leave.  She would hold the titles a total of four times for a combined 1086 days with partners Aero Star, Pimpinela Escarlata, and Drago.

In 2005 her then real life husband luchador Billy Boy became involved in a storyline where Gran Apache did not approve of Billy Boy stating he was not worthy to be with Faby.  This lead a long standing feud that pitted Faby against her family for many years.  Billy Boy began wrestling under a mask as Alfa where he earned Gran Apaches respect stating Alfa would be a good husband for Faby.  Alfa then unmasked revealing himself to be Billy Boy angering Gran Apache.

Faby's feud with her sister Mary Apache came to a head at TripleMania XVI, June 13, 2008, in Lucha de Apuestas Hair vs. Hair match.  In a very emotional match Faby defeated her sister Mary, however their father Gran Apache begged for Faby to shave his head in place of Mary ending the feud reuniting the family.

In her career to date Faby has competed in five Lucha de Apuestas matches, winning the hair of La Hechicera in 2002, May Flowers in 2003, & Mary in 2008.  She lost her hair to Sexy Star in 2009 and Lady Shani in 2018 at TripleMania XXVI in a very violent and bloody fight.

The AAA event Guerra de Titanes took place on December 6, 2008 in Orizaba, Mexico at Plaza de toros La Concordia.  At this event Faby and Gran Apache were defeated by Cynthia  Moreno and El Oriental when Faby was pinned by El Oriental.  Billy Boy came to the ring berating Faby who slapped him.  Billy Boy then turned on Faby body slamming her, stomping on her, and dragging her around by her hair before being chased off by Gran Apache.  This lead to Faby feuding with Billy Boy for the next few years.

Faby won her first AAA Reina de Reinas Championship on May 25, 2008 in a triple threat match tournament final defeating Mary Apache and Ayako Hamada to win the vacant title.  She would hold the title for 486 days losing it to Sexy Star in a "bull terrier" match.  A dog collar match where to win you have to tag all the turnbuckles.  Faby would hold the title a total of three times for 1,314 days, most recently for 310 days in 2018. 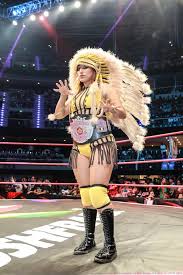 Her first match in the United States I can find is in 2007 at a AAA promoted event in Fort Worth, Texas.  In 2009 she wrestled in Las Vegas, Nevada, San Diego & Los Angeles, California.  July 11, 2015 she wrestled at the Royal Albert Hall in London, England at Lucha Future 2015.

In 2017 she along with her sister Mari and father Gran Apache they officially held the AAA World Trios Championships for 47 days.

2018 was a big year for Faby as she returned to Japan wrestling for Stardom, returned to the United States wrestling in New York City and Fort Worth, Texas.  She debuted for Impact Wrestling defeating Alisha Edwards but coming up short against Tessa Blanchard for the Knockouts Title and wrestled on a AAA promoted event in Bogota, Columbia. She was ranked number 58 in the 2018 Pro Wrestling Illustrated 100 Women Wrestlers.

2019 she returned to the United States first appearing at WrestleCon where I had the pleasure of meeting her.  A week later she wrestled in New York at an American Luchas event. She appeared on Impact Wrestling in August, and later in the month wrestled in the All Elite Wrestling Casino Battle Royal at All Out in Chicago, Illinois. 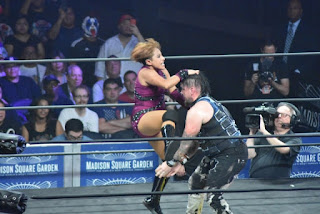 On September 15th she wrestled at the AAA promoted AAA Invading New York event at the Hulu Theater at Madison Square Garden.  She was ranked number 44 in the 2019 Pro Wrestling Illustrated 100 Women Wrestlers.

On June 15, 2019 in Houston, Texas Faby defeated Christi Jaynes to win the CTLL (Consejo Texano de Lucha Libre) Diva Texana Championship.  With this title win Faby has held championships in three different countries; Japan, Mexico, & the United States.  For a short time in 2009 she held the Reina de Reinas Championship and World Mixed Tag Team Championships simultaneously.  She did it again in 2013 - 2104 holding both titles for 274 days.

She has wrestled in the Main Event on several shows however in Japan she main event the world famous Korakuen Hall on two occasions:

Faby Apache is one of the best and toughest wrestlers in the world.  She has headlined Mexico and Japan and I think if she was given the opportunity here in the United States could have become one of the biggest stars.

There is an amazing documentary on YouTube called Lucha - More Than the Fight! that Faby is featured in along with Vampiro and El Hijo del Fantasma this is subtitled.  You can hear her thoughts on women in wrestling and about her feud with Mary. 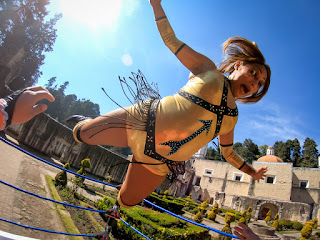 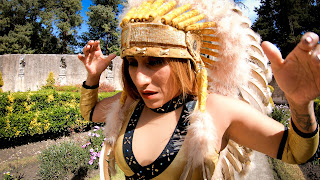 If you are not familiar with Faby then you should take the time to watch some of the matches I have linked below, you can find more matches of hers on YouTube and Vimeo as well.