Over the years many wrestling tag teams have changed their names from one promotion to another but very little else changes about them.  For instance Hawk & Animal were The Road Warriors around the world but were called the Legion of Doom in the WWE and The Dudley Boys were forced to change their name to Team 3D when they left the WWE.

There are other tag teams though that completely reinvent themselves when they move from one promotion to another if they chose to do so or not.  In this post we are going to take a look at one of those tag teams.

The duo began teaming together in 1989 in the AWA as the Destruction Crew wearing hard hats and carrying sledgehammers to the ring.  They would defeated Greg Gagne & Paul Diamond to capture the AWA World Tag Team Championships holding them for 314 days.  This would be the only championships the duo would hold.  Although they did win the 1989 PWI Rookie of the Year award, the only tag team to accomplish this. 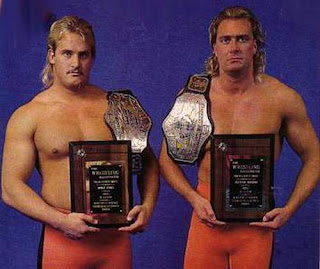 In 1990 while still the AWA Tag Team Champions they would travel to the WCW under masks as The Minnesota Wrecking Crew II with manager Ole Anderson.  Here they would challenge for both the NWA World Tag Team and United States Championships unable to capture either titles.  They returned to the AWA dropping the tag titles to The Trooper & DJ Peterson. 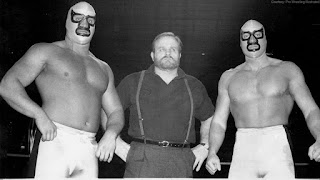 August 1990 to April 1991 they would tour New Japan Pro Wrestling as The Destruction Crew and wrestled what was the final AWA show on 1991 on May 3rd.  Three weeks later the debuted in the WWE as the bleached blonde tag team The Beverly Brothers Beau & Blake.

They would spend two years in the WWE where they challenged for the Tag Team Championships several times unsuccessfully.  After receiving an initial push in the promotion they were reduced to enhancement talent. 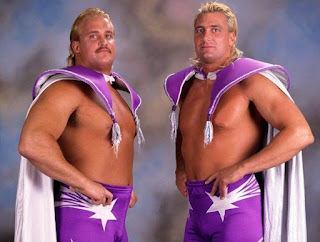 In 1994 & 1995 they would make a few appearances together on the Indies as The Destruction Crew.  In October 1997 in Minneapolis they wrestled on a dark match on WCW Nitro losing to Barry Darsow and John Nord. 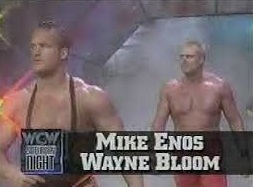 January of 1998 they made there WCW television debut on Saturday Night as Mike Enos and Wayne Bloom wrestling a half dozen matches over the next couple months until their final match as a team in April.  In total the teamed on and off together for nine years winning one tag team championship.