In this post but you can look at the cards that I got signed at Limitless Wrestling Flirtin' With Disaster on January 24th in Yarmouth, Maine.  Most of the cards are from Limitless Wrestling series 2 card set.  The cards were made by Todd Graham of Proving Ground Brand where you to can get your own custom trading cards made.  Following the link above of catch him on Facebook. 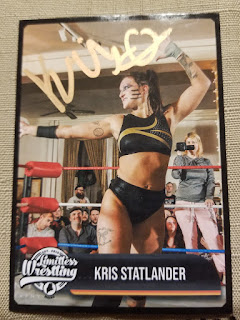 Kris Statlander was a surprise unannounced participant in the match.  I bought this pack of Limitless Series 2 cards after I say that she was there.  This card was in the front of the pack.  I was happy to get it signed, with her under contract with AEW I wasn't sure if she would be back with Limitless Wrestling.  I thought last month would be the last month, but she is advertised for February.  YEAH! 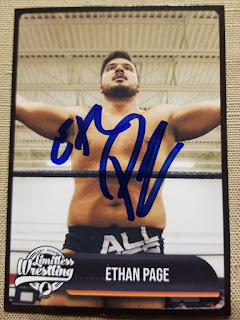 I bought a pack of Limitless cards at the show because this card was on the front of the pack.  I got two of the cards this night as there was one in the pack with the Kris Stat card.  I gave that one to Page and he was very excited to have it. 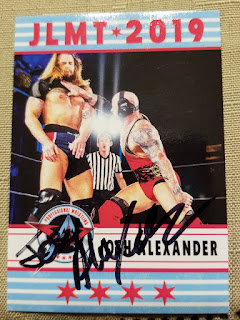 I bought this card from huskerhavs wrestling cards, it's part of the Jim Lyman Memorial Tournament card set.  These are great cards well designed, however, not a great picture as Josh Briggs is more visible than Josh Alexander is on it. 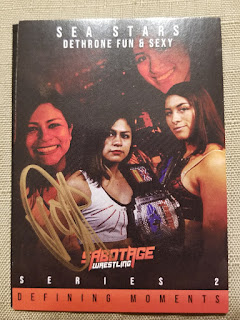 The last couple months Delmi Exo, Ashley's sister has been at the Limitless shows watching.  I bought this card from huskerhavs, it's part of the Sabotage Wrestling card set featuring the Sea Stars. The day before this show I read on Twitter that Delmi is on her way to Japan for a two month stint at the Stardom Dojo, great for her, but not for me as I now have to wait a few months to get her to sign this.

The first card I bought from Pillman for $5, the other two I had.  The middle card is from the Starrcast II card set and the third is from 4 Corners Cards. 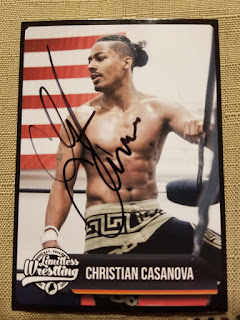 This card is also from the Limitless Wrestling Series 2 card set. 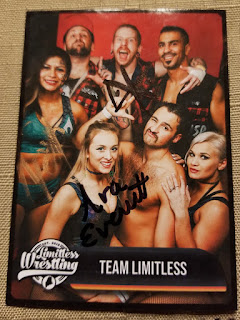 Until next time
Posted by Michael J. Labbe at 4:14 PM