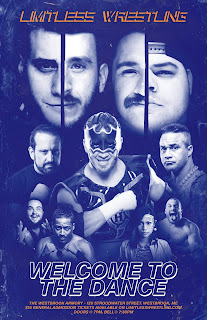 Alex rode down with me and we recorded for the podcast on the way down and back, that episode is posted now so go have a listen.  On the Road to Limitless Wrestling with Alex.  We met Mikey at Angelone's West in Westbrook before the show for some of the best pizza in Maine.  This is the last open location as the Portland one recently closed.  I wrote a blog about it a couple years back, I really love the pizza here.  Pizza By Angelone.

Doors opened promptly at 6:30pm for the VIP's which I was one because originally The Hurricane, Shane Helms was advertised but three days before the show the WWE pulled him, I had a couple cards that I wanted signed by Helms.  They made Dreamer the VIP, which I was cool with because I still didn't have a photo with Tommy Dreamer and I had him sign his other ECW trading card that I had.  These cards were released back with the ECW figures that the Original San Francisco Toymakers released.  They had two different Dreamer cards, I have the other one signed. 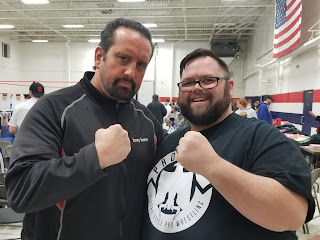 To say that this was a packed house is an understatement, I've never seen so many people crammed in this building.  The even removed the gimmick tables from the back and side of the venue for standing room, and it was a raucous crowd!  I'm so happy to be have a promotion in Maine that others from around the country look at and wish they had close to them like I used.

Other than my photo with Tommy Dreamer I also got one with Andy Williams & Pepper Parks: The Butcher and the Blade, and Brandon Kirk.  I also got a few cards signed and you'll see what in another post.

Sterling came to the ring with a referee demanding an opponent.  DL Hurst came out and got a big ovation for his return after being out so long with a leg injury.  It was good match, Hurst seemed to moving well.  He got the pin with a moonsault into a pin on a standing Sterling. 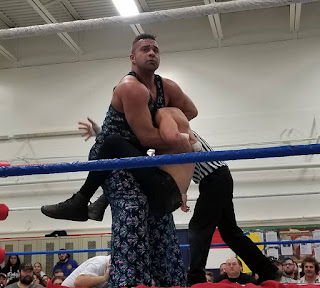 DAMN!  This was tremendous and lived up the the hype I built up in my mind.  Both of these guys are so good and both displayed there unique offense.  Allin took a beating this match but battled back several times, but in the end Teddy got the pin after on of is signature moves, a splash mountain into a sitout powerbomb but Darby did a full flip before landing.  Crazy! 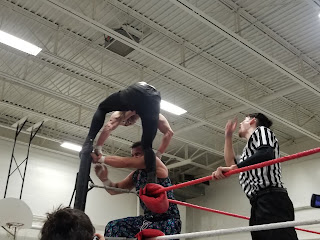 My first time seeing the Shook Crew and these guys were great. Another solid and entertaining match by MSP continuing their winning streak. I can't wait to see what trio they bring in to face MSP next. 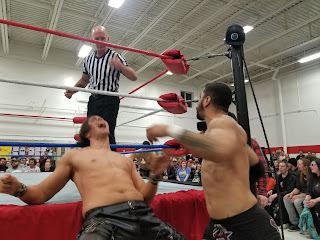 Casanova came out and cut a promo about Helms being afraid of him and how Stokley isn't here tonight because of his making fun his clothes.  Statlander then came out to accept Casanova's challenge to a good ovation. 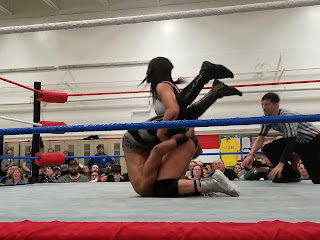 This was a great match, Casanova is very good and Statlander has been killing it for months now where ever she is.  It was good back and forth match and Kris got the pin after spiking Casanova on his neck and shoulders.  Look pretty vicious from my vantage point.

This was a fun match, some great comedy by Domino especially after a stink face from Angel.  Bunnies got the pin after some good double teaming.  Post match Domino attacked them throwing Angel to the floor and before he could do anything to Ava DL Hurst ran in with a crutch chasing Domino out. 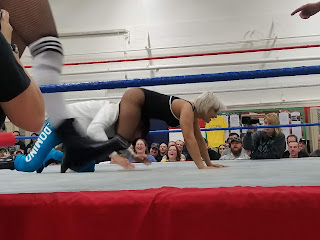 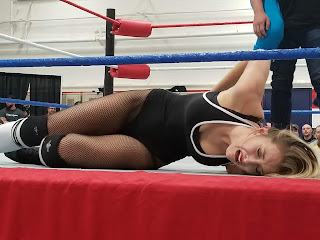 Hurst then turned on Ava and wrecked her with a crutch shot to the back, looked very painful.  He then cut a promo on the fans for forgetting about him and Anthony Greene.  Greene chased the reunited Hurst and Domino off.  I'm looking forward to Hurst vs. Greene in the future!

Match started out with some wrestling and respect being shown.  Then Dickinson kept goading Dreamer and calling him an old man.  The battled on the floor and all around the ring.  Dreamer got his hands on some spring time Oreo's and smashed them in Dickinson's face.  During another moment they exploded all over the ring and the guys wrestled on Oreo crumbs for the remainder of the match. 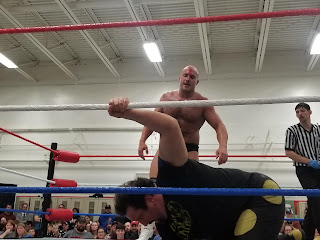 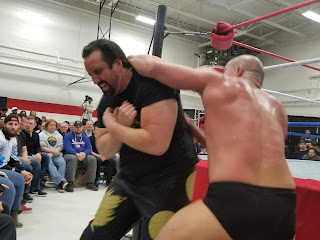 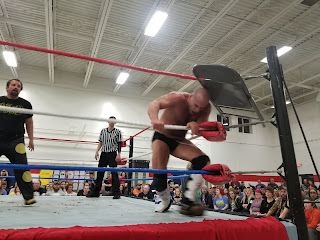 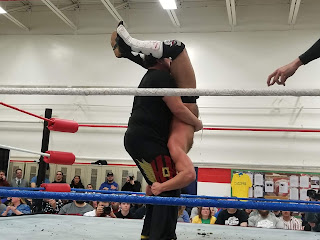 Dreamer brought a trash can out with a chair and kendo stick.  He wrecked Dickinson with can busting him open and then went to town on him with the kendo stick.  A table was set up in the corner of the ring.  Dreamer ate a drop-toe hold on the backrest of a chair, ugh, don't know why he still does that, looks wicked!

Eventually Dickinson ending up putting Dreamer through the table and getting the pin on the Hardcore Icon.  Post match Dickinson cut a promo celebrating Dreamer and wrestling.  Dreamer then praised Dickinson and us the wrestling fans. 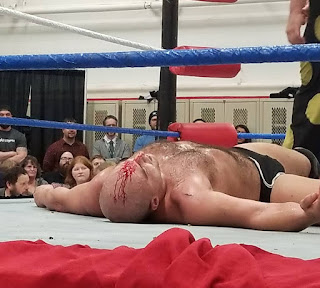 On a side note I have been a fan of Tommy Dreamer for over 20 years back to those ECW days, wrestling I watched live thanks to my buddy Jay's satellite dish.  Seeing  Dreamer come out to Man in the Box I got all emtional, I just can't help it sometimes. 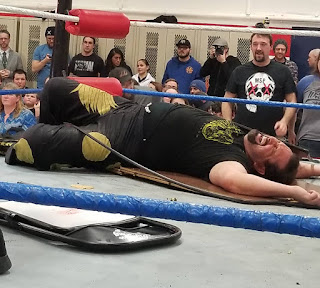 Killer match nice seeing some new guys like Something, Pat Buck, and Danhausen.  I'd like to see Danhausen back in a singles match up.  Antoine took a horrific beating from literally everyone in the match.  I felt bad for the guy. 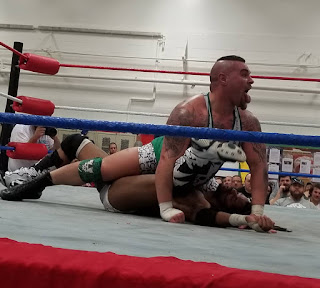 Something and Briggs squared off a few times and that's one match that I do want to see live in a Limitless ring. 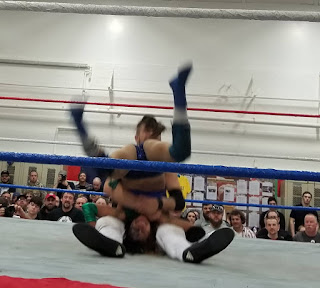 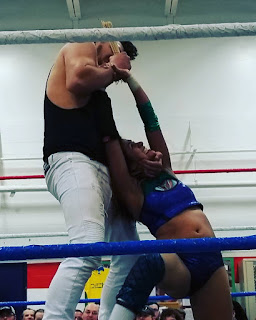 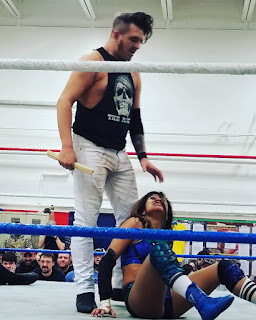 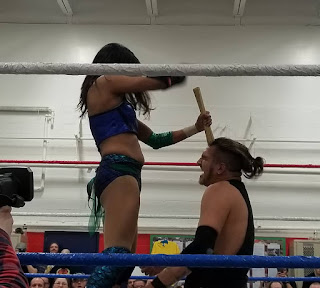 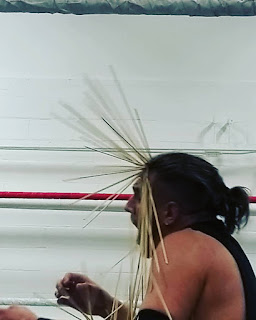 I really liked this match and Vox took a wicked beating through out, in the end though she prevailed getting another big win.  At one point Kirk attempted to drive skewers into Vox's head but she reversed it on Kirk.

It was great seeing Williams and Parks live, my first time for the both.  Williams looks like a jacked up Dr. Mindbender, not sure if it is intentional but it is awesome!  Once again the Thick Boys had an illegal double pin on Parks. 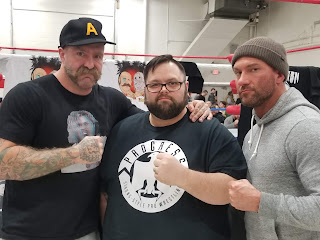 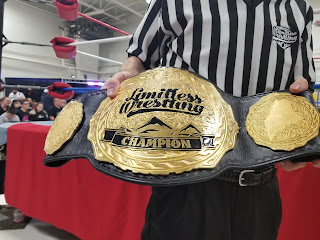 Damn great match!  These four guys didn't showed why the deserved to be in the main event fighting for this title.  For the beginning of the match it was primarily The Kings staying together, until Dunn hit Death by Elbow and MJF threw Dunn to the floor to steal the pin. 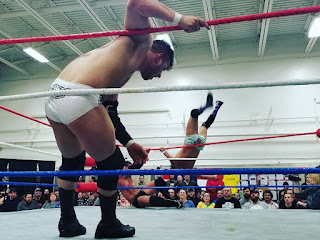 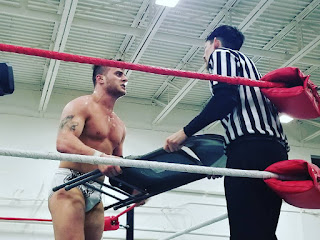 The match went to the floor and around the ring.  They went through the crowd to the lockers, this time Greene and Dunn climbed on top, with Greene falling off and then Dunn jumping on everyone.

Back in the ring the finish came when Dunn hit everyone with Death by Elbow, the last being MJF which caused Dunn to fall out of the ring and MJF to fall back on top of Greene for the three count. 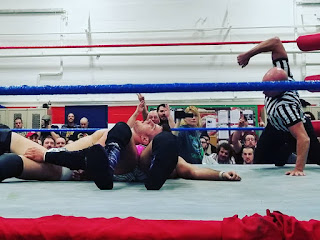 There was a huge pop when MJF won the championship, I think part excitement and part disbelief.  I myself was rooting for Anthony Greene to pick up the win.  In my opinion he has been the true ace of Limitless Wrestling over the years.  Post match Ashley Vox came out challenging MJF who accepted, I'm guessing for the next show. 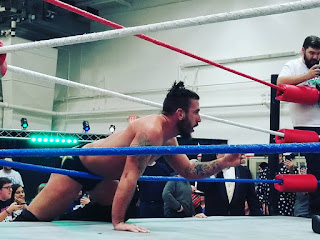 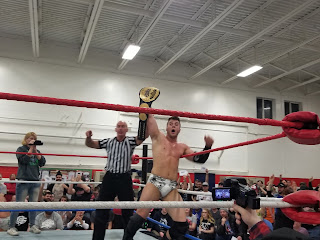 Limitless Wrestling returns to Westbrook on Friday, May 11th, featuring the return of "All Ego" Ethan Page.  Tickets on sale Monday March 18th at 7pm. 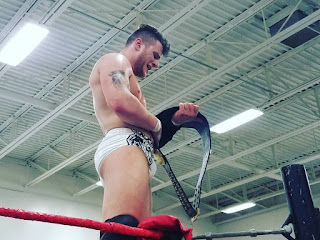 Later Readers!
Posted by Michael J. Labbe at 5:18 AM