Back when Goldberg debuted I initially bought into the hype, but then I became disenfranchised with him including is first run in the WWE.  He second run in the WWE I could care less about as well.  That being said he possible the only wrestler whose career lasted longer than a minute where you can count the number of loses he suffered, here they are.

This first set of matches are where Goldberg was directly involved in the finish.

Anyone my age remembers this for the screw job finish that it was.  Fist Discro runs in and gets destroyed, the Bam Bam Bigelow runs in and is tossed out by Goldberg and while the referee and security tend to Bigelow Scott Hall returns dressed as security and hits Goldberg with a cattle prod leading to the jackknife powerbomb and pin. 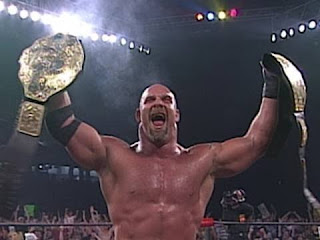 The last segment before this match had Hall & Nash in the ring cutting a promo where Goldberg ran out and speared both men.

This match was okay.  Hart had a hairline fracture in his leg and Goldberg worked the leg the majority of the match asking the referee to stop it.  Hart jumped on Goldberg's back with a sleeper hold and has Mikey J was checking for a choke Goldberg slipped Hart off onto him bumping the referee.  Goldberg then clotheslined Hart to the floor.

Hall, Nash, & Sid ran in, after taking out Hall and Nash Golberg was caught by a big boot from Sid.  He then was chokeslammed by Hall, side suplexed by Nash, and powerbombed by Sid.  They all left the ring, Hart slid back in pinning Goldberg, who kicked out just after three.

Hall & Nash interfere causing the ref to signal for a disqualification.  Hart asks to re-start the match.  The referee does.  Hall, Nash, & Jarrett interfere, Bret doesn't see it and pins Goldberg after. Taken from a report on DDT Digest.

I would wager there was a referee bump and Hart was on the floor during the beat down much like their match on October 25th. 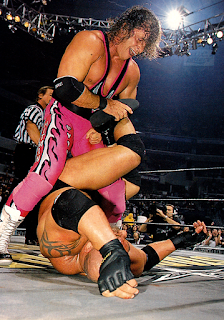 The ref gets bumped and Roddy Piper comes out.  He gets in the ring just has Hart applies the sharpshooter and immediately calls for the bell, ala the Montreal Screw Job.  Piper then takes the title and walks towards the back, Hart catches up at the entrance way where Piper hands him the belt.

This was the match where Hart was concussed by a Goldberg kick that essentially would end Hart's in ring career.

The ref is bumped, Bret Hart locks Goldberg in a figure four.  Hall and Nash run in with baseball bats and attack Goldberg.  Hart breaks the hold and takes his licks with the baseball bat.  Roddy Piper runs in and attacks Hart who is pinning Goldberg, the ref counts 1, Hart is pushed off Goldberg by Piper, the referee counts two and three then awards the title to Hart, who wasn't pinning Goldberg.  Jeff Jarrett runs out and hits Piper with a guitar.

Nash, Hall, Hart, and Jarrett declare themselves the nWo.  Incidentally Hart was the World Champ, Jarrett the US Champ, and Hall & Nash Tag Team Champs.

This match last only a couple of minutes.  Booker T attacked Goldberg in the aisle during his entrance.  In the ring Goldberg got the best of Booker T until Jeff Jarrett ran in hitting Goldberg with a chair, who no sold it and speared Jarrett.

Ernest "The Cat" Miller ran hitting Goldberg with a spin kick, Booker T hit and axe kick and the Book End for the three count.  Goldberg kicked out on three then speared and jackhammered Booker.

Goldberg had Steiner in position for a Jackhammer when Vince Russo ran in and hit Goldberg with a bat three times.  The action when to the floor where Steiner bodyslammed Goldberg through the table.  The match continued with Goldberg powering out a Steiner Recliner.

Goldberg was sitting on the top rope when Midajah hit Goldberg with a lead pipe and Russo it him with the baseball bat.  Goldberg then powered out of another Steiner Recliner.  Russo attempted to attack Goldberg with the bat but it was blocked.  Steiner then his Goldberg in the midsection and head with the lead pipe.

Steiner applied his finisher for the third time but Goldberg was unconscious so the referee called for the bell. 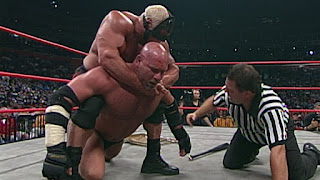 A fan from the audience sprays mace in Goldberg's face then Luger unloads on Goldberg with a chair outside and then inside the ring.  Luger then lifted Goldberg up on his shoulders for the worst blockbuster ever before pinning him.  There was an additional stipulation that if Goldberg lost he would be forced to retire from wrestling.

According to the report in the Pro Wrestling Torch newsletter this match featured a couple ref bumps and Randy Orton and Ric Flair interfered before Triple H got the pin with the pedigree.

Goldberg eliminated Orton, Michaels, and Jericho by pinfall.  Triple H pinned Goldberg after hitting him in the back of the head with a sledgehammer avoiding a spear. 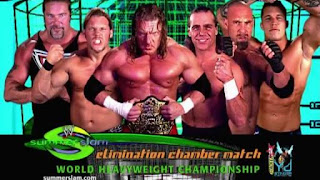 Triple H pinned Goldberg after Kane chokeslammed him.  Randy Orton, Ric Flair, and Batista all interfered in the match. 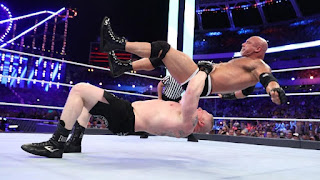 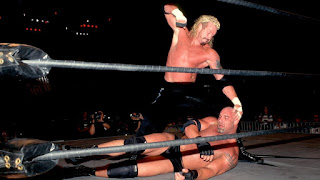 In his career Goldberg was only directly involved in the loss of a match 14 times.  Of those only twice was it a clean finish in a straight up one-on-one match with no special stipulations or outside interference.  June 24, 1997 in a dark match to Chad Fortune before his Television debut and his, presumably, final match when Lesnar beat him at WrestleMania 33.

Like him or not I doubt anyone else in the career can say the same thing.