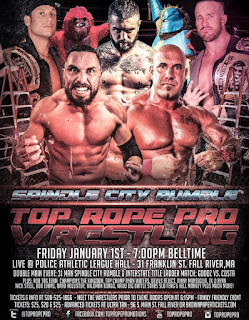 Here are the results from the Top Rope Promotions Spindle City Rumble on January 1st:

The show started with an in ring segment. TRP Champion Ryan Waters and his buddies Brad Hollister and TK O'Ryan come out and celebrate Waters being champion and the new year. Vinny Marseglia comes out and says that hes pissed because hes injured and can't compete tonight. Then Waters, Hollister and O'Ryan corner him which brings out Nick Steel. Steel says that hes not friends with Vinny but hes not gonna let him get jumped. Steel then challenged Waters and his buds to a fight. Waters acted like he wanted to fight as well. This brought out Guy Alexander, I think he is the authority figure. Guy said that since Waters had screwed so many people out of the title and since he wanted to fight, he was gonna put the title on the line against 30 other men. Guy made the Spindle City Rumble for the title. He also said that Waters had to be #1. Waters was so pissed he almost cried.

Match 1: Mike Bennett and Bob Evans w/Matt Taven defeated The Alden Brothers (Eric and Shane). Taven was supposed to team with Bennett but he injured his knee. The Aldens came out to absolutely no crowd response. You could have heard a pin drop. It was similar to the reaction the Bomb got when he fought Vader in South Paris. This was my first time seeing Eric Alden. He does a similar character to Raven in TNA. He wasn't bad. The match was kinda average. Nothing really special.
5.5/10

Match 2: Slo Feng defeated Hell Monkey. This was a Kaiju Big Battle Showcase Match. It was the most ridiculous thing I have ever seen.
0/10

Match 3: Teddy Goodz defeated Interstate Champion Craig Costa w/Marshall McNeil in a Ladder Match to win the title. This was a pretty good match with a bunch of typical ladder spots. Near the end of the match Teddy almost had the belt and some tiny tattooed guy came out and tried stopping him. This brought out Brandon Webb, who attacked the tiny guy. This then brought out Kongo who attacked Webb. Then all 3 guys battled to the back. During all of this Costa made his way up the ladder and almost had the belt but Teddy climbed up a second ladder and tried to stop him. McNeil tried to toss a fireman's helmet to Costa but Teddy intercepted it and hit Costa with it. Then Teddy hit an Ace Crusher off the ladder. He then climbed up and got the belt. The crowd went nuts. Teddy is super over. I've never heard an indy crowd that loud before.
7.5/10

Match 4: TRP Champion Ryan Waters won the 2016 31 man Spindle City Rumble last eliminating Nick Steel to retain. Entrants came out every 90 seconds. This was a great match going about 90 minutes. After the final entrant came out at the 45 minute mark, there were about a dozen guys left and the match went about another 45 minutes. There were many great wrestlers in the match including: Ryan Waters, Chuck O'Neil, Brad Hollister, TK O'Ryan, Mike Bennett, Bob Evans, Anthony Greene, Brandon Webb. There were also some really dumpy guys too. Some awesome spots in this match. Nick Steel is stiff as fuck. He was legit headbutting people all over the place. He hooked up with Chuck O'Neil 3 or 4 times and they beat the ever loving shit out of each other. Some jobber guy came out and said that he was an entrant. He took about 4 entrants to get his gear on up on the stage. When he finally entered Nick Steel headbutted the shit out of him then threw him out but landed extremely hard on the ring steps spine first. Brandon Webb and Kongo beat the hell out of each other many times during this match. Some midget dressed like Stone Cold came out to Stone Cold's music and did stunners to everyone in the ring. Then Nick Steel threw him out. Speaking of Nick Steel his was super blown up but I give him credit for continuing. The final entrant was Marshall McNeil. He was wearing a Bobby Heenan style singlet with one boob showing. I no more than said that he had his tit flopping out and Brandon Webb gave him a massive titty twister and threw him out by his boob. The final 5 was Ryan Waters, Brad Hollister, TK O'Ryan and Mike Bennett. Since Steel was so blown up and couldn't do anything, Waters, Hollister and O'Ryan teamed up on Bennett. It took them awhile to finally get him out but they did. Just as they were all going to triple team Steel, Vinny Marseglia came out. This distracted them enough for Steel to eliminated Hollister and O'Ryan. Waters then beat on Steel some but was distracted by Vinny. Waters said something derogatory to Vinny which really pissed him off. He then tried to get into the ring to attack Waters. This distracted the referees. Steel then got up and threw out Waters, who was paying attention to Vinny, on the opposite side. Since the referees didn't see it, Hollister and O'Ryan who were still at ringside, threw Waters back in. Steel was now distracted by Vinny who was still pissed and distracting the referees. Waters then threw out Steel on the side where the refs were and won the match. Steel then got really pissed at Vinny for costing him the match. Waters then celebrated with Hollister and O'Ryan.
10/10

Overall this was a great show. The rumble was excellent. The PAL Hall is a great venue for wrestling and we had excellent seats. If you ever go to a show here get balcony seats you won't be disappointed. I would defiantly go to another show there. I like that their roster is completely different from the other New England feds I have seen. This allowed for me to see a bunch of guys I had never seen before.
Posted by Michael J. Labbe at 2:32 PM