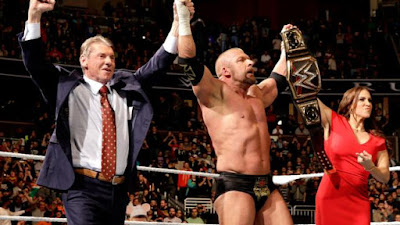 The 2016 Royal Rumble is over and I didn't do too good on my predictions.

Darren Young & Damien Sandow vs The Dudley Boys: Bubba Ray & D-Von vs. The Ascension: Konnor & Victor vs. Mark Henry & Jack Swagger
Really surprised at Mark Henry & Swagger winning, I didn't think they would have any affect on the outcome and they didn't, both eliminated in about a minute.

Tag Team Champions: The New Day: Kofi Kingston & Big E w/ Xavier Woods vs. The Usos: Jimmy & Jey
I got this one right and I really enjoyed this tag match.  Usos are really good as a team and I really liked the finishing sequence.

United States Champion: Alberto Del Rio vs. Kalisto
Once again I was wrong as Kalisto captured the United States Championship for the second time in as many weeks in a really good match with Del Rio.  It'll be interesting to see where they go with Kalisto as champion, long term or transition.

Intercontinental Championship Last Man Standing: Champion Dean Ambrose vs. Kevin Owens
Once again I was wrong about the outcome as Dean Ambrose walked out the Intercontinental Champion.  This was the match of the night for me, solid from top to bottom and the finish was fantastic.  These guys really beat the tar out of each other,  One of my favorite moments was when Owens was knocked over the announce table and he crashed into Michael Cole and kept pushing on his face, hilarious!

Diva's Champion: Charlotte w/ "Nature Boy" Ric Flair vs. Becky Lynch
I was right about this one! Becky came out looking so strong and Charlotte like the chicken shit heel who just barely kept her title.  Of course the post match attack by Sasha Banks starts their feud towards Mania sadly leaving Becky in the background.

Royal Rumble Match for the WWE World Heavyweight Championship
I figured that Triple H would be in this match and cost Reigns the title, didn't think Trips would walk out as Champion.  I was very excited to see AJ Styles debut in the match, we didn't see anything from him to speak of.  He did get a couple eliminations and based on Kevin Owens eliminating him that'll be his first feud.  He got a huge pop and the 28 minutes he was in there several "AJ Styles" chants broke out. 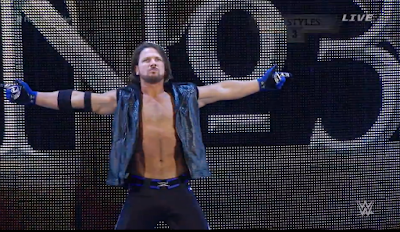 The most exciting time of the Rumble match was the near 5 minutes that Kevin Owens was in it.  He got a  big pop, his initial flurry with AJ before the tossed out Styles and mocked him, then his flurry with Ambrose, then with Sami Zayn until Zayn threw Owens out. After Zayn was eliminated the crowd seemed to die down. Until it came down to Triple H & Ambrose.

Going towards WrestleMania we have Triple H vs. Reigns, Brock vs. The Wyatts, and Kevin Owens vs. Zayn or Styles or Ambrose again.

It was very good show with some great matches.  I know many will be pissed with the Rumble match but it was what it was.  The ending wasn't my favorite either, not my pick to win, but it could have been worse I reckon.