Stan “The Man” Stasiak was a journeymen wrestler competing for 26 years from 1958 to 1984.  He held numerous regional championships in the United States and his native Canada, however he only held a recognized world championship a single time for nine days in 1973.  A transition champion he defeated the great Pedro Morales in and lost the title to the legendary Bruno Sammartino. 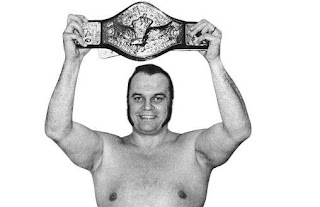 To my knowledge he only held defended the championship one time before dropping the strap to Bruno.  The only footage I’m aware of Stasiak as champion is his title loss to Bruno which you can find on YouTube.

December 1, 1973 Philadelphia, Pennsylvania
Stan Stasiak pinned WWWF World Champion: Pedro Morales to win the title at 17:42 when all four men's shoulders were down following a back suplex from the champion; after the bout, Stasiak was not announced as the new champion for fear of a riot - rather the ring announcer simply said "Let's hear it for a great champion, Pedro Morales"; the title change was announced the following Saturday on television; Barney Solomon was the referee for the bout

December 10, 1973 Madison Square Garden
Bruno Sammartino with Arnold Skaaland pinned WWWF World Champion: Stan Stasiak with The Grand Wizard at 12:35 to win the title after three consecutive bodyslams
Although his title run is little more than a footnote between Morales and Sammartino, he was champion at a time when all fans knew it meant something to be champion.  It gave him immediate credibility for all of this matches in the future.  He was the fifth man to hold the title, and was trusted by Vince McMahon Sr. to be that transition champion.
A special thank you to The History of WWE for the results in this post.
Thank you for reading, please leave a comment, check out my other posts, and if you want like my blogs Facebook page.  You can also head over to Amazon and pick up a copy of my new book Limitless Wrestling: The First Five Years, or any of my other books as well.