It's finally here, Wrestle Kingdom 13 from the Tokyo Dome live at 2 am eastern.  Instead of the New Japan Rumble, the opening is a six man tag gauntlet match to be declared the number 1 contenders for the Never Openweight Six Man Tag team championships, that match to take place at New Years Dash on January 5th.

My buddy Bradford chimed in some thoughts that I thought I would share, they are italicized.

For this match they used the side entrance and not the main entrance.

Chase was holding Finlay and was struck by Page after Finlay moved.  Yujiro pushed Page, Page pushed him back and Yujiro was rolled up for the three count by Finaly.  Post match Chase and Yujiro has words with Page and they walked out leaving Page and Scrull in the ring.  Chase and Yujiro have kind of been lost in the shuffle with them apparently leaving Bullet Club but never officially joining Elite.

Fast match with Suzuki Gun jump starting the bell but not all over the floor.  KES pinned Finlay after the Killer Bomb.

Suzuki Gun jumped them in the aisle on the ay to the ring.  But it quickly went back into the ring.  Another really good match, lots of fast paced action.  Finish came when Yano low blowed Smith and pinned him with a school boy.  Suzuki beat up some young boys after the match with a chair.

This means that tomorrow Taguchi, Makabe, & Toru Yano will challenge for the titles.  This was a good match but I like the New Japan Rumble better. 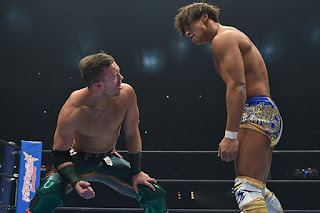 Really good match!  Lots of fast paced action with multiple reversals.  A couple very cool moments, Ibushi is tied up in the tree of woe and Osprey just sits on the mat in front of him and slaps him in the face.  Then when reversing a top rope move he hits his face on the ring post and apparently breaks his nose.  Osprey wins the title with stormbreaker.  Decent but honestly not as good as I though it would be.  They didn't do as much high flying as I thought they would.  Good finishing sequence though.  Ibushi did a stretcher job, which is unusual for New Japan.  Ibushi was champion for 26 days.

Bradford: Ospreay / Ibushi focused on strikes and speed instead of flying because f'ing Walter injured Ospreay, meaning he had to alter the way he wrestles. 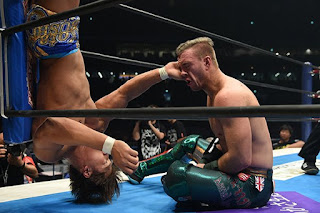 Apparently this is a tornado style one fall to a finish match, however, there can only be two legal competitors at a time?!?  Ok that's odd.  Very good match lots of action, once Shingo tagged in be pretty much dominated.  Takagi pinned Sho with last of the dragon for LIJ to capture the Junior Tag Titles.  Kanemaru and El Desperado were champs for a long 304 days. 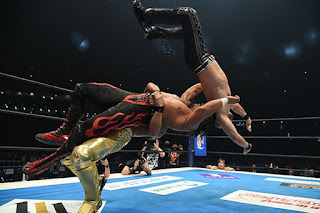 I don't understand how they think Shingo is a believable junior, he's clearly not. 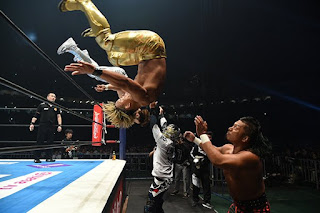 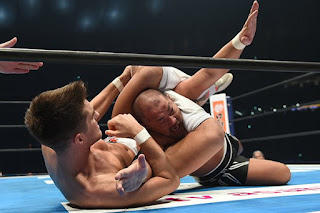 What's cool about this is the winner gets a new belt and the old one is retired and they have a RevPro referee Chris Roberts to officiate.  I really enjoy these little extras.

These two went right at it when the bell rang a Zack said he was going to submit him in 60 seconds.  He didn't succeed but he really worked over his arms in that way that Sabre can do.  Sabre goes from an attempted Arm bar into an ankle lock!  That finish with Zabre tying up both of his arms and kicking him in the head....just damn!  He calls it: "Hurray! Another year, surely this one will be better than the last; the inexorable march of progress will lead us all to happiness." Ishii was champion for 82 days. 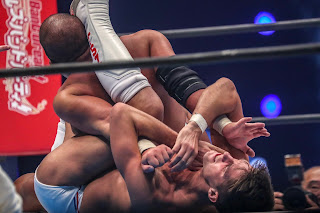 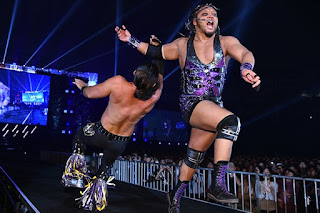 Starts with Matt and Tama in the ring, Evil tagged in when Tama was doing his I'm a good guy shake my hand bit.  Evil then bodyslammed and hit a long distance running clothesline on Matt and his sold the back that he injured last year at Wrestle Kingdom.  Tama Tonga is apparently trying to be a good guy, based on his promo at Fanfest on the 3rd. 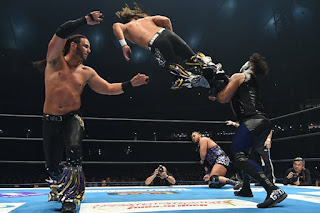 A lot of crazy super fast offense with frequent tags.  We got a tower of doom and then Nick, who was not involved hit a 450 splash on Sanada.  Finishing sequence was cool with multiple finishers hit until Sanada hit the moonsault on Matt Jackson for the pin.  I wonder if this is the last we'll see of the Young Bucks in NJPW, well maybe tomorrow too.  GOD held the titles for 96 days. 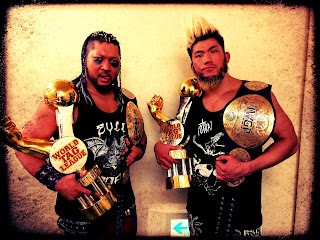 This match was just okay.  A alot of the typical Cody shenanigans until Brandi was kicked out.  Match wasn't very long, Juice pretty much dominated and got the pin after two pulp frictions.  Again makes me wonder if this is the last we'll see of Cody in NJPW.  Cody held the title for 96 days and this was his first defense. 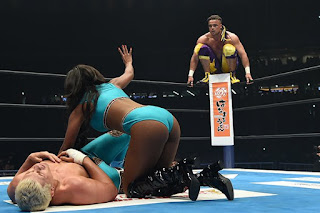 Bradford: Juice is the first two time IWGP US Champion which would be cool if the title wasn't meaningless already. 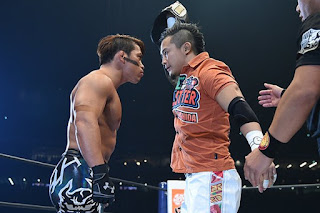 Excellent match!  Great combination of high flying and mat wrestling.  Ishimori does a lot of guys landing on his knees moves like the lung blower.  This maybe the match of the night so far.  Kushida held the title for 88 days. 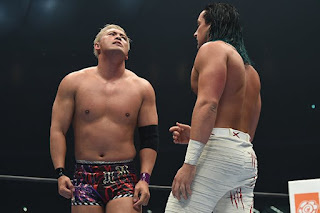 We get the full Rainmaker entrance with his elaborate jacket and money raining in the dome and he's back to the short trunks from the pants.  Terrific match!  This really shows how good Okada is and how good Jay White is going to be.  Unbelievable finishing sequence that I could do no justice to describe.  Reversal after reversal, Okada hitting his dropkick and a partial rainmaker.  Then going for it again and Jay White reversing it into blade runner for the pin.  Fantastic! 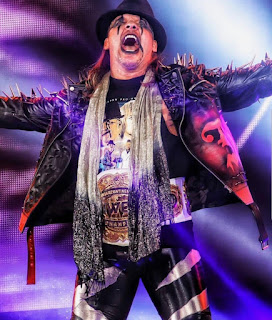 Naito attacked Jericho from behind knocking him to the floor.  Naito hit a stiff and sick looking piledriver on the ramp entrance.  That looked frigging stiff.  Later Naito went for a dive through the ropes and Jericho hit him in the face with a kendo stick.  Taking to the floor they stood on the announcers table and Jericho DDT'd Naito who was stood straight up on the top of his head and you could hear the table break. 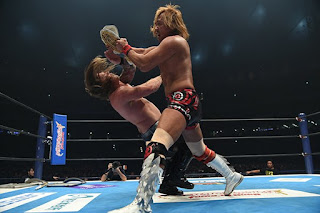 The action in the ring back intense, Jericho dominated for a spell and then Naito took over.  Jericho using his patented moves like the lionsault and walls of Jericho.  Naito using his signature moves just a great match!  Probably Jerichos best in New Japan on this run.  Naito kicked out of the codebreaker! Jericho brought 8 chairs in the ring and went for a powerbomb, but Naito reversed it into and DDT, then hit a codebreaker of his own for a two count.  Jericho kicked out of Destino, then hit a low blow on Naito, went to stinger splash Naito but ate the turnbuckless corner steel.  Naito hit Jericho with the belt and a second Destino for the pin.  Jericho assaulted a young boy on the way out.  Jericho held the title for 201 days with 1 defense.  I know it's his gimmick but I hate how Naito treats the championships. 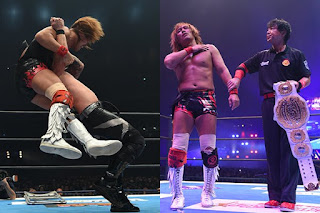 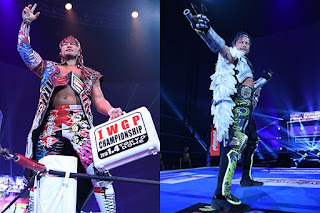 Every title has changed hands tonight which makes me think that this one won't.  Kenny 's entrance great is pretty awesome! Omega is being seconded by The Young Bucks, perhaps for the last time.

This was a Kenny Omega match, it started slow and built to a tremendous crescendo when in almost 40 minutes Tanahashi hit the hi fly low for the three count and claim his 8th IWGP championship.  Omega was champion for 209 days with three defenses.  I did watch this whole match but was unable to take notes while watching it.  There were many great moments with both men taking punishment that had lasting effect on them during the match.  Tanahashi went for a hi fly low with Omega on a table on the floor and missed crashing through the table, it was a rough looking landing.  Omega showed a lot of cockiness during the match at times when he was in control.  The finishing sequence was excellent. 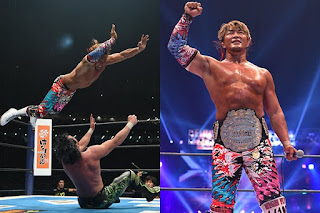 All in all I thought it was a very good show from beginning to end.  Surprisingly all the titles changed hands and we may have seen the last of Cody, Young Bucks, & Hangman Page at this show.  I was hoping that Omega would retain, I can't see him leaving New Japan except for saw AEW or the indies.  He's a wrestler that needs to a blank canvas to do his art and I don't see him getting that type of freedom in the WWE.

Some news that came out of Wrestle Kingdom are new shows announced for the year including two additional shows in the States.  February 2nd in Nashville adding to the shows in California and North Carolina the two days prior.  July 6th the GI kicks off in Dallas, Texas as the same arena that AXS tv owner Mark Cuban's Dallas Mavericks are based out of.

Also they are pushing The MSG show like it is their show and not a join ROH show which is odd as most of the time when New Japan talents works War of the Worlds or Global Wars they don't advertise them as New Japan shows, in fact New Japan doesn't list them on their schedule at all.

Bradford:
All members of LIJ hold titles now, whereas Elite was swept, and Bullet Club up two big wins for Taiji and Jay White.  White will be the next big gaijin with Kenny probably leaving soon. 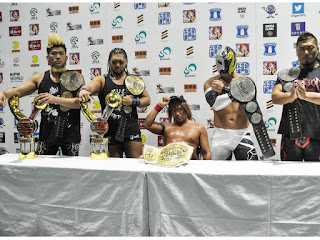 Somthing else I thought was interesting is that they mentioned Nakamura an unhealthy amount.  Sometimes they were reaching just to mention him.  Part of me wonders if he's coming home sometime soon.