These sixteen cards I got signed at the Limitless Wrestling "No Control" event that took place on November 30, 2018 at the Portland Club.  You can read my report about it here.  Normally I don't post this many cards at once, but most of these cards are Limitless Wrestling cards so it made sense to group them together. 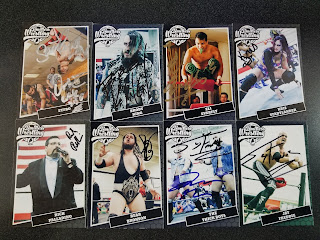 This first bunch starts out with LAX formerly the EYFBO and is signed by both Santana and Oritz, Brody King, Eli Everfly, Kris Statlander, Rich Palladino, Bear Bronson, Thick Boys, and Jay Freddie.  I had gotten the Thick Boys card signed by John Silver in September.  Also Rich Palladino was the ring announcer at the first ever indy show I attended back in 1997. 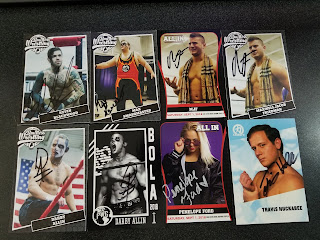