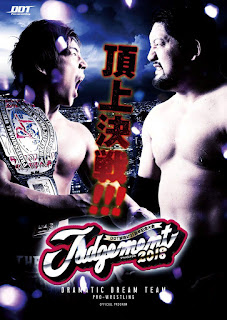 I was pleasantly surprised when I discovered a couple hours before bell time that DDT Pro Wrestling was live streaming their 21st Anniversary show for free on their DDT Universe streaming service.  I lost my shit when during the match announcements I was reminded that The Great Muta was wrestling his final match on the show.  He had previously wrestled his final match as Keiji Mutoh on Wrestle-1's March 14th.  He is having double knee replacement surgery at the end of the month that will most likely end his in ring career.

I have never watched and entire DDT Pro show before and I can not claim to be familiar with any of the current storylines or even who their main Japanese talents are.  They are known as a promotion that heavily features comedic elements in most all matches, however their roster has featured some of the most athletically gifted wrestlers including Kota Ibushi and Kenny Omega.

Some of their most well known viral clips including:

This is where Joey Ryan first flipped someone with his dick

Kota Ibushi has had so many unique and unbelievable matches in DDT Pro, feuding with Yoshihiko, wrestling a matches in the woods or on the street, and just plain bizarre stuff

Lets get to the matches! 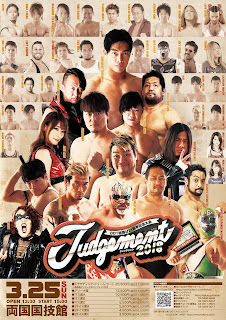 This match was tornado style with two teams starting and the next team joining once one was eliminated.  Elimination was by pinfall, submission, or throwing one of your opponents over the top rope and both feet touching the floor. The only person I was familiar with in the match was Ethan Page.  One team was a girl and guy, Reika Saiki & Lady Beard, both dressed as J-Pop singers and they did a song and dance number before entering the ring that was actually pretty entertaining and catchy.
The match itself varied from over the top comedy at the beginning to serious wrestling at the end.  Nothing really stood out to me in the match and I'd rate it as fair.  Toru Owashi & Kazuki Hirata last eliminated LiLiCo & Makoto Oishi when Hirata pinned LiLiCo

The premise of this match was Joey trying to get Colt to grab his dick or forcing blow pops in Colt's mouth.  In the end Colt forced Joey to grab his own dick with his left hand and using his right forced Joey to flip himself leading to the Billy Goat's Curse submission.

The stream cut out at the beginning of the match so I only got to see the last few minutes.  From what I saw although there was some comedic elements that match was more akin to the hard hitting joshi style match where these girls let it all hang out and beat the crap out of each other.  What I saw was excellent.  Saki-sama pinned Mizuki

Super Sasadango Machine gave some sort of power point presentation after is introduction that went several minutes that I think outlines his plan for winning his match tonight which included a comically large iron leg trap and handing out fans to the crowd that featured his opponent so when he walked over to their section he would get caught in the trap.

When Jiro came out he spent several minutes dancing around the building narrowly missing the giant trap twice and then landing directly on it when he made his rolling dive into the ring.  After a few minutes of action Jiro had Sasadango pinned and after a count of two music kicked on and everyone seemed to freeze, then the lights dimmed and a video came on the big screen.  I have no friggin clue what is going on.  They then wrestled in slow motion while the music and video continued.  Jiro cut an impassioned promo while someone placed a large golden trap on Sasadango's prone body, the music cut out, Jiro moonsaulted onto the trap and was then promptly pinned with a school boy for Sasadango to retain.  Yup

Chinsuke dresses like, has his hair cut like, and acts like Shinsuke Nakamura complete with violin styled music that a black guy came out pretending to play a violin during his entrance.  So the match starts and we got a 8 man head scissors with a 9th guy putting the first guy in a boston crab that forced everyone to roll over.  We got an eight man overhead suplex.  In between the comedy spots we did get some good high flying wrestling.  The finish came when Mike Bailey dropped the double knees on Michael Nakazawa and MAO landed a 450 splash for the pin.  Nakazawa was supposed to take the Anal Blast but ran to the back.

Then I think everyone and the referee played some elaborate game of not it.  The last guy, Sanshiro Takagi then "took one for the team" I guess, he removed his boots, knee pads, and trunks as he walked down the walkway laying down with his ass exposed near the entrance while a knock off instrumental version of "we can be heroes" played.  At the last moment he couldn't do it, so Munenori Sawa laid on top of him with his ass exposed and lacing their fingers together then pressed the red button setting off an explosion that apparently anal blasted them.

Every minute a new weapon or competitors come to the ring.

Competitors: Cross dressed trio, a trio of monks that brought a dead wrestler back to life, two guys in black body suits with plastic bats that hit everyone in the ass, a guy on a pedal bike that rode around the ring clotheslining people, another guy in a black body suit with a plastic bat and he took struck everyone in the ass because they lined up for him.  Each of these people would leave right after they did their gimmick.

The big take away for me in this match was that Speed Ball and MAO are a great tag team and I would like to see them in some serious matches.

I marked out big time for Muta's entrance and his awesome costume.  Muta always moved oddly in the ring, but you could tell that his knees are giving him trouble.  Whenever Danshoku Dino was in the ring it was all sexual comedy spots, that's his gimmick, but when he wasn't it was a very good match.  We saw green and red mist in this match.  The finish came when Muta gave Ishii his patented fast backbreaker and landed one last moonsault for the three count.

At fifty five I truly believe that this will be his final match and I'm ecstatic that I got to see it.  When he was walking to the back with the classic Muta music playing I couldn't help but get a little emotional.

Work interfered with me paying close attention to this match.  From what I saw it was a strong style heavy striking tag team affair .  From what I could gather the story was watch how hard we can hit each other and he who hits the hardest wins.  I enjoyed the match though.

At 42 Ishikawa is a serious contender even though he is 20 years older than the champion Takeshita. He is a four time KO-D Openweight champion, former AJPW Triple Crown Champion, and his back shows the scars from his wars in Big Japan.

This was an excellent match, hard hitting, good story of the veteran putting over the younger guy but making him work hard for it.  Takeshita got the pin with a straight jacket german suplex.

Match of the night for me is a toss up between the The Six Man Tag and Takeshita vs. Ishikawa.

Michelle @puroresueikaiwa on twitter resides in Japan and graciously allowed me to use some of the photos she took at the event.  You can see more photos including a video of Great Muta's final moonsault on her twitter and be sure to check out her blog as well it is in both Japanese and English - http://ameblo.jp/catbearmouse

Again this is my first complete DDT Pro show and even though I was completely confused a couple times I must say overall I was thoroughly entertained.