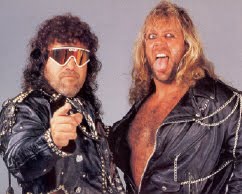 Recently while researching my blog post One Day Champions I came across a very odd match listing and I just had to share it here. 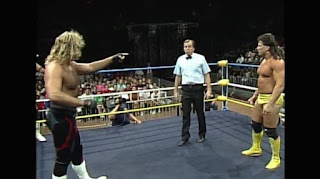 I know what you are thinking, one team losing tag titles to another team isn't that unusual, in fact it has happened several times.  What makes this unique is the next entry in the title lineage. 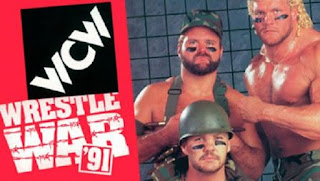 February 24, 1991 Wrestle War 91 Phoenix, AZ Veterans Memorial Coliseum
Michael Hayes & Jimmy Garvin (w/ Big Daddy Dink) defeated WCW Tag Team Champions Doom (w/ Teddy Long) to win the titles at 6:57 when Garvin pinned Simmons after Reed accidentally hit his partner with a foreign object thrown in the ring by Long, with Dink then shoving Garvin onto Simmons for the win; prior to the bout, the challengers were escorted to the ring by Diamond Dallas Page who then introduced Dink as the Freebirds' "road boss" before leaving ringside; after the match, DDP and the Diamond Dolls returned ringside and celebrated with the new champions as Reed assaulted Simmons with the weapon and left the ring with Long 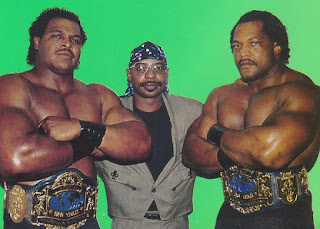 Yes you read that correctly they lost the titles 6 days before they won them making the Fabulous Freebirds that only Champions whose title run was negative days.  It was literally over before it began!

I realize that the match that was held on February 18th was taped for television and didn't air until March 9th, however they still technically lost the titles before even winning them.

This incident is a result of WCW and they odd televisions taping schedule for their syndicated shows which they taped several weeks in advance.  I recall reading in Mick Foley's book about how he watched the team of Pretty Wonderful: Paul Roma & Paul Orndorff cutting a promo about beating Cactus Jack & Kevin Sullivan for the tag team championships before Cactus and Sullivan had even won them. 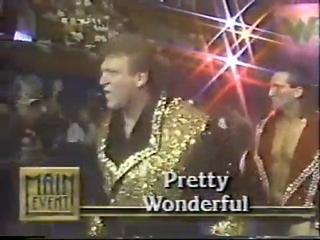 At the end of the day though,officially the Fabulous Freebirds were Tag Team Champions for negative six days.

The entire television taping held on February 18, 1991 thanks to www.thehistoryofwwe.com