This post looks at cards that I got signed at the recent Pro Wrestling Experience show on August 1st in Fairfield, Maine.  You can read all about that show here.

These two cards make it 23 cards that I have signed by Greene, the most I have signed from one person.  The card on the left from the July 2019 4 Corners Cards platinum series trading cards set.  The center card was released  in 2019 by Go Fight Pow as part of their wrestling trading card game.  The card on the right is not a card at all but a sticker that AG was selling.  It just looks cool.

Check out 4 Corners Cards and Go Fight Pow for these and their other cards.  Also Greene has them for sale himself. 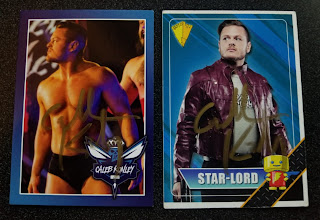 I bought these cards from Caleb at the show, he cut me deal because I bought a DVD as well of the this years Mark Hitchcock Supershow from New York as I was at that show.  The card on the left, I have no idea who released it.  The card on the right is Konley as Star Lord for the FSCW: Fantasy Supercosplay Wrestling promotion. 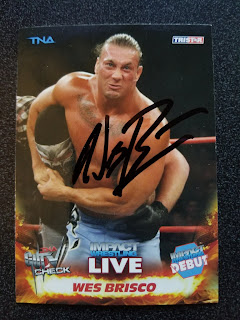 This card is from the 2013 Tristar TNA Impact Wrestling Live set.  The son of Jerry Brisco this card is his first every wrestling trading card. 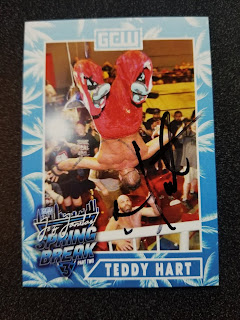 This card was is part of the Joey Janela Spring Break 3 Part 2 card set that was released by GCW: Game Changer Wrestling in 2019 in conjunction with the event. 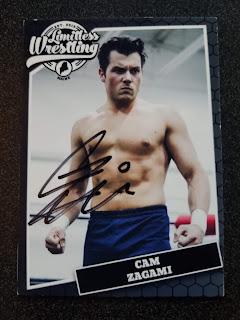 This card is part of the Limitless Wrestling series 1 trading cards released in 2018.

Until next time!
Posted by Michael J. Labbe at 5:24 PM