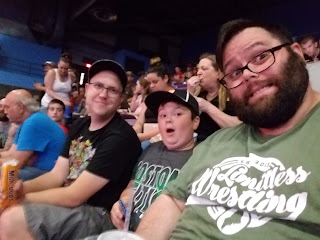 Monday night July 9th my son, cousin, and I attended the WWE Smackdown Live house show in Augusta, Maine.  The reason for the lateness of this report was that the following morning we headed out of town for the rest of the week camping and I'm just now getting some internet to write this. 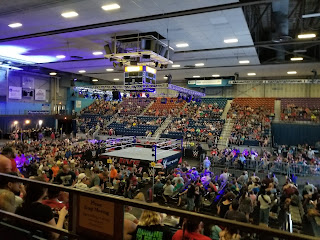 The Augusta Civic Center was not sold out but there was a few thousand people in attendance.  My wrestling friends Roy, Cheryl, Phil, and Alex also went to the show, I'm sure there were a bunch of other people that I know from wrestling that were also there. 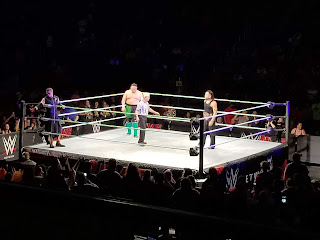 The Miz did his beast Rick Rude impersonation calling us Augusta sweathogs and asking us to keep the noise down while he took off his robe.  Solid opening match that saw Hardy get the pin after a twist of fate and a standing splash on Miz.

This match was great!  They gave us a good lucha style match with fast paced action and Sin Cara displaying some impressive aerial offense with a few dives to the floor.  This was probably the best match of the night!  I haven't thought much of Sin Cara but if he was given to chance to have longer matches like this many people would think differently of him.  Almas got the pin with his DDT finisher.

Cross was a surprise as she hasn't officially been called up yet to the main roster from NXT.  The IIconics came out and insulted us all before making their way to the ring.  Decent match where Nikki took the majority of the heat before making the hot tag to Becky.  Finish came when Becky submitted Peyton with the disarmer 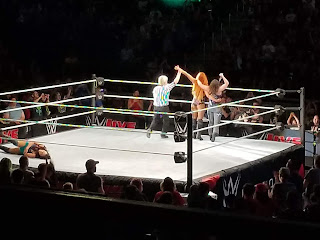 Dillinger was a surprise and had he not been facing Rusev I think he would have been tremendously over.  He was getting some good "10" chants until Rusev came out.  Short solid match with Rusev winning with the Accolade. 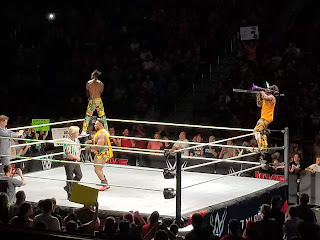 I was excited to see this as a six man.  It was a good match, with expected New Day antics and comedy spots.  Canaan wanted to see a Trouble in Paradise badly, and he got one post match. 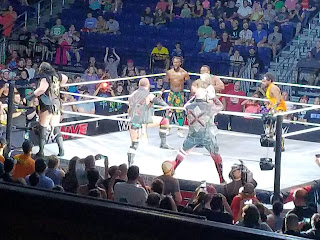 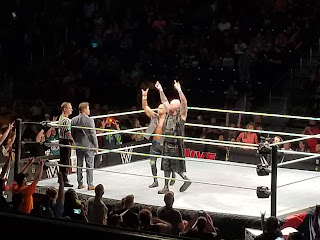 This was the first match after intermission and it was bad.  Rowan worked most of the match for his team and he's just not that good.  Anderson took the fall for his team. 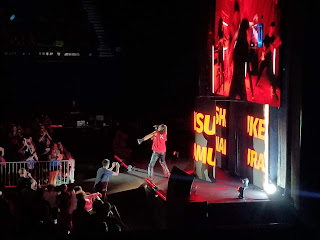 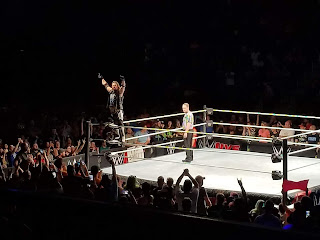 This was a great match and I'm so happy that I got to see these two wrestle each other live.  It was no five star classic but they worked hard and it was extremely entertaining.  This was also the match I finally found the right setting to get okay pictures on my phone. 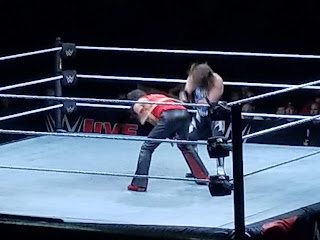 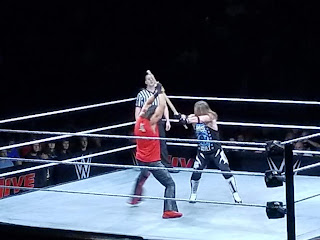 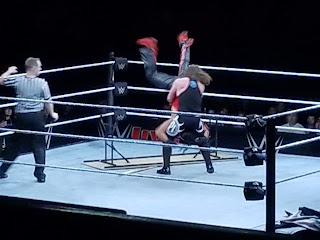 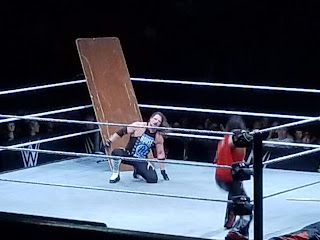 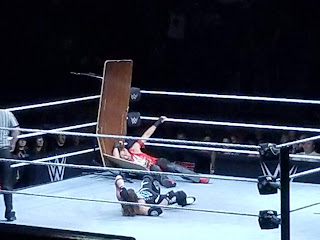 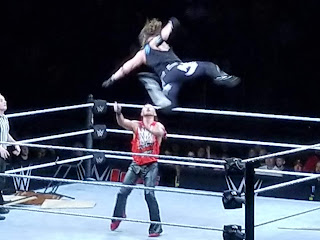 They used the standard house show weapons, table, chairs, and kendo stick.  Styles got the pin after a phenomenal forearm.

All in all this was a decent show with the top two matches being Almas vs. Sin Cara and AJ vs. Nakamura and the worst matches being the Tag Team and Women's title matches.  One thing that bothers me the most about house show title defenses is that I know I'm not going to see one so the finish of the match becomes a non-factor.

In the case of the AJ vs. Nakamura match it was exceptionally annoying, being a No Disqualification match the only possible outcome is AJ defeating Nakamura by pinfall or submission.

One of the coolest things for me was there were several wrestlers I had never seen wrestle in person before.

Later Readers!
Posted by Michael J. Labbe at 3:33 AM