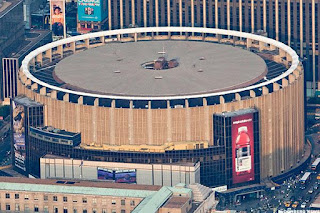 Finally in 2018 after talking about it for years my pal Jay and I made the trek and it was an amazing adventure.  You can read about it here.

Bruno Sammartino submitted Buddy Rogers to begin his historic championship run that was ended eight years later at the Garden by Ivan Koloff. 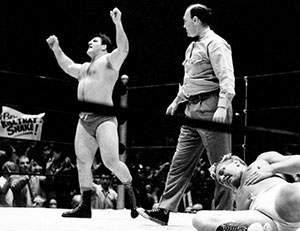 Bob Backlund's near six year run began and ended there when he defeated "Superstar" Billy Graham  and was defeated by The Iron Sheik in controversial fashion.

The era of Hulkamania kicked off in 1984 when Hulk Hogan pinned the Iron Shiek.

The first ever WrestleMania, the show that would change the landscape of professional wrestling around the world first came to us from the world's most famous arena.  As would WrestleMania's ten and twenty. 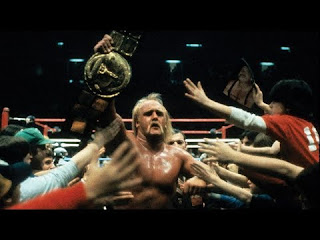 Most recently Bruno Sammartino was inducted into the WWE Hall of Fame at the building he made famous.

You frequently hear wrestlers talk about making their Madison Square Garden debut and how much it means to them.  Some wrestlers dream about wrestling at the Garden and consider it the greatest accomplishment of their career.  Long before wrestlers talked about having their WresleMania moment, they talked about their MSG moment.

However, even as important as Madison Square Garden is the WWE has been running the building less and less over the years from a month show to just three scheduled events in 2018 and in some years only 1 time.  The last pay-per-view held there was the 2011 Survivor Series.  Many blame the high cost to rent the Garden and the opening of the Barclays center in Brooklyn in 2012 as for WWE's decline in running shows there.

I recently read online that after WWE announced that WrestleMania would be returning to the meadowlands in 2019 but would be running Hall of Fame, TakeOver, Raw & SmackDown at the Barclays the final straw.

After never allowing any other wrestling promotion, NWA, WCW, ECW, the AWA and ect, that Madison Square Garden would now accept bookings.  Surprising the first company to jump at the chance was the lucha libra promotion AAA who allegedly have a hold on a date in September 2018.

Recently Ring of Honor have stated they will run the venue in 2019 and Cody and the Young Bucks have hinted at All In 2 in 2019 taking place there.  I've also read that WWE under their current deal with MSG has first rights of refusal to prevent other promotions from running shows.  So this all could be a power play by MSG to get WWE to run more shows with them and not at the Barclays.

I recently posed this question to a group of my friends:

Considering the potential of other wrestling promotions running there, does this make The Garden less special in the world of wrestling.

And here are their responses:

Brandon: contributor The Wrestling Insomniac founder of Video Store Corner and all around awesome guy

I don't see either of them (AAA or ROH) filling it up.  That's a difficult question.  If they run there and are successful it makes MSG even more special, but if they bomb or run a third capacity it does devalue it to some.

I don't think so.  Imagine how awesome it will be to see a Ring of Honor show there instead of a much smaller venue.  It's New York City it'll sell out.

Ronnie: baseball guru and wrestling fan and former co-host of Podcast of 1,000 Holds

I think it's a statement in general overall.  It's one of the last strong holds that the WWE has in the wrestling industry in general.  Now that wall is broken down.  Will it make The Garden less special?  Not to the hot indy wrestlers that will be able to wrestle there for maybe the first time ever.  Will it make it special once the WWE has a show there again down the line?  I think so.

I'm excited that AAA is running, I'd really like to go to that.  If ROH is running MSG during Mania weekend I may actually go to that show.  MSG is the home to the WWE but I totally get it on the MSG's side.  They should have had NXT or at leas the Hall of Fame at MSG during Mania.  I've always heard it's very expensive to rung MSG and it holds 20,000.  There is no way ROH is going to get that many people if they are going against NXT.  I love ROH but even I would have chosen the last Takeover over Supercard of Honor.

I don't think so, if WWE still used them for big PPV's maybe.  But they mostly were just getting house shows these days anyway.  Maybe new promotions can make it more special again.

I don't think it makes it any less prestigious.  It's still the world's most famous arena, and realistically who is going to draw a big enough crowd besides the WWE and UFC?

Jay: my buddy Jay of 25 years who made the trek to the Garden with me this year sums it up the best and I completely agree with him. 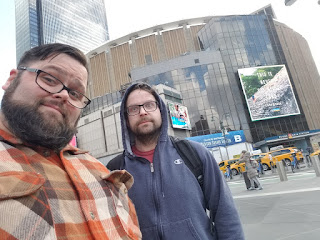 Absolutely it does!  Listen to the interviews of the wrestlers of the show we just went to.  The first tim is a goal on par with WrestleMania. While I would disagree that this current WWE is the best product around, it is still the place to go, the goal, of every wrestler on the planet whether they want to admit it or not.

I have to believe that when they walk that aisle for the first time they feel the Bruno's and the Roger's and the Graham's and the Blassie's that made it to the Mecca of wrestling and they earned it for being one of the best in the world of this sport.  Now? Well a guy named Cheeseburger gets to call his folks and tell him that he made it to MSG.

I have to believe that this is a power play by the management of Madison Square Garden to get WWE to run more shows and that WWE will do everything that they can to prevent this from happening.

Later Readers!
Posted by Michael J. Labbe at 6:32 AM