Women's Wrestling is more popular now than it has ever been in my lifetime with the casual wrestling fan.  After the Rock n' Wrestling boon of the mid 80's the Women's Wrestling seen slowly began to dwindle on the national level.  It didn't disappear it just wasn't as prevalent but it was kept alive with such groups as the Ladies Professional Wrestling Association, Powerful Women of Wrestling, and Delta Tiger Lillies to name a few.  Two women who toured this circuit as well as having exposure on the national level were Linda Dallas and Kat LeRoux (sometime spelled Kat LaRoux)

Information on these two ladies on the internet is scarce except what I have managed to put together in my research.  I would have thought with all the wrestling conventions these two, as well as Misty Blue, Black Venus, Heidi Lee Morgan, and other from that time frame would be making appearances at them.  I still hope one day to be able to meet them and thank them for their contributions to wrestling. 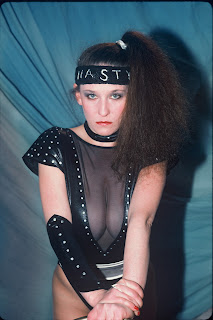 Hailing from the Utica, New York area Dallas began training in 1983 with Killer Kowalski in Massachusetts.  A long time opponent of Misty Blue they two would wrestle many matches against each other in many promotions from the independents, AWA, NWA, WCW, and more.  Often Linda Dallas found herself traveling around with Misty Blue and Kat LeRoux as well as other including Black Venus, Mad Dog Debbie, and more.

In 1985 Dallas would appear for Verne Gagne's AWA, and World Class Championship Wrestling in Texas.  In 1986 she found her way to Jim Crockett Promotions wrestling on and off until 1988.  She traveled around the independents in the northeast including Joel Goodhart's Tri-State Wrestling Alliance in 1990.  In 1991 Dallas and her troupe wrestled a few shows for World Championship Wrestling.

It was in the LPWA: Ladies Professional Wrestling Association that Linda Dallas and Kat LeRoux would adopt the tag team name of The Nasty Girls.  Even though they had been teaming together on and off for a few years. 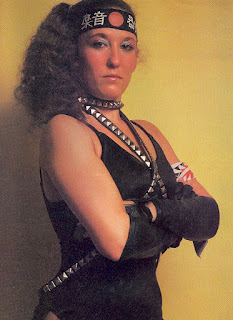 The Fall 1994 issue of Fighting Females Magazine has an interview with Linda about her retirement.  I have been trying to find this issue so I can read the interview.

The last record of a match I can find of Linda's was for the TWWF: Trans World Wrestling Federation in Sayreville, New Jersey on October 3, 1992 she was defeated by Misty Blue.

One of my favorite things about Linda Dallas was how she would yell and carry on in the ring.  At her opponent, at the referee, the audience, she was so loud and it was great! Trained with Killer Kowalski at his school in Malden, Massachusetts at the age of 16 debuting in 1985.  Initially a baby face teaming with Misty Blue before turning heel and joining Blue's nemesis Linda Dallas remaining heel for the rest of her career.

Her career path appears to parallel that of Linda Dallas, she too worked for, IWF, ICW, USWF, NCW, Jim Crockett Promotions, Florida Championship Wrestling, Delta Tiger Lillies Joel Goodhart's TWA and Tor Berg's LPWA where she teamed with Linda Dallas and they adopted the name The Nasty Girls.

She did and an interview in New Wave Wrestling Magazine issue 10 April 1993.  Again I'm trying to find a reasonably priced copy of this magazine to learn more about her story.

The last recorded match that I can find of Kat's is for the WWA: World Wrestling Association in Clementon, New Jersey on May 1, 1993 and she too was defeated by Misty Blue.  I read that she retired in 1995.

What both of these lovely ladies did after they left wrestling is essentially a mystery.  Again I would love to see them show up at a convention so fans can pay their respects.

You can find their matches on the WWE Network just search their names.  Also YouTube has many of their matches from through-out their careers.