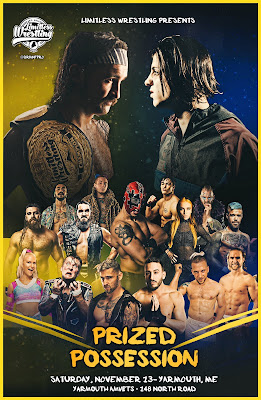 Limitless Wrestling returned to Yarmouth on November 13, 2021 for Prized Possession.  It had only been three weeks since the last Limitless show, which is perfectly fine with because a night at professional wrestling is a great night indeed.
JT Dunn pinned Anthony Henry
Outstanding opening match!  Very hard hitting with them exchanging shots, they did and old school crisscross, one of the best I've seen in a long time.  The finishing sequence was excellent involving a diamond dust, cutter, some cool reversals, ending with DBE.  Excellent match, go out of your way to watch it. 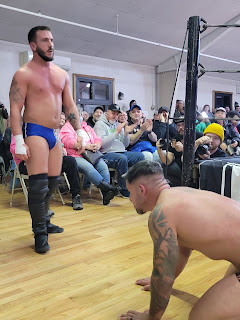 Since the return from the pandemic Dunn has been having some of his best matches of all time in Limitless.
Waves & Curls: Jaylen Brandyn & Traevon Jordan defeated Sidney Bakabella’s Slaughter: Max Smashmaster & Mortar 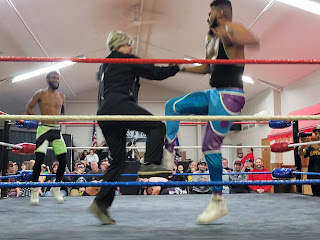 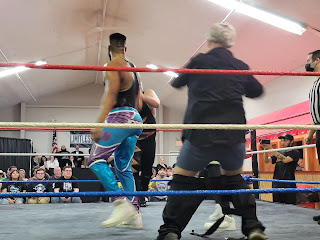 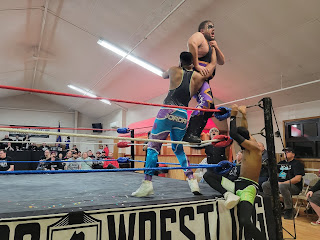 There was a ton of pre-match shenanigans before the bell rang including Bakabella dancing with Jordan and dropping his pants, I'm guessing as a distraction.  The crowd was solidly behind Waves and Curls, they got the pin on Mortar with an assisted chokeslam
Charles Mason pinned Big Beef
The build for this match was that Mason stole the photo of Beef's dead dog and burned it.  During this match Mason pulled out a dog collar and antagonized Beef with it.  They also fought out side the ring a lot before finally getting in the ring.  Another very stiff match with both guys laying them in.  Mason got the pin with and O'Connor roll holding the trunks. 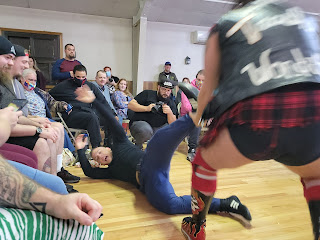 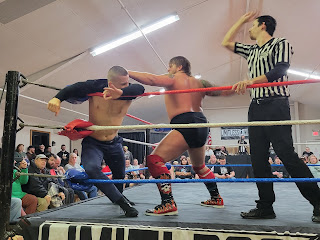 This war is far from over and I feel like when we seem them again it'll be a dog collar match!  Mikey does as well.
Jake Something pinned Kevin Blackwood
Great match!  I was happy to see both guys back and they put on a hell of a contest!  Great back and forth action, Something was way over and the fans loved to hate on Blackwood.  Something got the pin with a blackhole slam variation. 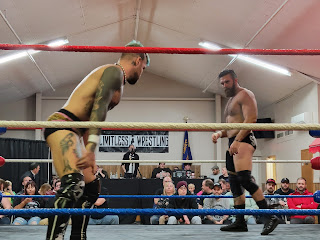 MSP: Aiden Aggro & Danger Kid and "Iron" Rip Byson defeated ARTE: Ava Everett, Ricky Smokes, & "Dime Piece" Aaron Rourke
Fun match!  Rip fit in nicely with MSP and their style. Ava is stupendous in everyway right now.  With Smokes and Rourke they are a great trio.  DK did three airplane spins in a row, one on each member of ARTE, I popped big time for it.
Finish came when Rip took the DK spot in the Drip Drop for the pin on Smokes. 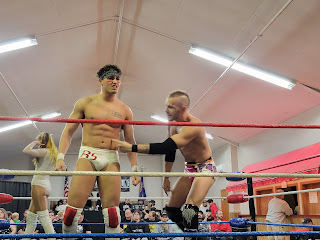 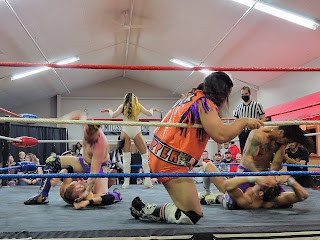 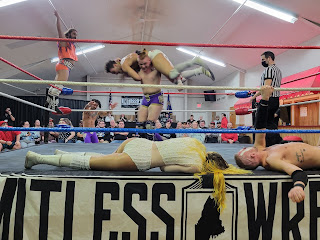 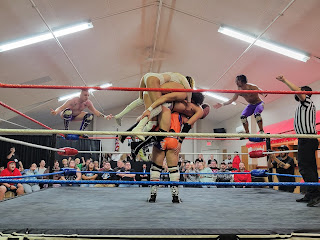 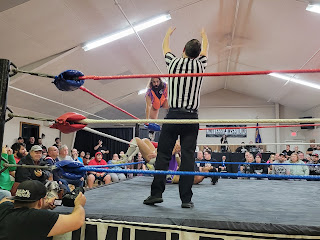 Post match: MSP challenged the Workhorsemen to a 2 out of 3 falls match in December at the final show of the year.
Austin lasted 31 seconds with Brad Cashew
Brad Cashew had an open challenge that a member of the "audience" Austin accepted, he lasted the 31 seconds to "win" the match.  Cashew then smashed Austin in the face with his text book.
Brad Cashew pinned Becca 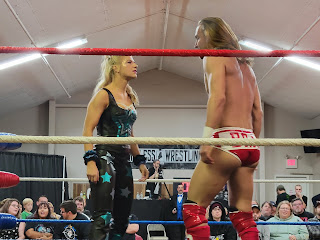 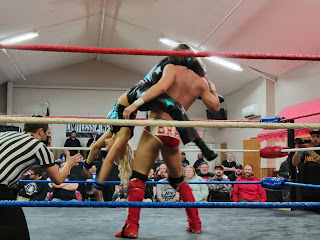 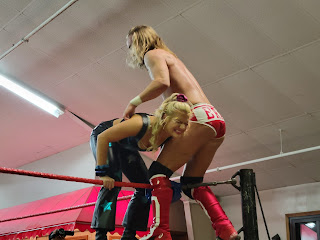 Cashew rebounded though and picked up a big win over Becca.  There were a ton of pin fall attempts in this match.  Brad attempted to cheat and Davienne came down to stop him, but she ended up distracting Becca who ate a spink kick from Cashew and was pinned. 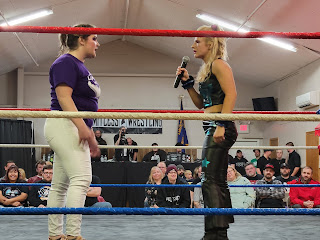 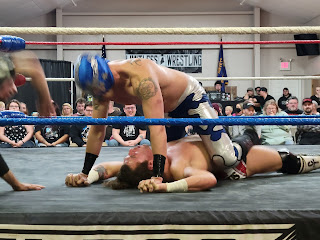 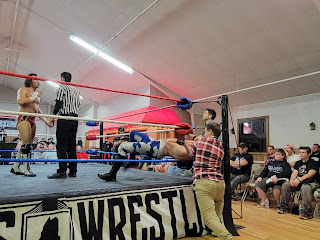 Fun match, it was great seeing Jigsaw in person for the first time in a decade.  He looked great in the ring and was getting the better of Thomas the majority of the match.  Mac Daniels & BRG were ringside and aided with the distraction that allowed Thomas to piledrive Jigsaw for the win.  I have a feeling Jigsaw will be back with a couple friends to take out all of Prestigious.
"The Prize" Alec Price pinned Limitless World Champion: "Alternative" Anthony Greene to win the championship
I was so torn in this match.  I have been a fan of AG since his MainEvent Wrestling days, he's genuine and I love seeing him as champ.  I've enjoyed Price since seeing him in Let's Wrestle watching him get better and rise up the ranks to Limitless and finally getting his one on one shot for the Limitless World Championship.  I was going to be happy no matter who won, but Price's story was powerful. 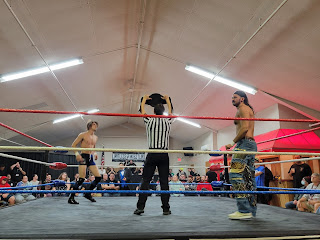 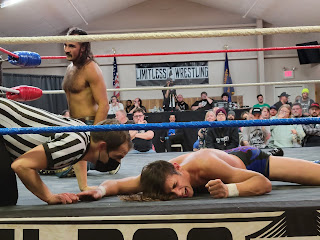 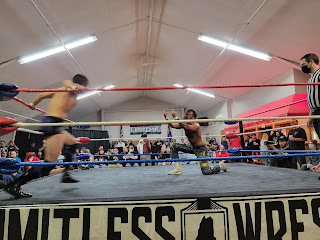 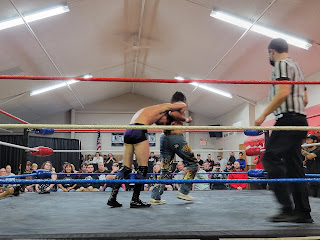 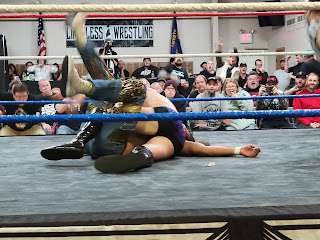 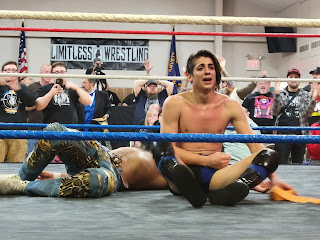 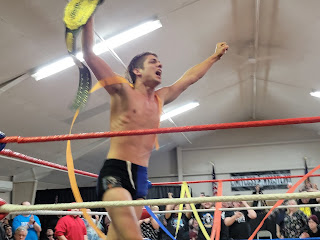 Love the match, they legit tore it up and put on a show for the crowd.  They wrestled in the ring, outside the ring, traded command back and forth.  Price got the pin after hitting his second Prize Kick to capture the title.  GO WATCH THIS ON IWTV!
Post match, AG said he was wrong about Price and that he was the future.  As AG was strapping the title on Price, JT Dunn attacked from behind taking out both with a death by elbow.  Dunn was setting up a chair to take out the new champ when Ace ran in for the save.  However Ace turned on Price hitting him with a package piledriver joining up with Dunn. 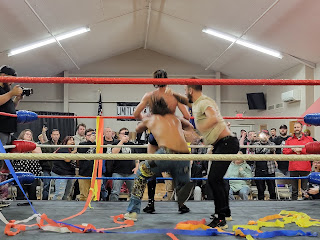 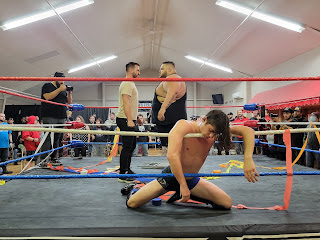 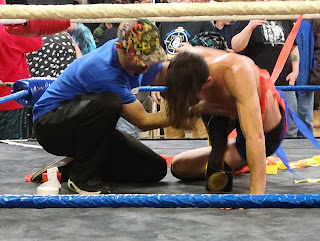 Limitless Wrestling returns on Friday December 10, 2021 in Yarmouth for the final match of the season.  Announced on the show was the return of "American Wolf" Davey Richards, the debut of Jacob Fatu, however since then both have pulled off the show, however we are getting Chris Bey, Shane Mercer, Matt Taven and others.  Don't miss out on the last Limitless show of 2021.
Thank you for reading, please leave a comment, check out my other posts, and if you want like my blogs Facebook page.  You can also head over to Amazon and pick up a copy of my new book Limitless Wrestling: The First Five Years, or any of my other books as well.
Until next time!!
Posted by Michael J. Labbe at 8:22 PM