Ring of Honor finally made their debut in my home State of Maine as part of the Global Wars Tour featuring talent from New Japan Pro Wrestling. 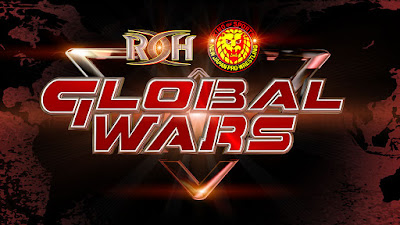 As excited as I was when Ring of Honor announced their Maine debut there was a couple things that surprised me about it; the fact that it going to be on a Wednesday night and at the Colisee in Lewiston.  Nothing against Lewiston, it was a rich history of professional wrestling with the Armory hosting the WWF from the late 60's to the early 80's.  Also I attended numerous EWA events at the Armory in the late 1990's, it's one of my favorite places to attend wrestling.

However, in the last 35 plus years WWE has only had two shows at the Colisee primarily sticking to Portland, Augusta, & Bangor.  WCW only ran two shows in Maine, Portland and Bangor, and TNA's only show was in Portland.

Roy, my daughter Addison, and I headed to the Dirty Lew for a night of wrestling.  We saw some familiar faces we typically see at show here in Maine including my buddy Phil.  My high school chum Ben had the seat behind me, it's always nice running into Ben.

Our seats were fantastic!  The venue was set up for about half a house, out seats were center ring in the front row of the first section off the floor so we were elevated over everyone on the floor even when they stood up.  Not bad at all for $30!  The house was maybe 1,000 people, but they were a lively crowd that were up for all the matches.  I do have genuine concern if ROH will come back, I hope they do. 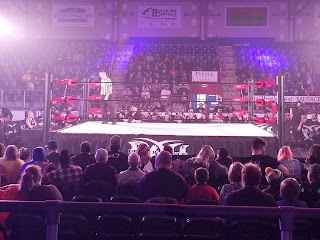 The matches were really good with some really great talent and everyone work hard putting on a good show.  Unfortunately two times during the night they lost power to their equipment and the fist time the building lost power as well with the emergency lights coming on. 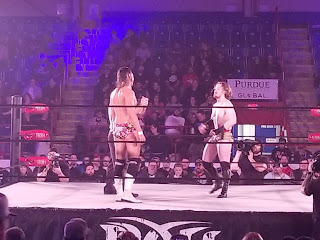 It was a nice surprise seeing AG on the show.  He got a good pop and was over with the crowd who booed Nova heavily only because they favored AG.  AG got a good ovation after his loss and I'm hoping this is a good step towards him signing with ROH.

Thursday Night ROH had a show in Lowell where Greene wrestled in the dark match on the losing end of a six man tag. 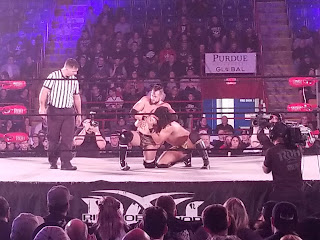 Solid opening match.  Flip was over with the crowd and he gave us some flips.  I wasn't impressed with Eli Isom at all, he botched a spinebuster where he just gently layed Flip down on the canvas.  Flip for the pin after a flip five. 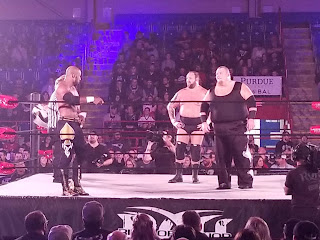 Great tag team wrestling with the champs bumping all around for bigger team.  I really like Beer City Bruiser.  He is a throwback to 70's wrestlers like The Crusher and The Bruiser.  Finish came when Milonas was in the corner and got caught by the champs for a double powerbomb. 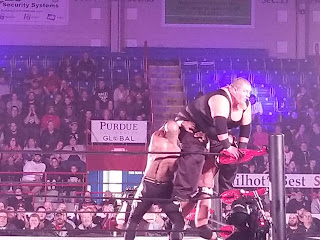 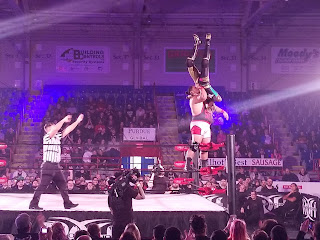 Matches started off with Cheeseburger attempting multiple offensive moves and Cobb defending them like it was nothing.  He basically treated Cheeseburger like he was a child.  Eventually Burger did get so offense in that rocked Cobb for a bit, but then Cobb hit tour of the islands for the pin. 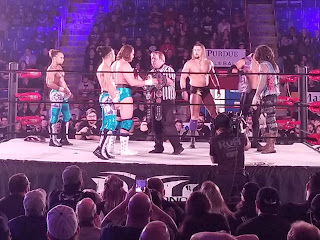 For majority of the match Marseglia did his hide under the ring crap which was fine with me until of course he came out.  Overall I enjoyed the match, a lot of wild brawling in and out of the ring with very little actual tagging.   Once Marseglia came out from under the ring he got in a bit of offense before Castle it Bang-A-Rang for a two count.  The match broke down again and the finish came with Marseglia and O'Ryan hit house of a thousand horses on one of the boys for the pin. 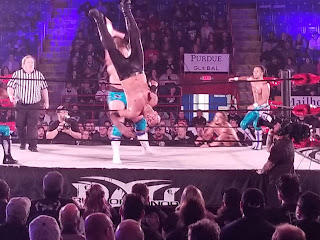 I'm waiting for O'Ryan to breakaway from the Kingdom and become the singles star he is destined to be. 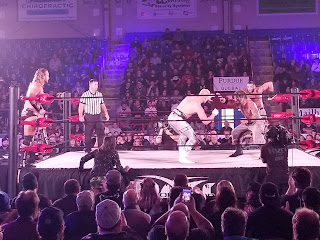 This match was fantastic!  All four of these guys are so good and they put on the match of the night here.  Page was the star of the match hitting his apron shooting star press to the floor and buck shot lariat.  He then hit a moonsault from the top rope to the floor on both Briscoes.  Cody hit Crossrhodes on Mark but Jay broke it up.  Cody was sent to the floor and after an attempted second rope rite of passage on Mark, Jay hit Hangman with the Jay Driller and Mark a froggy bow for the pin. 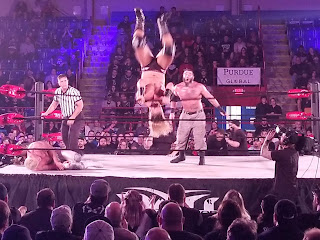 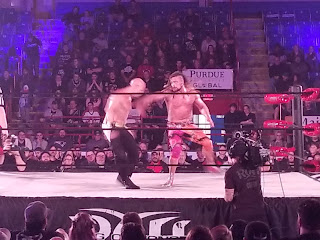 This was a good match but I think it had potential to be much better.  Juice for the win with pulp friction, 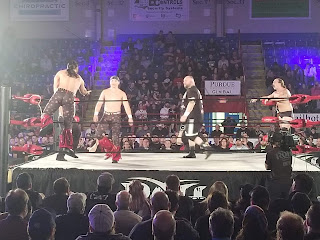 This was great match.  Ray and Young dominated Matt for the majority until he made the hot tag to Nick who came in a house of fire.  Surprisingly though, the bucks took the loss when Matt was hit with a low blow and Silas hit his finish.  The fans were shocked that the Bucks lost and disappointed. 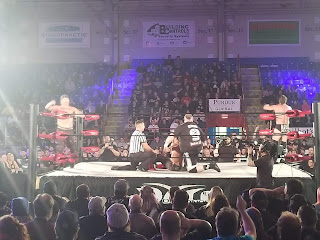 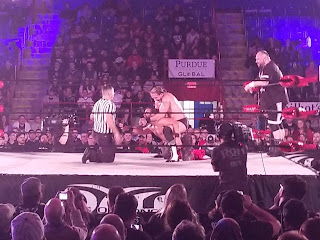 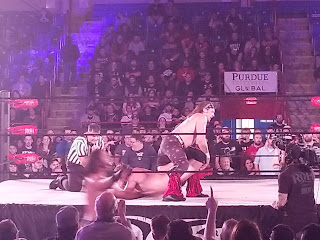 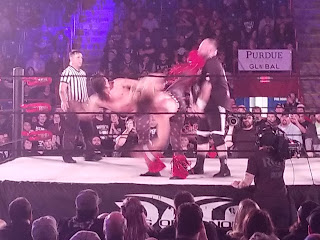 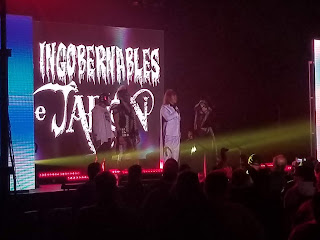 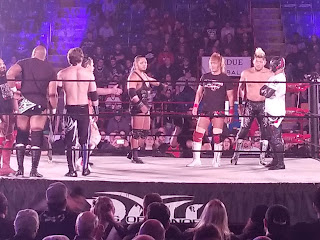 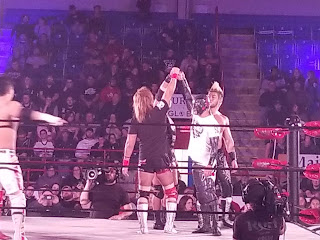 This match was all over the place!  LIJ and especially Naito was extremely over getting the biggest reaction of the night.  There was a lot of very fast paced action where Sabin and Kushida busted out some great combinations.  Gresham looked damn good in the match and we got the see LIJ get all their shit in.  Finish came when Gresham was hit with destino by Naito for the pin. 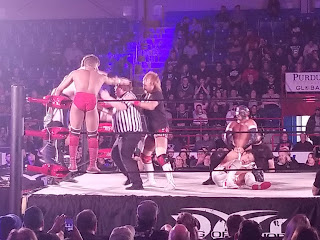 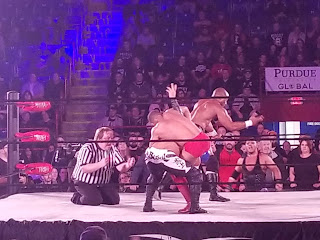 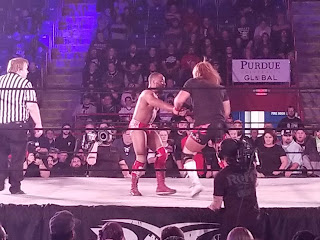 It was a fun night of wrestling, best show I've seen in the building and I went to the two WWE shows I spoke of earlier.  I really hope that ROH returns to Lewiston or anywhere in Maine in the future.

Later Readers!
Posted by Michael J. Labbe at 2:16 AM