The crowd was hot for both these guys, I thought it was odd that they made a point to not announce Roode as being from Toronto, the fans know he is, and then really brought it home that Dillinger was from nearby Niagra Falls. 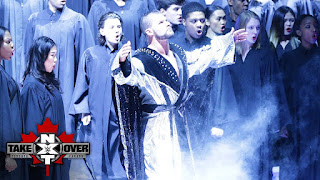 Couple of funny spots with Roode begging off with both hands and Dillinger turns it into Roode is saying "10".  Then stomping on Roode's hands and the way he shook them off Dillinger again implied Roode was doing his "10" gimmick.
Both these guys are veterans with Dillinger wrestling 15 years and Roode nearing his 19th, I would imagine this night was very emotional for both of them as this must be their biggest high profile match in their "hometown".
A really great match, during some reversals near the end Dillinger locked in a sharpshooter to a big pop.  Roode got the win with the Glorious Drop.  Post match Dillinger got a much deserved standing ovation as he apologized to the crowd for the loss.

They brought back the classic gimmick of having the manager in a cage above the ring.  Leading up to using this gimmick it was mentioned on NXT TV about the time Ellering was in a cage at the Last Battle of Atlanta.  During the match Ellering would shout instructions to his men.

There was a structure at ringside that was used to hoist and support the cage.  When I saw it I immediately thought if they didn't do a spot of it it would be a waste.  They didn't wait as moments into it Thorne dove off it onto The Authors of Pain. 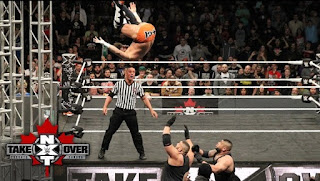 Thorne took the heat and made the hot tag to Miller who then cleaned out, I was surprised how much the Authors started bumping for Miller leaving their feet, taking bodyslams and suplexs.  Ellering drops a chain down, somehow the ref doesn't hear it hit the canvas.  Then it flies off one of their hands and into the crowd, no way the ref didn't see that.

AOP hits their finish and win the tournament.  Gotta say though the AOP were not as dominate as I thought they would be as TM-61 easily handled both of them.  Triple H, Dustin Rhodes, and William Regal were on hand for the trophy presentation.

Great start to the match, Revival quickly took the first fall when Gargano went for his patented slingshot spear from outside in and got caught with the shatter machine.  In the second fall Scott Dawson with a slingshot suplex!  Sincerely simply outstanding tag team wrestling.  The Revival are so great together, as are Gargano and Ciampa, but there is just something special about the Revival.

Second fall goes to DIY after they sandwich Dawson with a running knee and superkick.  Third fall started quickly after the second.  The action continued hot and heavy with so many reversals and high impact moves.  Gargano went for that rolling kick that he does and he kicks the title belt that Dawson was holding, it also busted Dawson open.  Dawson immediately locked on the inverted figure four that they used to win in Brooklyn, but Gargano made it to the ropes.  I really like that they didn't stop the match to tend to the cut. 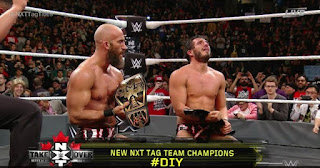 Revival went for DIY's finish, but the missed it, DIY hit Shatter Machine for a two count.  There was an unbelievable finishing sequence of pin attempts and reversals until Gargano locked on the Gargano escape and Ciampa the armbar for the tap out to capture the Championships.

I would love to see a return match with these two teams in a steel cage.

Fantastic opening lock up sequence with both getting a pinfall attempt in it.  Crowd gave Mickie a "you still got it chant" which is dumb because she's been wrestling steady since she left the WWE.  Action goes to the floor where James is wrecked with a german suplex on the floor.  James really took a beating this match, and she gave it right back.  She looked better in this match than I'd seen her in years. 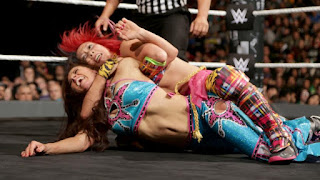 Asuka got the submission with the Asuka Lock but it really wasn't cinched in tight as usual.  Probably the sequence of rolling around the ring with James attempting to break and reverse the hold caused it.  James offered a handshake, but Asuka heeled her and raised the title in her face.

Crowd showed Mickie some appreciation, she appeared to get a bit emotional from it.  I wonder if this will be a one off for her and will we see her return to either NXT or main roster.

Nakamura's entrance was insanely awesome with all the violins.  A really good championship match with Joe dominating the beginning of the match.  Joe damaged Nakamura's knee early on in the match and it effected him through-out.  They really beat the tar out of each other, not surprising as Nakamura is the king of strong style.  Joe got busted open and once again they didn't stop it just let the incidental blood flow.

Finish came after both guys on the floor, Joe kicked Nakamura in crotch then slammed him on the stairs.  He then threw him in the ring nailed the muscle buster for the three count.  Not a clean finish due to the nut shot on the floor.  Makes Joe the first ever two time champ and makes Nakamura "human".  Can't say I'm happy with this finish, but with the show in Japan on December 3rd I imagine Nakamura wins the title back in his home country. 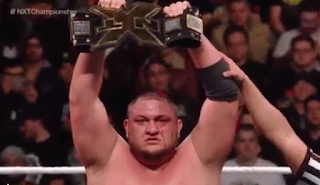 The crowd was shocked, and were very quite after it was over.  Seems like they were just as surprised as I was.  Eventually they started  "Joe" chant.

All in all a really good show where even the weakest match on the card was still a solid match.  Seems to be another scenario where NXT is going to top the PPV that follows it.  I know I personally was looking more forward to NXT Takeover than the Survivor Series.