No Way!? They Wrestled (Sting vs. The Undertaker)

I love obscure wrestling history and lately I've been invested in learning about matches that people tend to be surprised that happened (for example: Ultimo Dragon vs. The Macho Man). I thought it would be fun to highlight some of these matches and share them with the masses.

I think all wrestling fans of a certain age had an intense desire to see Sting and The Undertaker face-off against one another. It was certainly a dream match of mine. Of course, Sting was loyal to WCW and then eventually TNA. It wasn't until 2014 that it seemed like the match that so many of us wrestling fans from the 90's wanted was going to happen. Well... it didn't. Stings run in the WWE was a joke and two of the darkest superstars never faced off in an epic battle... or did they?

On September 1st, 1990 at the Greensboro Coliseum, The Undertaker, then known was Mean Marc Callous, challenged the NWA Heavyweight Champion Sting. Sting successfully defended his title and 2.5 months later, Mean Marc would debut as The Undertaker in the WWF.

Sadly no footage exists of this match and only a single picture has made it's way onto the internet. The two legends share the ring two days prior in a tag match where Sting and Lex Luger defeated Mean Marc and Moondog Rex. 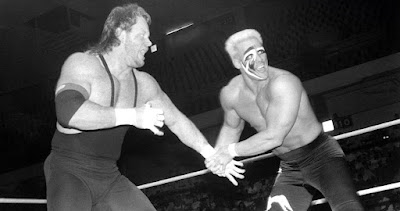 Email ThisBlogThis!Share to TwitterShare to FacebookShare to Pinterest
Labels: sting, The Undertaker