It's Sting! A WrestleCade 2021 Moment

The main reason I attended WrestleCade this year was to meet Sting. Sting is my favorite wrestler and is in the list of five celebrities I've always wanted to meet. Due to some financial restraints I was forced to skip meeting him several years ago at WrestleCade but I refused to be denied this year. It was a birthday gift to myself.

My buddy Jimmy and I found ourselves near the front of the line to meet Sting last Saturday morning. He walked in at 9:40 PM dressed in his ring gear and t-shirt and the crowd went nuts. He hyped everyone up and someone yelled, "What time is it?" and he responded, "Showtime, of course." 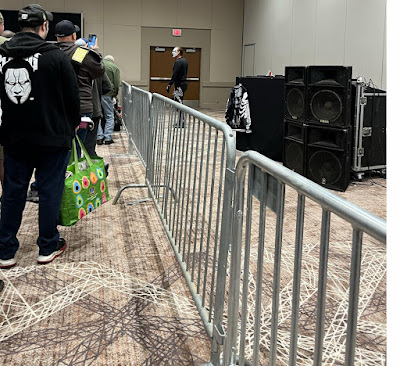 The lined move quickly as Sting power signed and posed with pictures. There was a concern that Sting may not make it through the massive line that had formed to meet him, but that wasn't an issue for us since we were so close to the front.

I'll be honest, it happened so fast I didn't even have a chance to speak. I wanted to tell Sting thanks for coming to AEW and tell him how much his feud with the nWo meant to me as a teenager, but by the time I walked up and shook his hand, I smiled and was on my way. My wife was kind enough to video tape the entire encounter which you can see here.


The photos were taken by the AML staff photographer and uploaded to Flickr five days after they were taken. I received simultaneous texts from Jimmy and Michael right as they were released and I'm quite thankful for that, because I still am not sure where they saw the announcement that they were ready!

I did some minor cropping, but I'm very happy with the photo. It wasn't the most interesting conversation or moment I had over the weekend, but I can say I've met Sting, the legend... The Icon and I'm so happy for it. 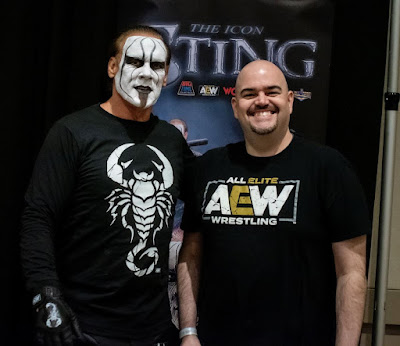