Last weekend, I attended my fourth Wrestlecade and this time it was better than ever. The event featured more guests and thankfully more space, which made for an incredible experience. I’m not exaggerating when I say it was one of the best days of my life. 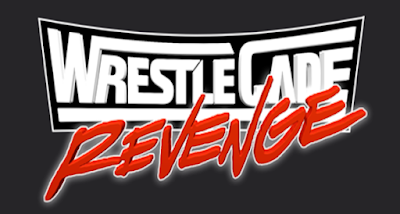 In the past, I’ve done a complete in-depth review of the event, but this year I want to try something a little different. Over the next several days/weeks, I’m going to post Wrestlecade moments. Brief recaps of some of my favorite moments from this past Saturday.

But to be fair, I use blog entries like this to gauge whether or not I attend certain events, so I feel that I need to at least say a few things about how everything went. 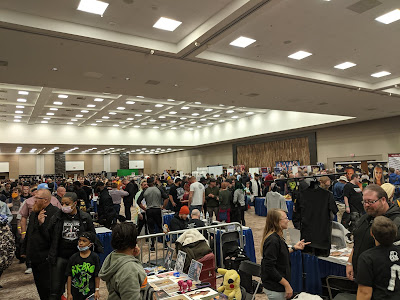 -Everyone was so nice. The wrestlers seem to be in even better spirits than the past and I had some many wonderful moments with almost everyone I encountered. I definitely left the event loving some of my favorite wrestlers even more which is always a good thing. 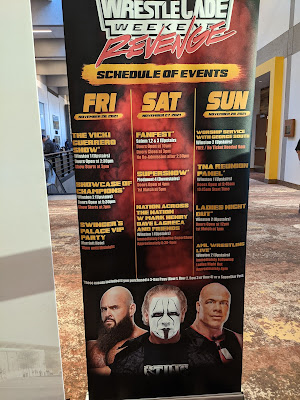 -I was able to meet everyone on my list but Malakai Black, and I probably could have met him but I just couldn’t commit to his incredibly long line. I heard lots of folks were upset who collected autographs because he only signed things “A B” or “M B.”

-I had front row seats for the SuperShow and this year they put your name on the seats for the first three rows! This was an incredible upgrade from the wild west chair roulette everyone played in the past.

The Bad:
-My main reason for coming to Wrestlecade was to meet Sting and sadly that encounter ended up being the worst moment of the day, no fault of Sting’s. Wrestlecade told folks to arrive at 8 AM due to the high demand for Sting, although he would not arrive till 10 AM. I got there at 7:50 AM and folks were already in line as early as 7:00 AM. Around 9:00 AM, the guy running the table announced for all preorders to line up which was ridiculous because a line of several hundred folks had already wrapped around the wall of the convention center. Folks flooded to the table leaving their space in line only to be rudely told that they “meant” Ultimate Icon pre-orders. Everyone scurried back to their original positions, irritated.

A few minutes later, he called for all remaining pre-orders and again, everyone broke from the line to get their paper tickets. After I got mine, I was told to line up against another wall, which would essentially be cutting everyone in line. I morally disagreed with this, so I returned to my original spot in line. Unfortunately, the other folks in line didn’t have the same values as I did and sudden a new line emerged that continued to grow and grow and I was pushed further and further to the back. At my wife’s behest, I went to get in the new line and ended up jumping in line with my buddy Jimmy.

More chaos ensued as people were turned away and despite saying all pre-orders it was only the Icon packages, somehow he missed that I didn’t have that. My wife got stuck outside the room and it got incredibly rowdy as the very rude guy in charge continued to fuck up a simple line so bad that it almost caused fist fights. I had to walk out of the room and grab my wife by the hand and drag her into the room past the guy in charge who rudely asked where we were going. Needless to say, it was an absolute clusterfuck and did not set a good first impression of the con. Thankfully, I was near the front and the line went fast. Do I feel like I got my $75 worth? No. We were ushered in and out very quickly, I had a moment to shake Sting’s hand and smile and I was sent off. We didn’t even get our pictures that day. Apparently they will be ready in 7-10 days and I’m guessing mass dumped onto Facebook.

Did I mention the guy running the Sting signing tried selling a $300 Sting jacket to all of us pissed off folks in line? Ugh 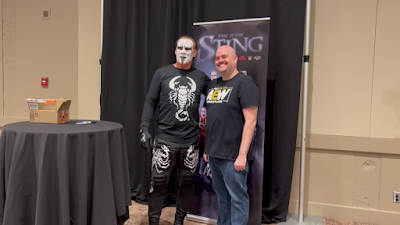 -As usual, a lack of staff was concerning. There were plenty of police officers, but not enough people to help guide folks into the proper lines. There were no signs, no barriers, and you were forced to fend for yourself. It was very easy to get into the wrong line due to the lack of assistance.

-The convention center has one ATM and it was out of cash by noon on Saturday. I expected more wrestlers to take cards than actually did, so I was forced to run a block over to find an ATM and grab some more cash. Not a major problem, just be sure to bring more than enough cash if you attend Wrestlecade and don’t rely on ATMs on site. 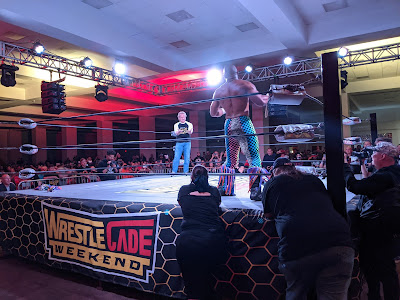 There are way too many photographers during the SuperShow and this may sound mean, but way too large of photographers. My view was constantly blocked as somewhere between three and five camera men and photographers jockeyed for a position. Not only did it give away all the cool spots, it also made it hard to actually see what was happening if it occurred on the mat. Look, I’m a big guy, and I’m all for everyone pursuing their passion, but if you want to be a ring photographer you need to be blend in with the ring some.

The text for The Bad is bigger than The Good, just because the Sting story needed context. Let me assure you, once I got past that one isolated incident the rest of the day went off without a hitch. I had an absolute blast and cannot wait to attend next year. I will be a bit more cautious with the special photo ops and I honestly don’t know if there is anyone outside of Sting that could bring me to ever deal with what I dealt with for his photo. Next year, I’ll just do the table side photos which is a lot more fun and gives you time to interact with the wrestlers.
Posted by Brandon at 8:34 PM