In August of 2007, I attended the NWA Legends Fan Fest in Charlotte, North Carolina with my good friend Jimmy. It was my first wrestling convention and a fantastic weekend that has stuck with me for years. I saw Tully Blanchard’s final match, The Rock N Roll Express wrestle The Midnight Express, met dozens of legends, and got to spend quality time with one of my best friends.

During that weekend, something else happened that became a highlight for me. I met one of my favorite wrestlers Daffney.

During the first day of the con, Jimmy visited the Highspots table and was helped by a cute woman who showed him a variety of small wrestling belts. It was a regular encounter that was nothing special, just two wrestling fans browsing a wrestling vendor’s table.

A few hours went by and autograph sessions occurred, more vendor browsing happened, and we spent time interrupting legends as they walked from one section of the Hilton to another to snag photos. Occasionally, Jimmy and I would split up due to him having a photo op experience or just browsing different tables, and it was during one these moments that I noticed the HighSpots girl chatting with a young woman named Talia Madison, who is now known as Velvet Sky. I saw a toy Cruiserweight belt over the HighSpots girl’s shoulder and it finally clicked to me who she was. She was Daffney from WCW!

I was blown away. I was a huge Daffney fan in those late years in WCW and had attempted to follow her career after WCW closed. There wasn’t much information online and I had chalked her up to just another lost female wrestler from the late 90’s/early 2000’s like Ryan Shamrock.

Daffney was not at the convention as a guest. She just happened to be there working the HighSpots table. I went about browsing the various vendors until Daffney went back to the HighSpots table and then I nervously walked over to greet her.

I remember sheepishly saying, “Daffney?” She looked up and smiled a huge smile. I’m assuming she was happy that she was recognized amongst a crowd of legends.

I told her how I was almost positive that was her and I apologize for not recognizing her earlier. I told her what a huge fan I was of her work with Crowbar and how she was by far my favorite female wrestler in that 1999-2000 time frame. She was incredibly gracious and thanked me and I asked her if she would mind signing my poster.

At the NWA Legends Fan Fests, they would give you a large poster that you could get signed by all the legends in attendance. I presented her with my poster and she smiled and said, “Well… I don’t mind signing it, but I’m definitely no legend.”

And in what has to be the cheesiest thing I ever said to a female I responded with, “Well to me your a legend.”

Again she smile, I blushed, and she happily signed my poster and put a huge heart next to her name. I asked if she would mind taking a photo and she happily obliged and for years, it’s been one of my favorite celebrity encounters. 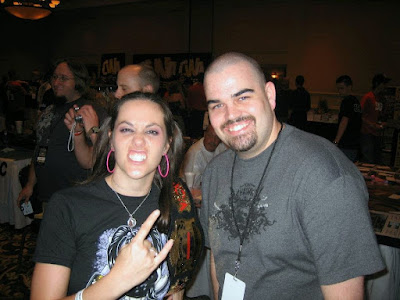 Last night, Daffney Unger passed away at the age of 46.