Recently, Luthor (formerly known as Dr. Luthor) main evented AEW Dynamite in a match where he tagged with Serpentico to take on Chris Jericho and Jake Hager. This seemed a little odd since Luthor debuted horribly in 2019 and has pretty much wrestled on Dark ever since. It turns out Luthor and Jericho came up together so this was the reason why he was included in the match that was celebrating Jericho's 30th wrestling anniversary. 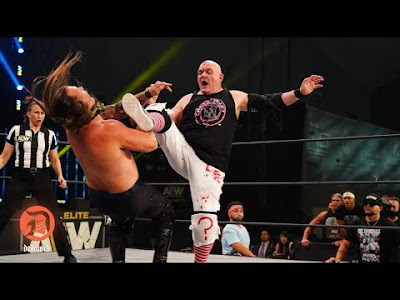 I decided I needed to do some research on Luthor, since other than him being sold as the Deathmatch Legend by Excalibur, I knew nothing about him. I checked out a few matches on YouTube and read through a few articles on him when I ran across a little tidbit. It turns out Luthor had a single match in WCW back in 2000. Thanks to YouTube I was able to locate it.

The match took place on WCW Worldwide and Luthor (known as Mad Jack) took on Vampiro. The match was no where near a classic, but there is an interesting backstory to it all as told by Luthor recently on Chris Jericho's podcast:

"So then WCW I go and it went so-so," Luther admitted. "I did a couple shows, but you know how they have you sometimes as security guys or whatever like that, backstage talent or whatever. So, it was cool. I mean, you still get to make a payday, but then I'm wrestling in Kelowna against Vampiro, and so I talked to him the day before and he was not super cool. He was pretty drugged out in my opinion. I'm not a drug counselor, obviously, but I don't know.

"I even was super nice because he wrestled in WAR. I was like, 'hey, we've worked for the same company in Japan and just wanted to say hi because we're working tomorrow,' and I always feel like I get along with people in the dressing room. And he's just being a dick. He didn't like you, and I noticed a couple people. People who had heat with you, then had heat with me off the bat, and I was like, whatever dude. So we go over the match. It's on TV. It was the very last Worldwide. So we go out, and we have all this stuff, but then he's kind of no selling my s--t.

"And I'm selling all his stuff, and then time for me to do stuff and he's like, 'no, we got to take it home.' But then the day after, he comes up to me actually before the match, and he's like, 'I just want to apologize. I didn't know who you were yesterday, and then people were telling me you were like big in Japan. Sorry for how I acted.' Your a dick. I don't really care, so that's how that went."

Apparently, WCW was impressed since Terry Taylor offered Luthor a three year deal that paid $130,000 the first year and then $210,000 the second year, and over $300,000 in the final year. However, Luthor was living in Canada at the time and did not have a work visa and that messed up his chance at being signed.

Luthor went on to wrestle in the independents for the next nineteen years before signing with AEW in late 2019.

It's hard not to day-dream about what could have been had Luthor signed with WCW. Would he have made an impact? Would they have wasted him? Would he have went onto greater success in WWE once they purchased WCW? Of course, we will never know the answer to those questions, but I'm happy to see that Luthor has a spot on the AEW roster in 2020.