I’ve never seen a picture of him nor do I know much about him.

The one thing that I do know about Blaine Hutchens is that he loved professional wrestling more than life and because of that I was compared to him throughout my childhood.

My father’s side of my family calls the Foothills of North Carolina home. They are small town, country folks who spend their weekends hunting, playing the fiddle, and watching The Race. My great-grandmother, Granny, grew up down a tiny dirt road and with exception of coming to live with us for a couple years in Orlando, she never left that street. It was where she grew up, where she called home, and where she died.

Granny suffered from Alzheimer’s and usually sat in silence, dipping snuff until the sun went down. That’s when she started talking about needing to go home. Despite being in her 80’s, she was terrified that her mother didn’t know where she was and that she was going to be in trouble for not getting back home before dark. It would take some convincing, and some lying, but eventually she’d settle down, start rocking in her chair again, dip snuff, and watch TV.

My grandmother, Nanny, lived with her and took care of her, and I spent many of my summers with them throughout the late 90’s. Nanny was great about allowing me to watch whatever I wanted on the TV with exception of a few set times.

-I couldn’t touch the dial at noon because the news was on.

-After the news, Days of Our Lives came on.

-And then at six o’clock, it was time to turn the dial back to WXII Channel 12 to watch the news yet again.

Basically, I had to find something to do for about two hours each day, which was not a problem when hanging out in the country.

During those summers with Nanny and Granny, I really only wanted to watch a couple things on TV. One was MTV Spring Break and the other was wrestling.

Looking back on it, I feel bad for my poor grandmother and great-grandmother. They sat through at least two months of everything the Attitude Era could throw at them. They sat in the living room watching stuff I’m almost embarrassed to say that they watched with me. I can distinctly recall Nany spending a good portion of every Monday night catching up on all the latest tabloids. She was rarely without an issue of the Inquirer or Star within arm’s length. But Granny didn’t care. She just sat there packing in the Dental Mild Snuff and watching whatever Vince McMahon would throw at her.


Of course, being the fan that I was/am, it was rare for me to sit in silence and watching wrestling. I’d be jumping off the couch cheering my favorites, and in general marking out over everything. I’ll never forget sitting in her living room watching the WWF debut of Chris Jericho and absolutely flipping out like a little girl at an N’Sync concert. Granny sat rocking in her chair and laughed a little and remarked something I heard every time I watched wrestling, “Rassie (my grandmother), he’s just like Blaine Hutchens. Look at him go.” 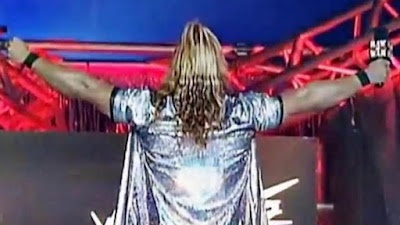 Nanny would look over and with a sincere smile say, “Yes he is.”

I was usually too busy watching the action to really care what was being said, but during one slow show, probably a WCW Worldwide, I finally decided to ask about this mysterious Blaine Hutchens that I was so commonly referred as being like.

Nanny proceeded to smarten me.

Blaine Hutchens was a family friend who came over every week to watch wrestling back in the 50’s and 60’s. Like me at the time, he didn’t watch silently. He was constantly jumping up from the couch, throwing punches, and screaming for someone to kick the heel’s ass. According to Nanny, it was more entertaining to watch Mr. Hutchens than the wrestling.

People in Yadkin County North Carolina don’t usually have much money, and Blaine Hutchens was no different. Mr. Hutchens couldn’t afford tickets to wrestling, so each week he experienced wrestling the way most people did, on the television and not in person. But his passion for the product and years of loyalty was rewarded when my great-grandfather decided to surprise him with a trip to Winston-Salem to watch a show live. He was beyond himself and you would have thought that he had won the lottery. He was finally going to see wrestling live and in person.

I wish I could say the story has a happy ending but it doesn’t. According to Nanny, Blaine Hutchens stop coming around to watch wrestling after attending the live event. He was reportedly crushed to find out that wrestling was not real fighting, and he felt betrayed. He gave up on wrestling after that night, but to his friends he would always be defined by his love for professional wrestling. I take pride in knowing that my passion for wrestling was compared to his on a weekly basis for several years and I really wish Mr. Hutchens wouldn't have lost his passion for pro wrestling.
Posted by Brandon at 9:08 PM