Last Friday, Smackdown aired without any fans in attendance which was a sight to be seen. 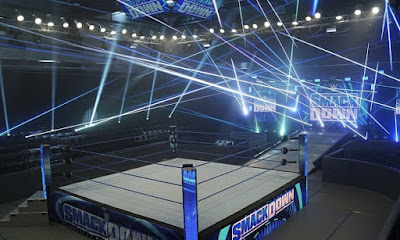 As of right now, we are on a path to see a lot of empty arena matches with this coronavirus on a rampage. It’s wild to think that Wrestlemania will be held with no fans when WrestleMania is always associated with such a massive audience. But this is the current state of the world that we live in.

With all these upcoming empty arena shows, I got to thinking about all the empty arena matches that have occurred over the years. I went online for a complete listing and was shocked that I couldn't find one. So, this is my attempt at collecting all the empty arena matches that have been held in the United States by major promotions. This is by no means a complete list as I'm sure there are other matches I just don't remember or didn't run across in my research.

This is the match that I think about when I think of empty arena matches. It was the first (as far as I know) and the most memorable. It's not as much of a match as it is a brawl, but it was iconic and had two of my favorite performers putting on an incredible show. Let's not forget to give Lance Russell credit for his amazing commentary during this match.

A year after the epic Lawler empty arena match, Terry Funk found himself in Florida facing off against Bruce Walkup in an Empty Arena Bunkhouse Steel Cage Match.

First off, who is Bruce Walkup? Well, Bruce Walkup was a wrestler who was in Championship Wrestling from Florida for a month or two in 1982. He did some referring, but his career seems to consist just of those few months in 1982. He is, however, remembered in pro wrestling history as Terry Funk's adversary in this unique matchup.

The match is brutal, with Terry Funk destroying Bruce Walkup.

Considered lost for thirty years, this gem of a show was added to the WWE Network in late 2018. This taping was a reboot for AWA in it's dying days that was created in hopes to revitalize interest in the fledgling company and cash in on the popularity of other competition shows such as American Gladiators and Roller Games.

The AWA intended on using this pilot to launch the Team Challenge Series, which did actually occur, but not as part of this new AWA presentation. 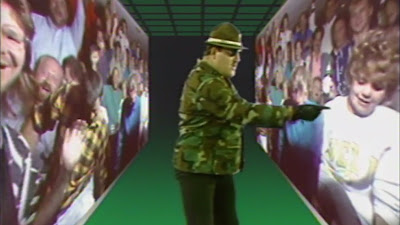 What makes this show so unique is that it was filmed without fans in the audience. To make things a bit stranger, they actually used green screens to display video of fans from other shows to give the illusion (and I use that term loosely) that fans were in attendance. As far as I know, this is the first complete wrestling show filmed without an audience in attendance.

Be sure to check out Michael's complete review of the The "New" AWA.

AWA revamped and launched the Team Challenge Series with a series of tapings at the Mayo Civic Center in Rochester, Minnesota. I've heard mixed reports but either a very low attendance or damaged footage caused another taping to occur in what has been dubbed the "pink room."

Basically, an entire show was taped in a studio with pink walls with no fans in attendance. Security surrounded the ring to prevent interference and hypothetically ensure that the One Million Dollar Prize would be fairly awarded.

This taping is probably best known for having a Turkey on a Pole Match.


Here are the complete results from the taping:

When the NWO won the 1996 War Games they were awarded a series of segments on WCW Saturday Night, that they dubbed NWO Saturday Night. The matches were held in an empty arena with NWO members providing commentary and the use of canned audience reactions to break up the silence. All of the matches were against jobbers, which shouldn't surprise you considering the way the NWO acted at the time.

None of the matches are all that memorable or good, but the commentary makes them worth a watch.

Arguably the most famous mainstream empty arena match, The Rock and Mankind faced off in a brawl during Halftime Heat back in 1999.

The match is more akin to a hardcore match than an actual wrestling match, but it made for good enjoyment and a very memorable night of wrestling. 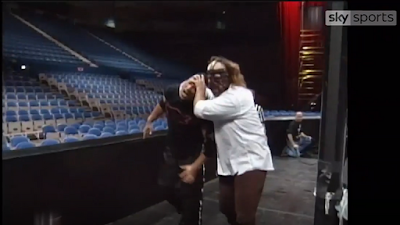 In 2009, Sting and Kurt Angle faced off with no referee in an empty Impact Zone. Kurt Angle and Sting were facing off due to a disagreement regarding the Main Event Mafia and this match (more like a brawl) quickly was forgotten after it occurred.


The sleeper empty arena match of this list is The Motor City Machine Guns vs. Generation Me (The Young Bucks) that aired on TNA Reaction back in 2010. I didn't know this match existed between two of my favorite tag teams and it's definitely worth a watch. It's a very entertaining match presented in a more realistic fashion. It gives me a lot of hope to see what AEW pulls off this upcoming Wednesday on Dynamite.

Another forgotten empty arena battle saw Braxton Sutter face off against Rockstar Spud in an empty arena that featured exposed turnbuckles. This match ended the several months long feud between the two opponents.


When Billy Corgan relaunched the NWA the series focused on Tim Storm and Nick Aldis. One of the earliest feuds for Storm was with Jocephus that cumulated in an empty arena match. The match was not very good, but was way more hardcore than anyone expected out of the fifty+ year old Tim Storm. He took a crazy bump onto the ladder and that made the match memorable for me.
Posted by Brandon at 11:46 AM