Last week, I attended my first NXT event from Full Sail University. After an amazing show in Durham earlier this year, I was excited to see NXT at its home arena. No doubt, Full Sail will go down as an iconic wrestling venue in the future, so I’m glad I was able to check this off my wrestling bucket list.

By now, you all probably know what happened on the show, so I’m going to spend less time talking about the matches and more about the experience at Full Sail. 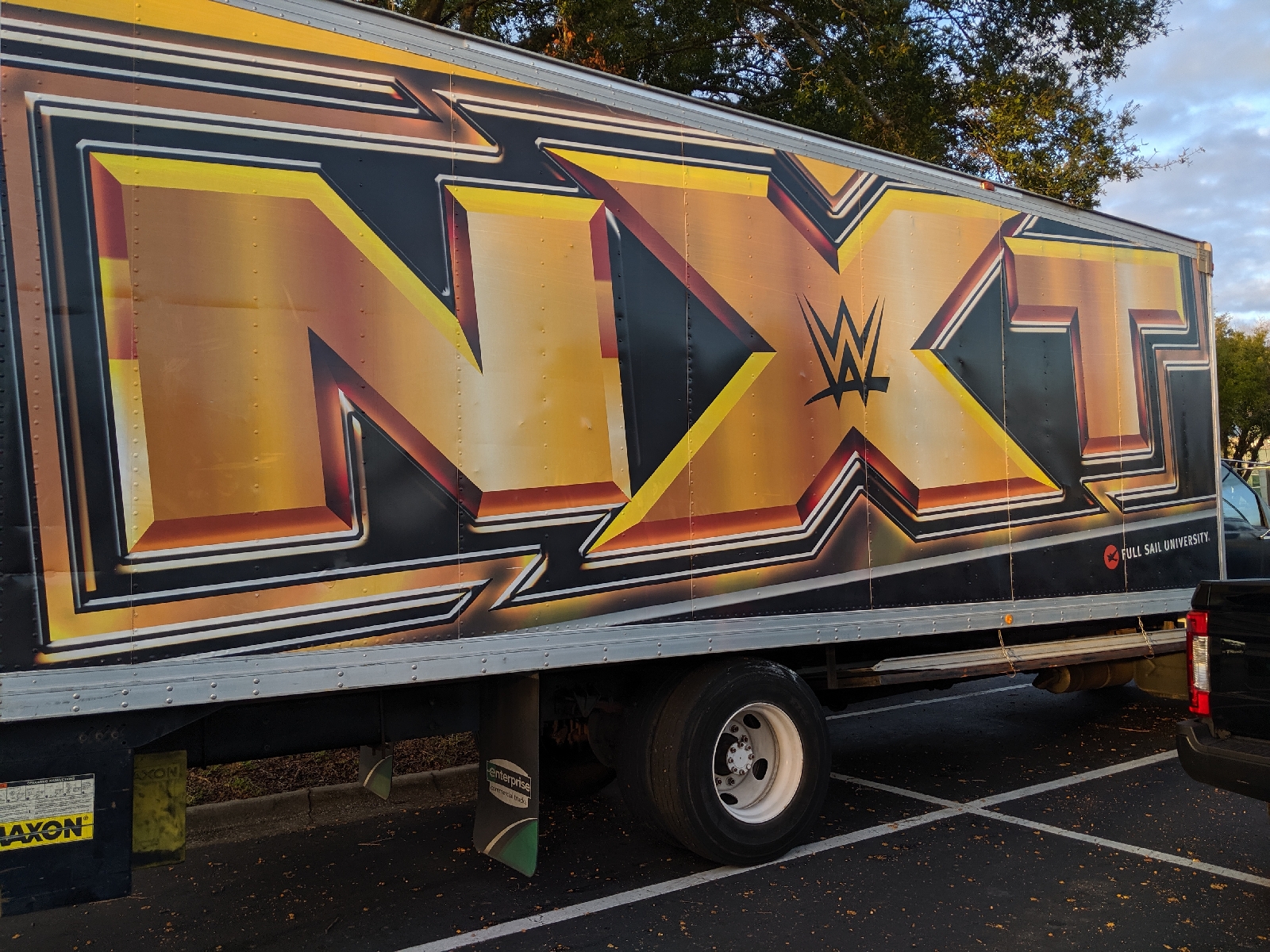 The arena at Full Sail University is located in what is best described as a strip mall. Within the same parking lot as the arena are a few restaurants like Wendys, McDonalds, an ale house, and a Taco Bell. Across the street is a Costco, so this isn’t the type of place you traditionally watch wrestling. What’s nice about this location is there is plenty of free parking, it’s easily accessible, and the arena is small, probably about the size of a CVS drug store. With it being that intimate, there isn’t a bad seat in the house.

My girlfriend Brandy and I arrived about forty minutes before the doors open and found a line that was already eighty people deep waiting. We hopped in line and listened to wrestling fans banter while waiting for the doors to open up. 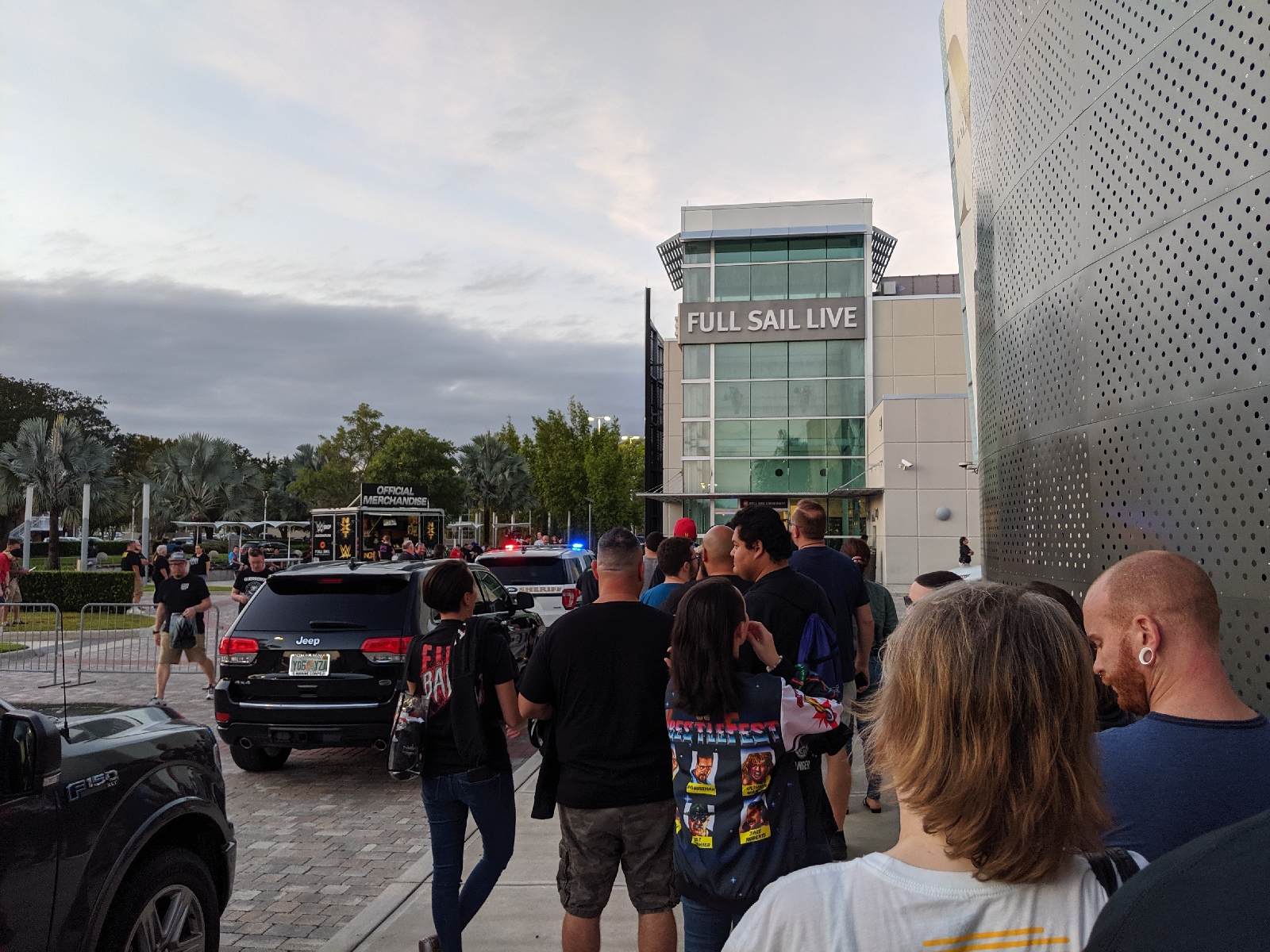 Outside of the arena is a small NXT merchandise trailer where you can buy the latest swag. Inside there is a small table which seemed to be run by student volunteers who were selling canned soda, bagged chips, and some candy bars. It had a very low budget indie feel to a big budget indy product, which was interesting.

Full Sail has some extremely strict rules regarding bags that can brought into the arena. Basically, you can bring in a wallet or a very small purse and that is it. The woman in front of us had what I’d describe as a small purse, and it was still too big to be brought into the arena. They have metal detectors and when they give you the canned soda, they tear the tabs off the top of them. It seemed a bit excessive, but I guess you can never be too careful.

The staff was organized and directed everyone onto the bleachers in an orderly fashion leaving. What I didn’t realize is that Full Sail only has bleachers on one side of the arena. It’s not completely surrounded by seating. It’s also much smaller in person than it seems on TV. Some of these pictures might give it better scale than what’s on TV. 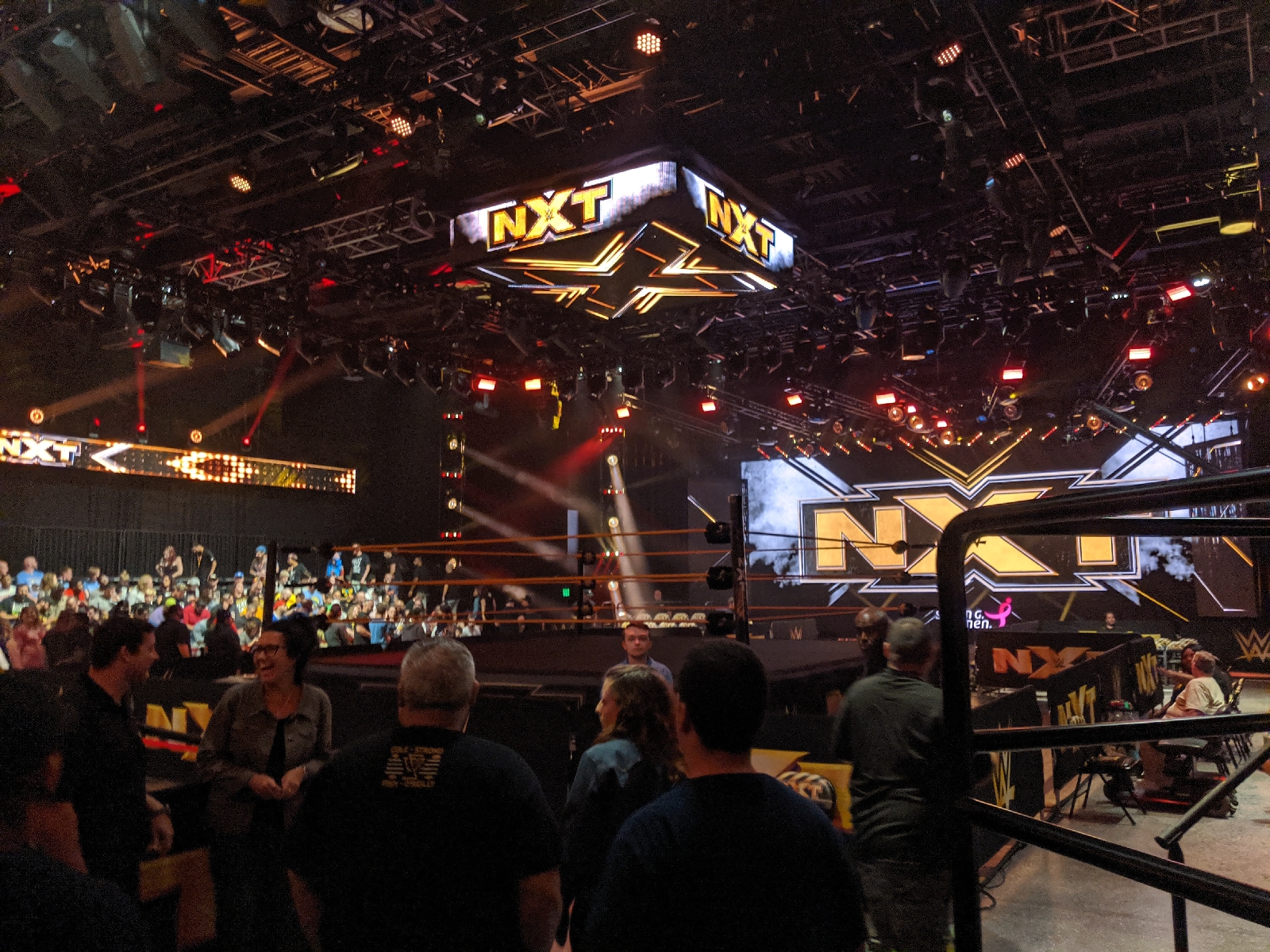 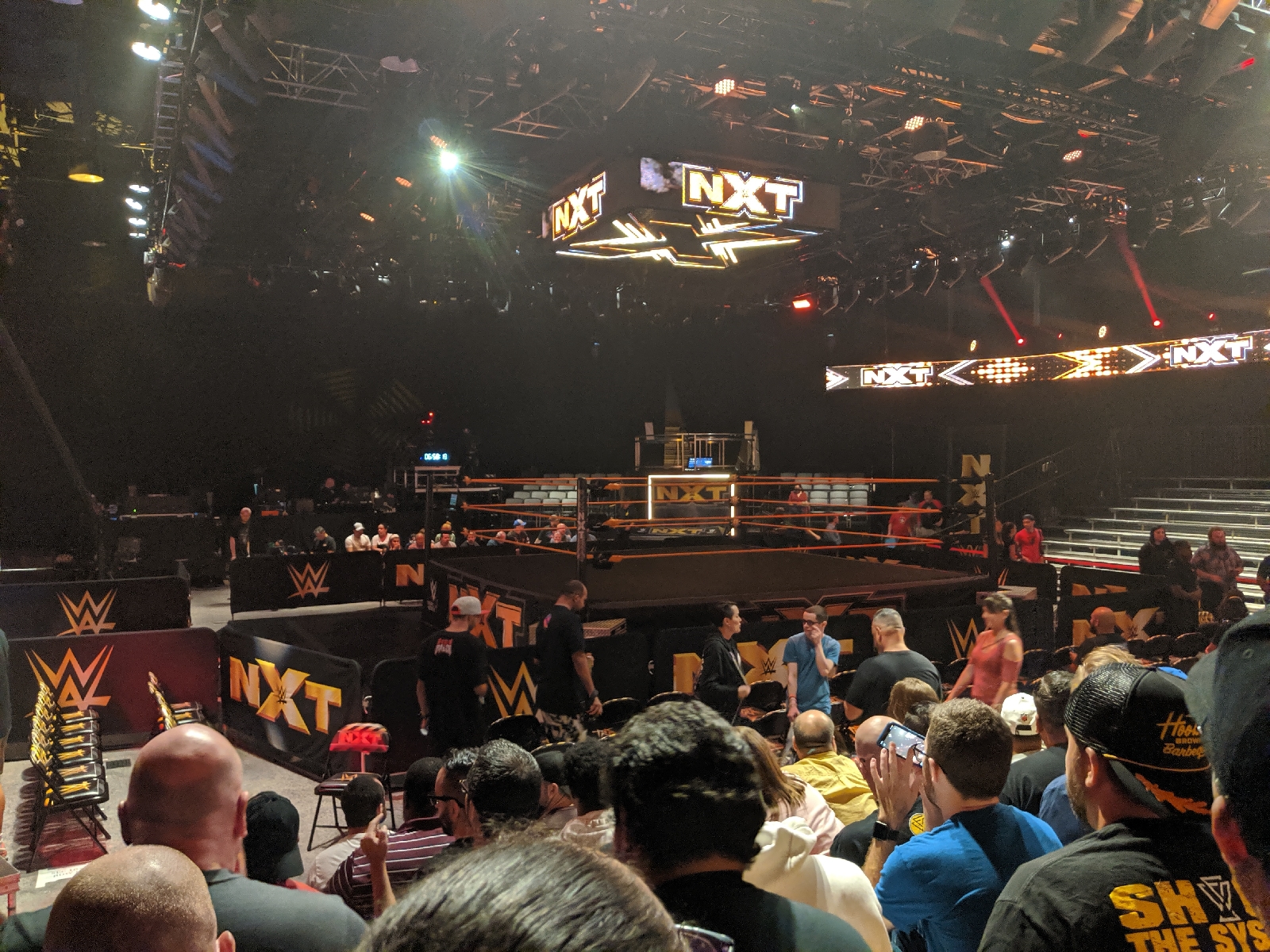 It was very abundant that NXT is a television production and not a wrestling show. The referees were constantly directing the talent when to taunt the camera, exit the ring, pose on the ramp, etc. The camera men were constantly working the crowd up in a frenzy and I’ve just never seen that before at a wrestling event. It felt so staged and really killed any suspension of disbelief that may have been occurring. 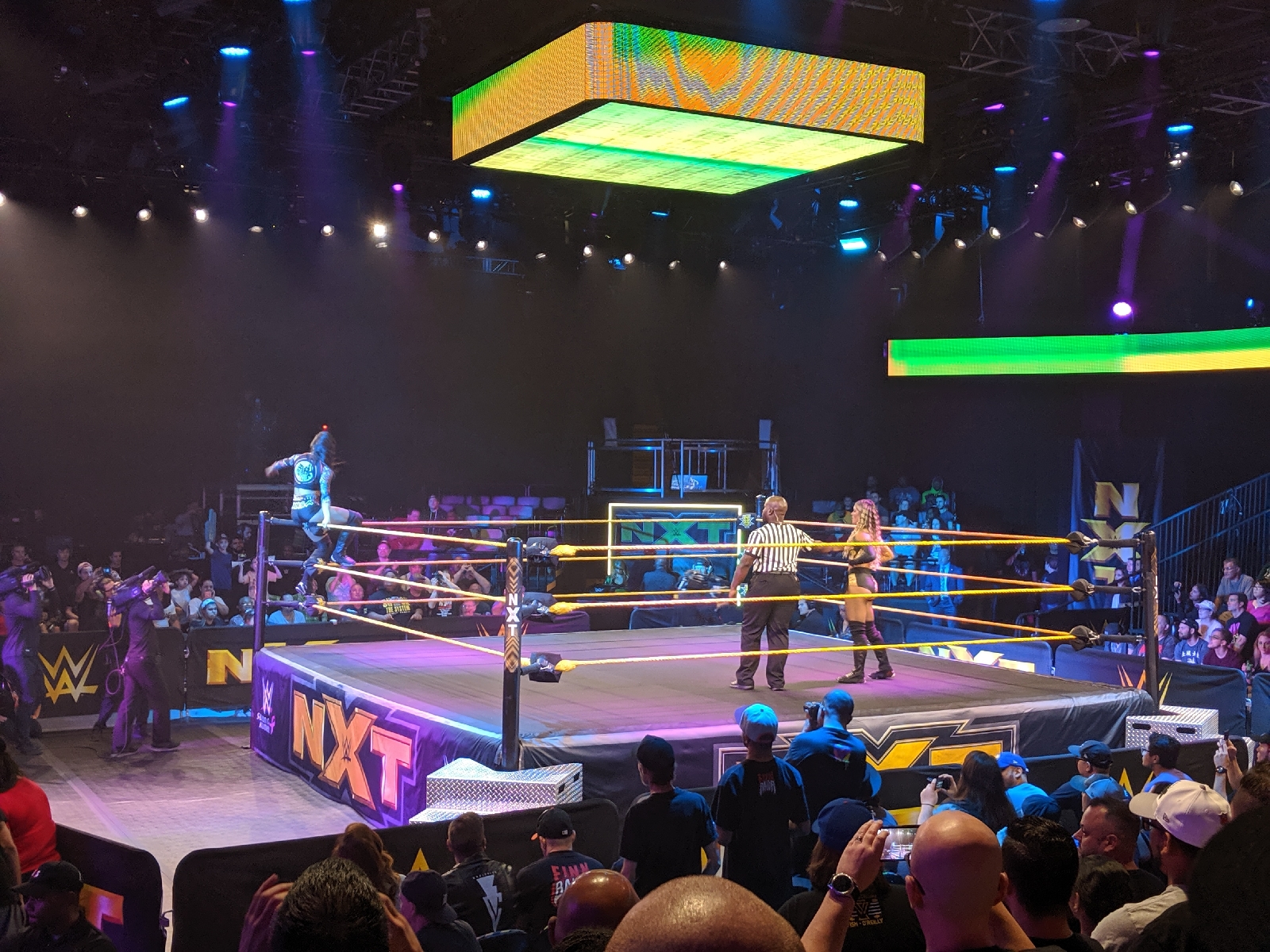 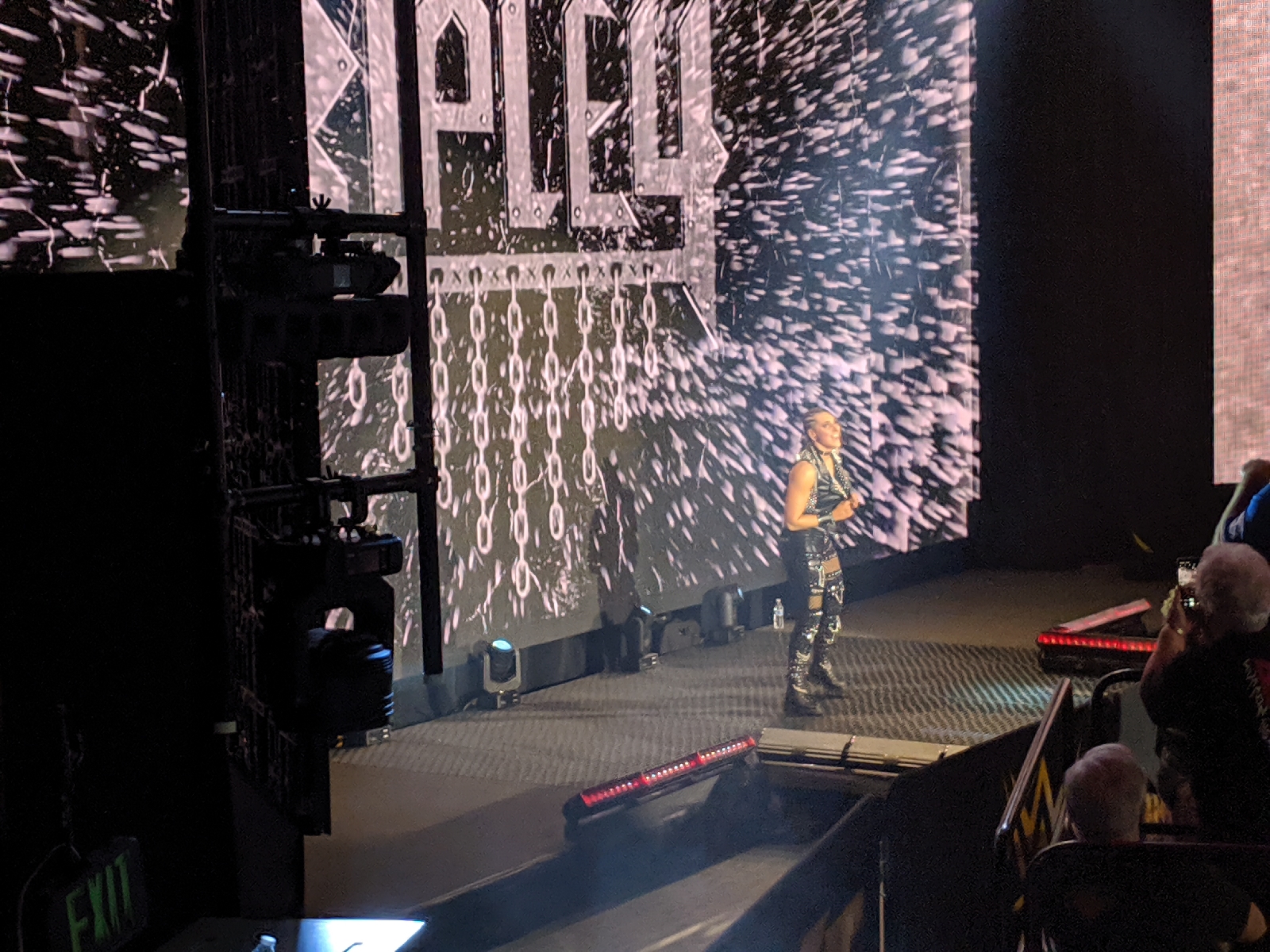 The matches were decent, but nothing too memorable. It was nice seeing Cameron Grimes (Trevor Lee) in a match where he should have gone over, and the main event was wonderful on paper Keith Lee vs. Roderick Strong vs. Donovan Dijak, but it just didn’t go off as well as I think it could have. 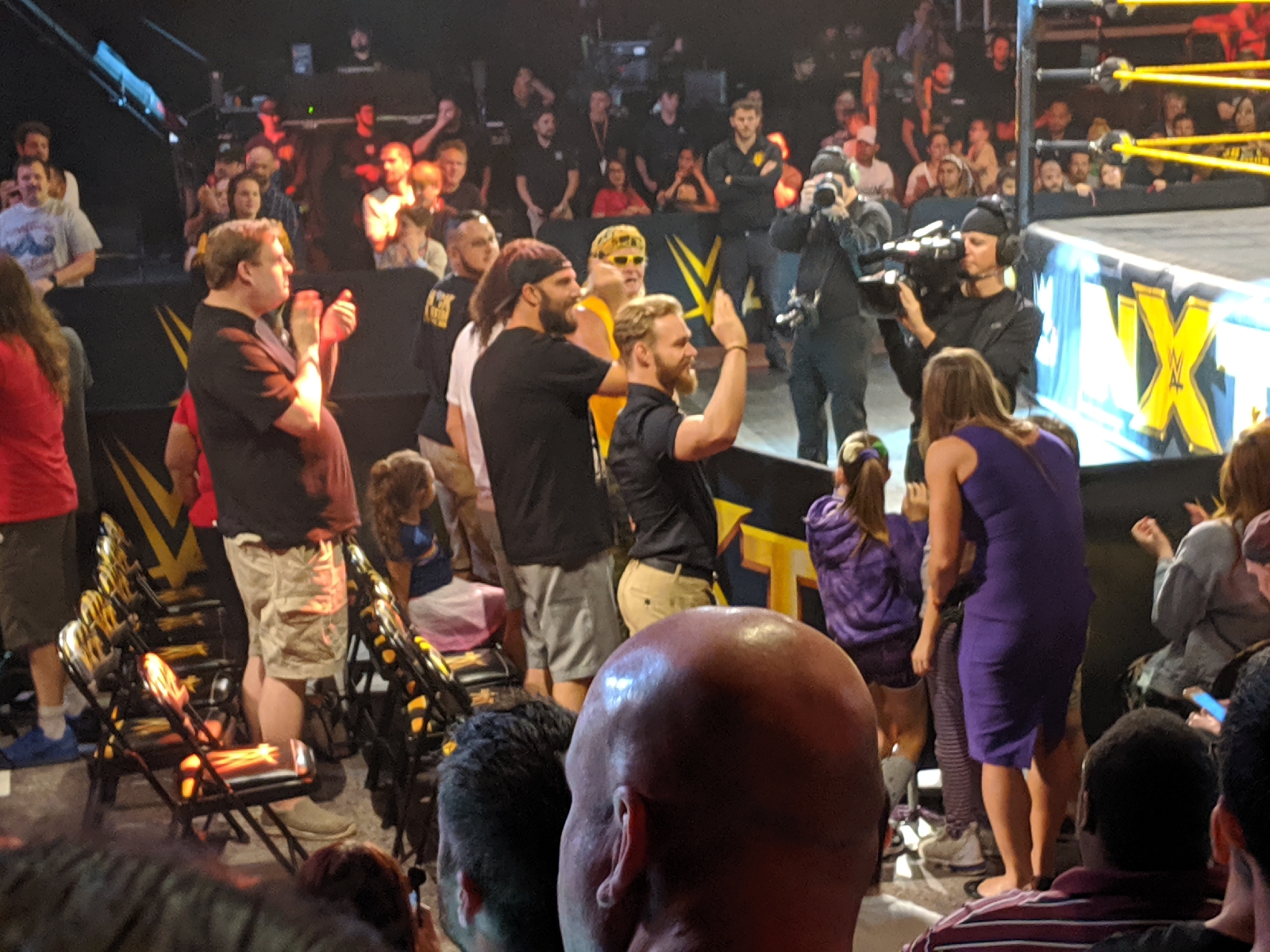 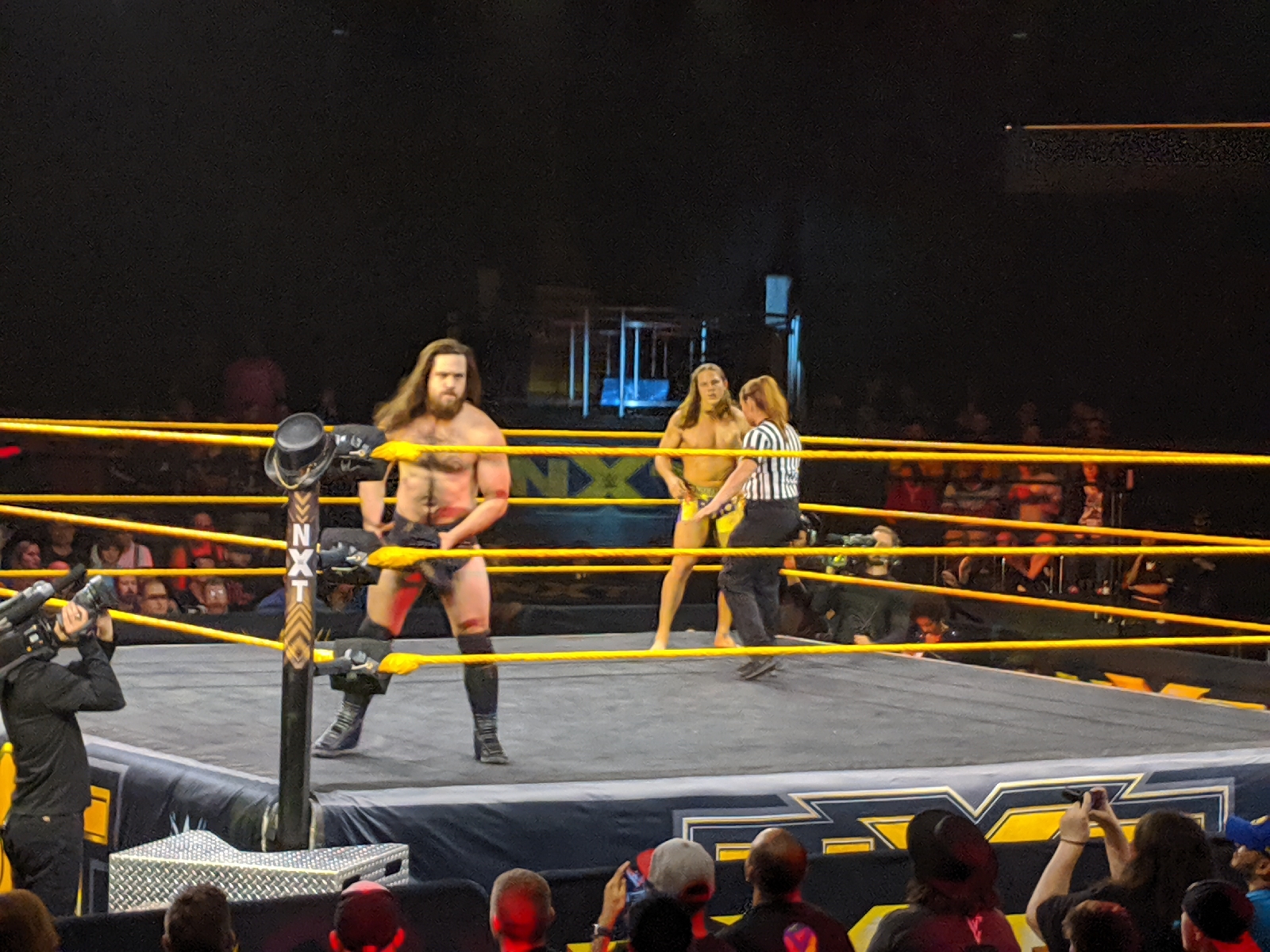 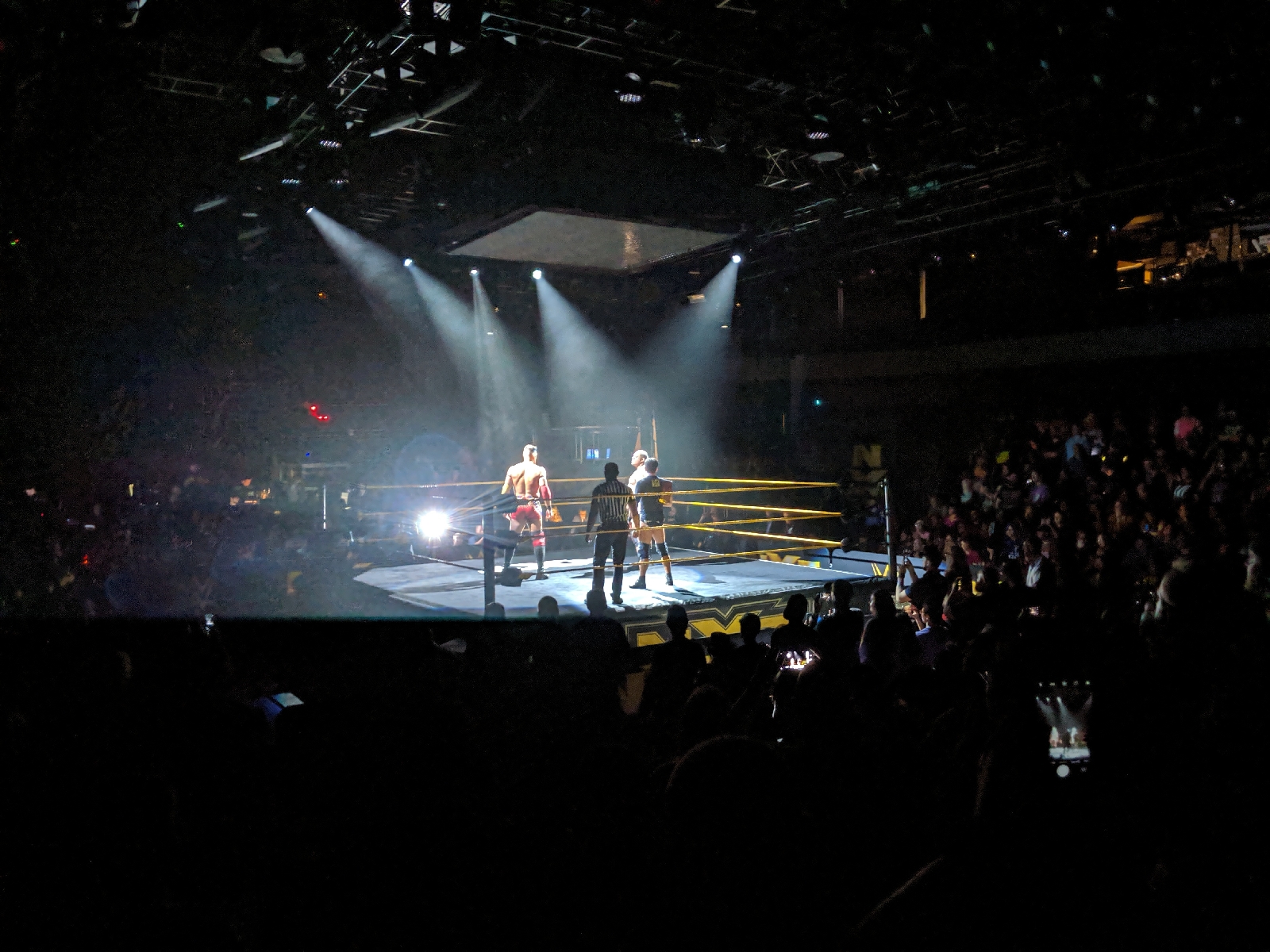 Of course, this event will always be remembered for the heel turn of Finn Balor, which was stunning and left the crowd speechless. After the attack on Johnny Gargano, they spent a lot of time putting him on a stretcher and getting him into the ambulance. Then they forgot to close the ambulance doors and this led to everyone in the arena yelling at the screen as the ambulance drove away. 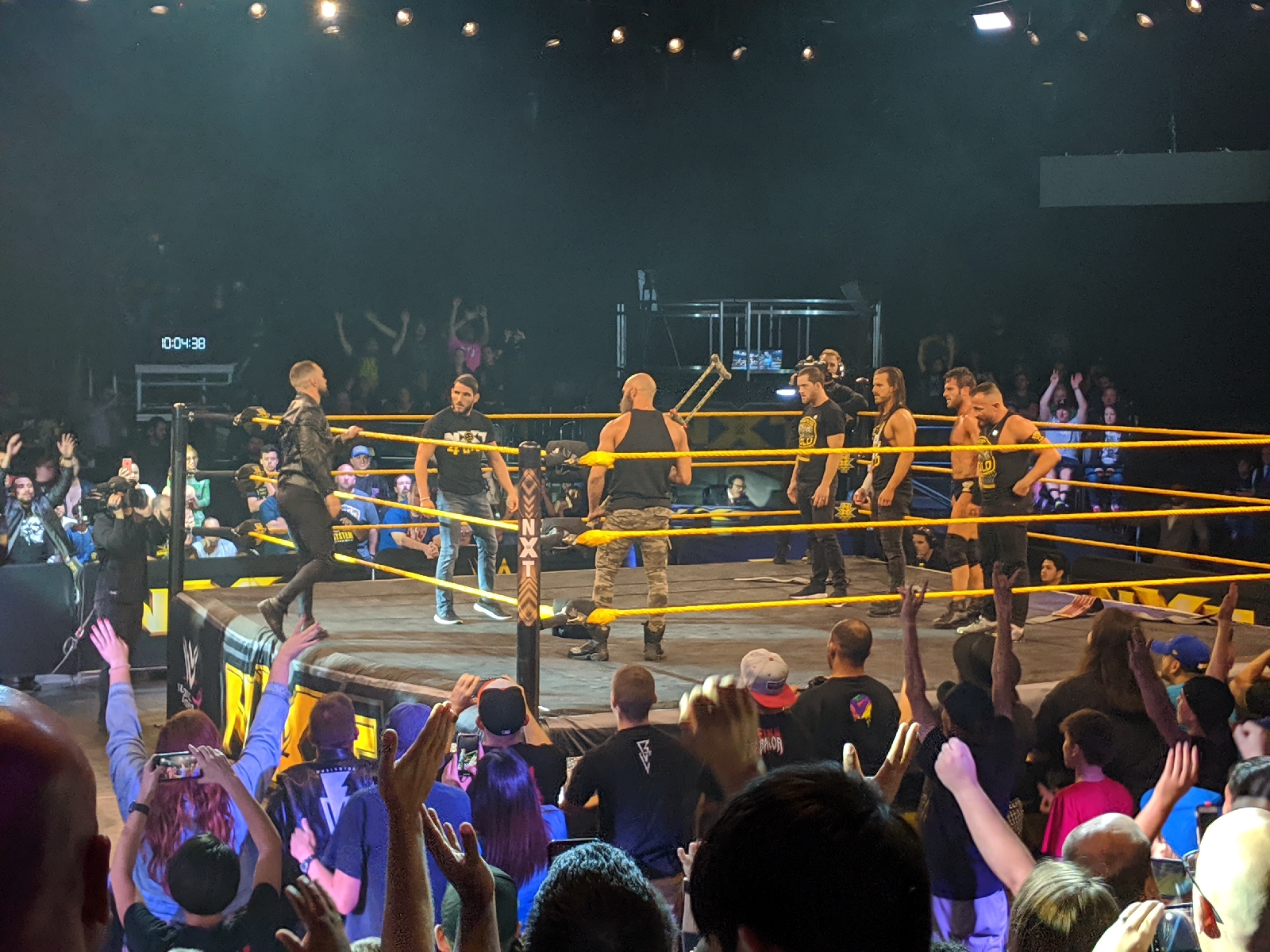 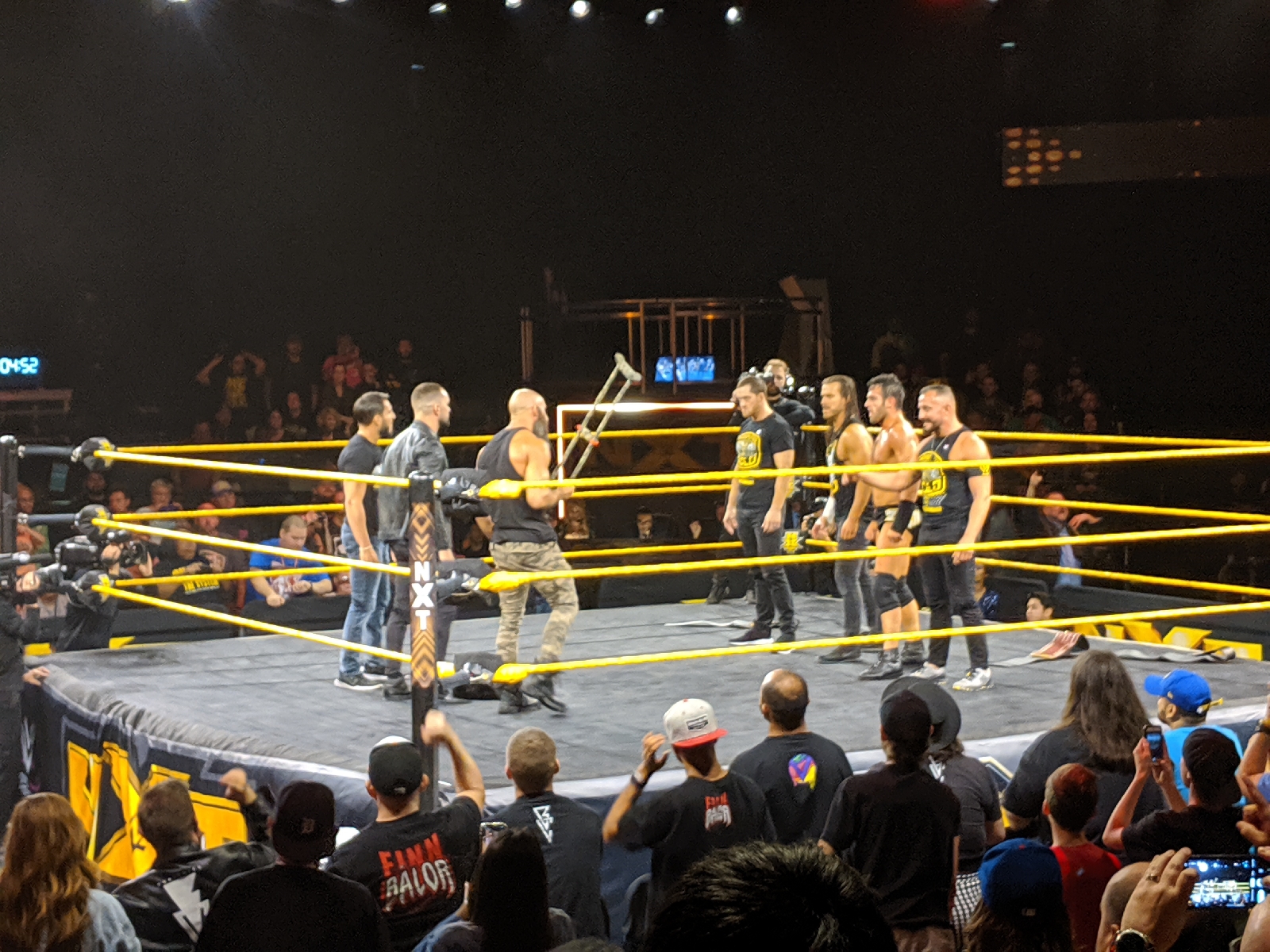 There was no closing of the show nor a  second main event following Balor’s turn, so the crowd all exited the arena rather awkwardly. I really felt like something was missing and maybe a proper closing to the show should have occurred instead of the fans just trying to squeeze out of the single entrance of the arena at once. Heck, even an announcer coming out to let everyone know the show was over probably would have helped a little.

If I lived near Orlando, I’m sure I’d be at Full Sail every Wednesday night. It’s affordable wrestling in a very cool venue. I cannot get over how much I liked the parking, how great all the seating was, and how on top of things the staff seemed to be. However, I will say as a wrestling product, it was lacking. There are no meet and greets or really anything wrestling related at the arena other than the single merch truck outside. The whole experience has that very sterile WWE feel to it and that was a bit of a disappointment, since NXT is always looked at as the grittier little brother to the flagship shows. I guess, I just assumed since NXT had a permanently weekly venue, they would put a little more effort into being a bit more in line with the popular aspects of indie wrestling, and not just a WWE lite production.

I had more fun at the NXT house show and I highly recommend checking NXT out if they ever come nearby. However, I would not make a special trip to Orlando to visit the Full Sail University, because it just isn’t worth it.
Posted by Brandon at 5:57 PM