Growing up a pro wrestling fan in the late 90’s and early 2000’s, I found myself in envy of those who imported video games. Two franchises existed outside of North America that were known to be the best of the best, when it came to wrestling games: Virtual Pro Wrestling and Fire Pro Wrestling. In America, we got various versions of the AKI engine that ran Virtual Pro Wrestling under the names of WCW Revenge, WWF Wrestlemania 2000, and WWF No Mercy. All those games were great, although it was hard to find someone online who had played Virtual Pro Wrestling 2 who’d say that the American counterparts were on par or better than VPW. 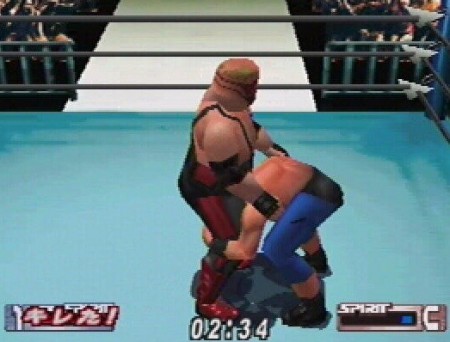 I never felt gipped by not playing VPW because I knew it was reskinned as the WWF games. Those games were amazing and have stood the test of time as some of the greatest wrestling games ever made. But when you look at a franchise that has maintained a high level of consistency and is still relevant, it’s hard to ignore Fire Pro Wrestling. 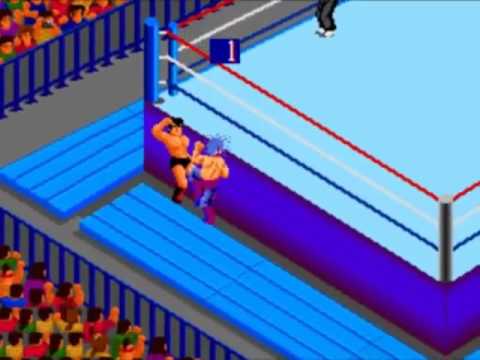 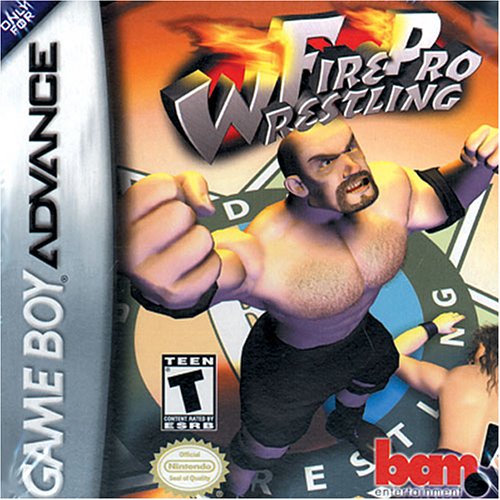 My first experience with the FPW franchise was the Gameboy Advance games. Both games featured a roster of unlicensed wrestlers who had the move sets and likenesses of vary recognizable wrestlers. It took just a little bit of editing to turn this pre-made roster into one of the greatest wrestling rosters ever and that made my day. Back in those late 90’s days, I spent a good portion of my time discussing and drawing up my dream WCW vs. WWF matches and this game made it super easy to experience them. 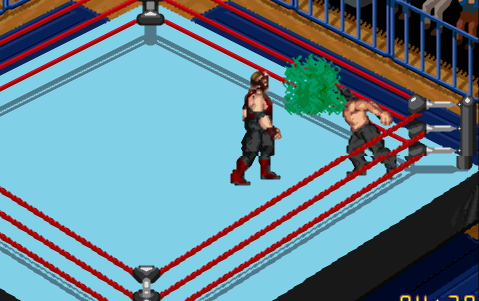 Very little has changed over the years with Fire Pro Wrestling. It still uses 2D sprites and runs on a gameplay engine that rewards timing and putting on a good match over button mashing. I once heard a GameStop employee describe the WWE 2K games as “a really bad fighting game” and I had to concur. Don’t get wrong, I’ve enjoyed the Smackdown vs. Raw and 2K franchise over the years, but it’s not a good wrestling game. It’s just the best looking (and really only) option we have.

In FPW, your goal is to tell an entertaining match not simply beat your opponent. So, if you spend the game dominating your opponent, the crowd will not find it entertaining and you will not receive a good match grade. Your goal is to pace the match out, use your big spots when they are needed, and don’t try doing moves you haven’t worked your way up to yet. For example: most matches start off with light punches, kicks and a lock up or two. No one is going to come out doing finishes or pile driving opponents, so, if you attempt to do something like that in FPW you’ll fail, or it’ll be reverse and this can throw off your momentum and screw up your match. It’s basically a game about wrestling psychology hidden behind some very nicely animated 2D graphics.

I didn’t appreciate FPW on the Gameboy Advance, but once Fire Pro Wrestling Returns hit PS2, I took the time to really learn about the game, how to play, and I found myself enjoying this very simple, but difficult game. There is a learning curve to any FPW, but once you put the time in its so rewarding and it’s hard to go back to something like the 2K series. 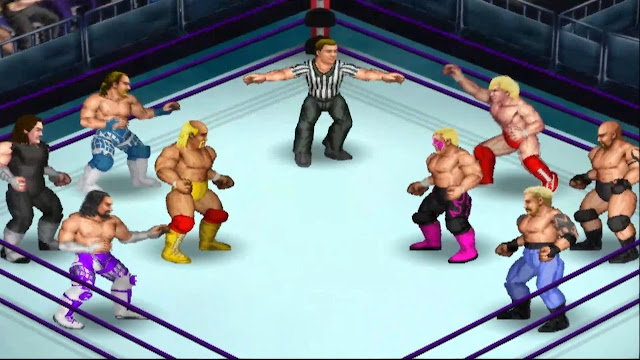 Sadly, after FPW Returns came out, the Fire Pro franchise seemed dead. A piss-poor Xbox Avatar game was released using the FPW branding, but it was a joke and didn’t resemble anything to do with the series at all. I think all of us FPW fans had secretly given up. There just didn’t seem to be anyone interested in making an unlicensed wrestling game, especially when having to compete with the WWE.

Then in 2017, a short announcement trailer was released for Fire Pro Wrestling World. I was stunned. Was this series really coming back and cashing in on the growing population of wrestling fans who are fed up with the WWE? It seemed like the perfect time to release a new wrestling game that had an aging, but built in fan-base and an already developed engine. 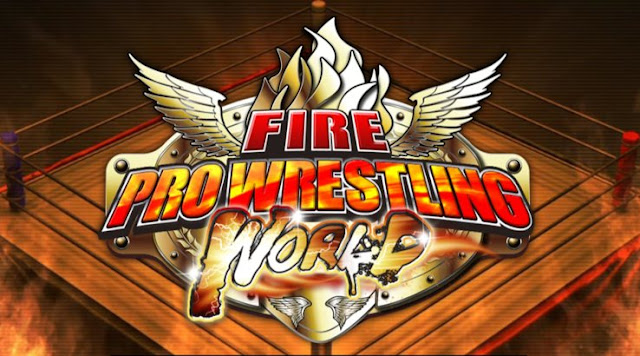 FPW World was a big hit once it hit Steam’s Early Access on PC. I purchased a copy as soon as I had a computer capable of running it well and the game gave me everything I wanted in a wrestling game in 2018. The controls were still tight and the online marketplace allows for people to upload created wrestlers, rings, logos, turnbuckles, etc. allowing for almost infinite customization to the game. FPW also features MMA matches, death matches, and just about everything in between. 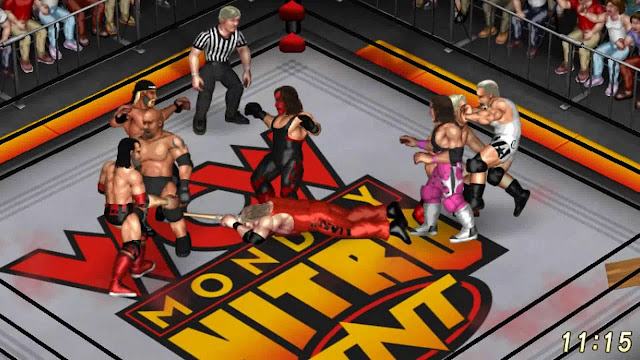 To make things even better, when FPW World finally came to PS4 a few months ago, it came with NJPW branding. Not only does it feature quite a few stars from NJPW, it also now has a story mode that centers around the IWGP Championship.


Recently, I treated myself to a copy on PS4 (How can you not for $29?) and I’m loving it. It holds up well against the PC version and it’s become something I play pretty much daily. It doesn’t have a Universe mode like the 2K series, so it’s up to you to make up your own storylines if you are into that sort of thing, but I grew up without all that stuff anyway. I just want to take a couple of interesting wrestlers and have them face off and see what happens. Some fans enjoy watching the matches so much they actually simulate the matches and just watch them. I’m definitely not like that. If I want to watch wrestling, I’m going to watch wrestling, not a 2D video game simulation, but to each his own. 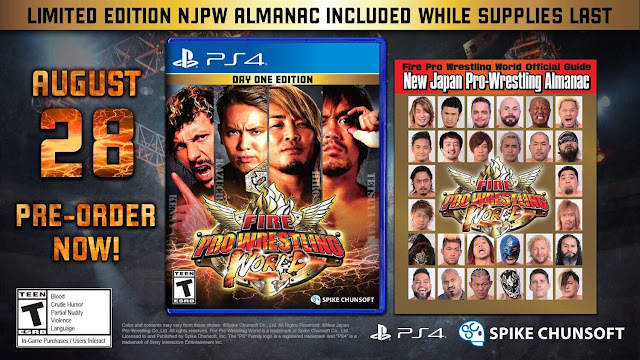 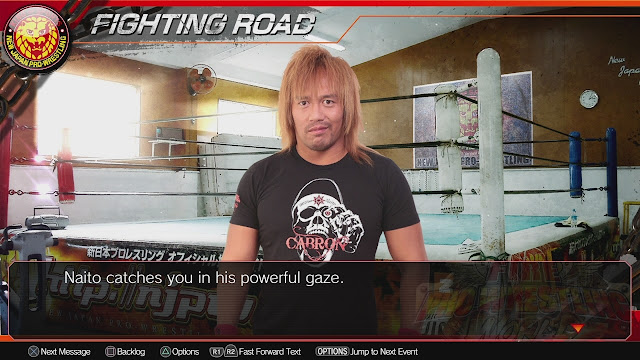 For a vast majority of wrestling fans, I don’t think Fire Pro Wrestling World is going to wow them. The graphics, while pretty, are dated and you have to invest some serious time in learning how the strategy and timing system work. The game doesn’t hold you by the hand, but if you put the time and effort into it, it’s really hard to go back to something like 2K. In my eyes and in what I look for in a wrestling video game, Fire Pro Wrestling World is vastly superior to anything 2K has released. But it’s a very similar argument of fans of NJPW or the WWE. One is easily accessible and easy to follow, while the other takes some time and patience, although in the long run, I feel like the reward is worth the effort. If you have a PS4 or a decent PC and love wrestling, I highly recommend checking out Fire Pro Wrestling World. It’s quite rewarding.
Posted by Brandon at 12:54 AM