Last Sunday, I attended AML/IMPACT Wrestling’s Confrontation in Greensboro, North Carolina. This was my first AML show since Wrestlecade last November and my first IMPACT show since 2011. 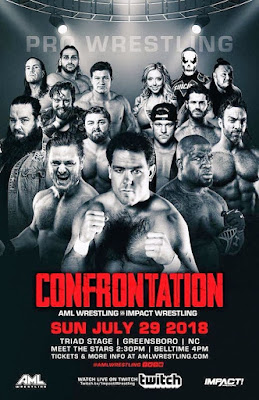 Confrontation aired live on Twitch and can still be viewed at this link. Since the event is available for everyone to see, I’m not going to focus so much on reviewing the matches, but instead, discussing how the event occurred from my perspective. 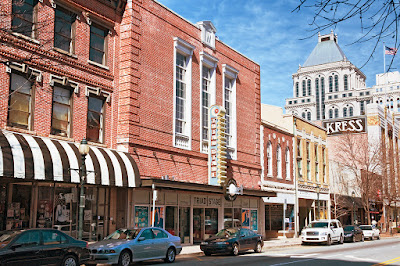 The show took place at the Triad Stage in downtown Greensboro, North Carolina. The Triad Stage is known for hosting theatrical plays, not wrestling, but that gave the event a special feel and the seating was excellent. There was plenty of room for everyone to see and I felt an intimacy with the ring that I’ve never felt before. It didn’t leave a lot of room for outside the ring antics, but it provided everyone with a wonderful view and I’m so glad they chose to hold Confrontation here rather than one of AML’s usual locations. 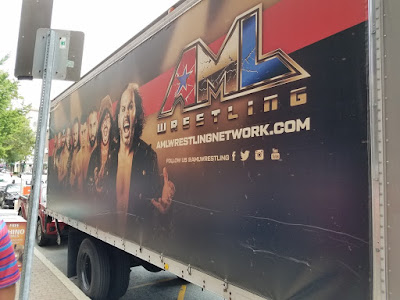 My father joined me in attending Confrontation and we arrived at the Triad Stage around 2 PM. The doors opened at 2:30 PM for the meet and greet with a bell-time of 4 PM. We were greeted at the door by AML owner Tracy Myers, who made some small talk and pointed us over to the table to pick up our Meet and Greet tickets. 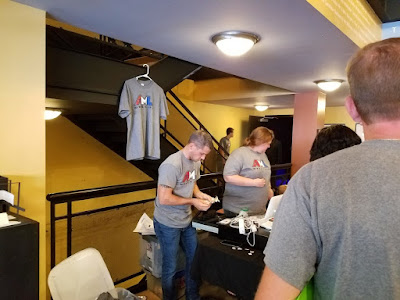 The Meet and Greet was amazing. AML offered a $20 ticket which got you a poster, autographs, and pictures with all of the talent with exception of Tully and Tessa Blanchard and Allie.

The meet and greet took place above the lobby, which was interesting. Basically, a hallway stretches around the edge of the lobby on the second floor, and all the wrestlers were set up with merch tables, and you just hopped in line and made your way around the circle. 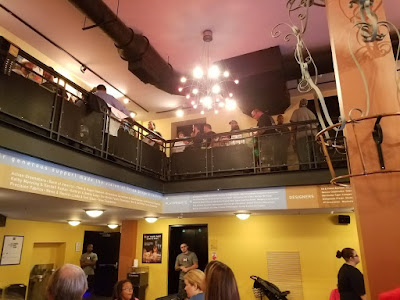 It was hot, cramped, and crowded, but the line moved at a decent pace and I have no major complaints. We were greeted by George South, who is always a great ambassador for AML, and he pointed us on our way.

I’m a fan of Allie and knew I’d have to pay extra for a picture. It was $10 or free with a purchase of anything. I really want the Demon vs The Slayer DVD, but I want it autographed by both Allie and Rosemary, so I decided to opt in just for the photo. 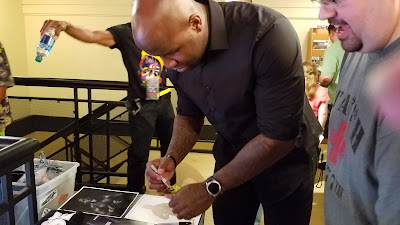 I was shocked when I reached Moose, at the end of the line and asked for a picture and he asked for $10. He was nice about it, but the Meet and Greet didn’t mention Moose as being an exception and it was unexpected. Having been caught off guard, I decided to go ahead and go with the photo instead of just walking away but I really wish this would have been made clear. 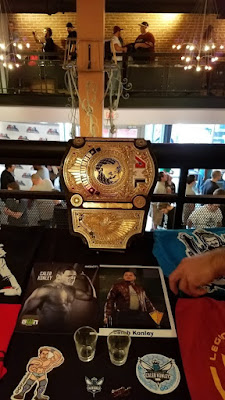 As far as the nicest and most accommodating wrestlers: Chris Payne, Preston Quinn, Billy Brash, and Fallah Bahh stood out. Those guys are all very classy and seemed to really enjoy interacting with the fans. If I was booking a wrestling show, these four men would be on it every time.

The only wrestlers who weren’t in the Meet and Greet were Kristen Stadtlander, CW Anderson, and Cam Carter who was a substitution due to Moose’s concussion. I was bit bummed about missing Kristen, but I think she was traveling from Queens of Combat at Raleigh SuperCon so she may not have been in Greensboro yet.

After finishing up with the meet and greet, we dropped off our stuff at the car and cooled down a bit outside. We then made it back inside and found our seats near where Josh Matthews and Sonjay Dutt were already live on the Twitch pre-show. 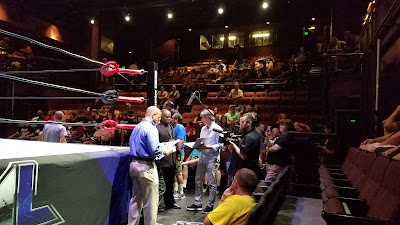 The show started on time and ran around two and a half hours with no intermission. With exception of Moose cutting a small promo, it was pretty much non-stop wrestling action the entire time. Here are a few thoughts on the matches: 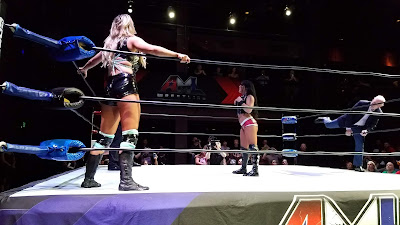 This was a decent match that I expected to be dominated by Tessa and Allie. Surprisingly, it was Kristen that really impressed me. She moved well in the ring, had a good presence, and showed up to wrestle. My biggest takeaway from this match is that Kristen Stadtlaner is someone to watch for in the future. I think she’d make a great addition to IMPACT’s roster.

Moose came out and cut a promo apologizing for not being able to wrestle due to his concussion. He promised to come back to AML in the future to make up for this, but I’ve yet to see a wrestler actually show back up after cancelling or suffering an injury. 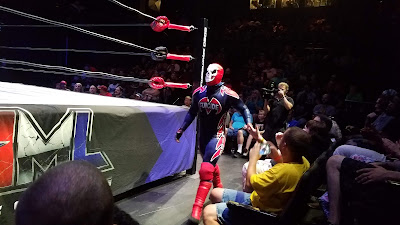 It was pretty obvious that Suicide was not the same guy we took a picture with earlier in the night, which would make sense since it’s usually Caleb Konley under the mask. This match never really got off the ground and didn’t do much for me. 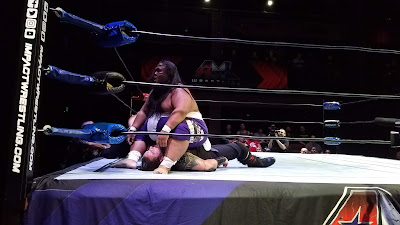 This was our comedy match for the evening and it was a nice change of pace. Dawson and Bahh seem to have good chemistry in the ring, and the match was entertaining. 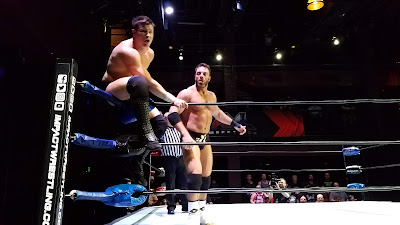 Wow did this match go way too long. It was basically a squash match that just never seemed to end with a twist ending. I was really excited for this match, but it was badly booked and slowed down the show. 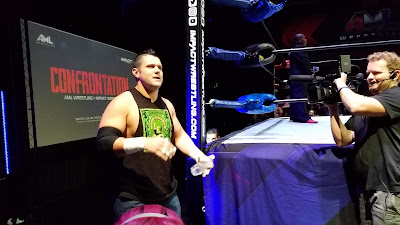 This was probably my second favorite match of the night. It wasn’t a great technical classic, but it was a lot of fun. Edwards tore up Chris Payne’s chest, and the two guys kept the crowd entertained during this borderline hardcore war. I was really impressed with the beating Payne took and the little bit of offense he got in. I’d love to see him in a proper match.

Billy Brash vs. Brandon Scott vs. Devin Driscoll vs Sean Denny vs Gifted One Yahya vs. Cam Carter 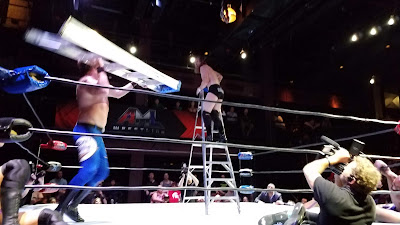 This is your must see match from Confrontation. These guys tore it up and what’s even more impressive is there were no IMPACT wrestlers in this match. These were AML wrestlers with Devin Driscoll and they put on a show for all the fans. The Gifted One Yahya impressed everyone with his awesome somersault over the turnbuckle and I’d be amazed if IMPACT didn’t pick up a couple of these guys in the future. This was my first ever live ladder match and it was awesome!

We needed a cool down match before we got to the main event and this was that. It was an old school, beat em up match, and I always like that. The match wasn’t special, but it did set up the next AML event, since the Heavenly Bodies managed to win the tag team titles after interference by Dave Dawson. 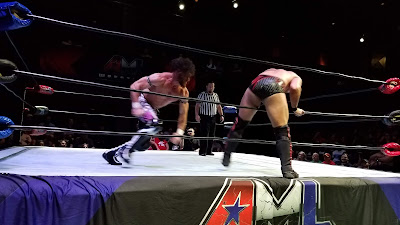 So, I’m not going to lie. I was crazy excited for this match. I figured this would be the best exposure for Caleb Konley to showcase his skills and Matt Sydal is a great opponent to make him look like the champion that he is. Sadly, the match just didn’t work. I’m not sure if it was a chemistry issue or what, but the match never moved into that “awesome” territory and once Moose came in for the save, the entire match felt useless. I felt like Moose’s interference made Konley look weak to regular IMPACT fans who are used to seeing Konley in a reduced role.

Overall, the show was very forgetful outside of the ladder match. It wasn’t a bad show at all, but it just wasn’t a special IMPACT show like I had expected. Instead, this was an AML show in a unique venue featuring a handful of IMPACT wrestlers.

Nonetheless, this event has to be viewed as a success for AML. There were a ton of eyes on the product thanks to the live streaming on Twitch and the venue was at least 85% full. 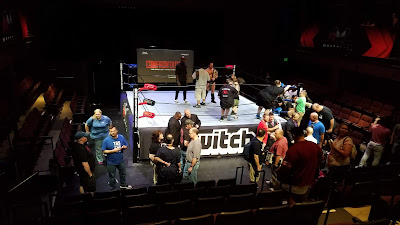 I cannot stress this enough, but this was the most comfortable I’ve ever been watching wrestling. We had padded seats, stadium seating, and an up-close view of the ring. It was absolutely wonderful and I wish all wrestling events took place in a venue or similar set up to the Triad Stage.

I loved the Meet and Greet ticket, and I’d definitely be interested in seeing more of these all-encompassing tickets in the future. Heck, even for regular AML events I’d pay $10 to meet and get photos with all the wrestlers in attendance outside of the headliner. That $10 would also get fans to visit all the merch tables and give the wrestlers an opportunity to sell some wears.


I also gotta give AML credit for having a ton of staff on hand. In the past, I've been critical of AML/Wrestlecade events because its difficult to find people to help if you have a question. During Confrontation, I noticed a ton of staff in AML shirts posted all around the lobby ready to help fans. It was awesome and this was a huge improvement over previous events I've attended.

My only real critique of how the show was handled was one small bit of drama that happened in the row in front of me. When Moose came out for his promo a family made their way to the front row. The people sitting in the front had already been shifted over and this family caused a bit of an issue moving everyone back down to get into their seats. This is something that is not too unusual in wrestling, but what was unusual was the fact that they brought a newborn in a stroller to the front row. They left the child in the stroller, right where most of the wrestlers were walking to the ring, and this was a recipe for disaster. Despite having some AML folks nearby, nothing was said about this dangerous situation until a fan in the front row insisted that the mother pick up the child for its safety.

Even then, holding a new born in the front row of a show without any guardrails is absolutely child endangerment in my eyes, and I know the AML officials are busy running a show but something should have been said. After a couple of matches, I believe the mother realized how dangerous this was and she took the baby to sit somewhere else.

I’m all for all-ages show, but maybe it should be ages three and up. The world is lacking in common sense and I’d hate to see someone hurt or the product to suffer because someone is too naïve or stupid to realize that bringing a newborn to a professional wrestling show is a terrible idea. But, that’s just my opinion.

AML/IMPACT Confrontation was a blast to attend and I had a lot of fun. It may not have been a homerun as far as the in-ring action, but the setup and presentation was wonderful. If you decide to check out the VOD of the Twitch broadcast, be sure to watch the ladder match, it begins around two hours into the show. If I had to recommend anything from this show, it would be that match.
Posted by Brandon at 5:54 PM